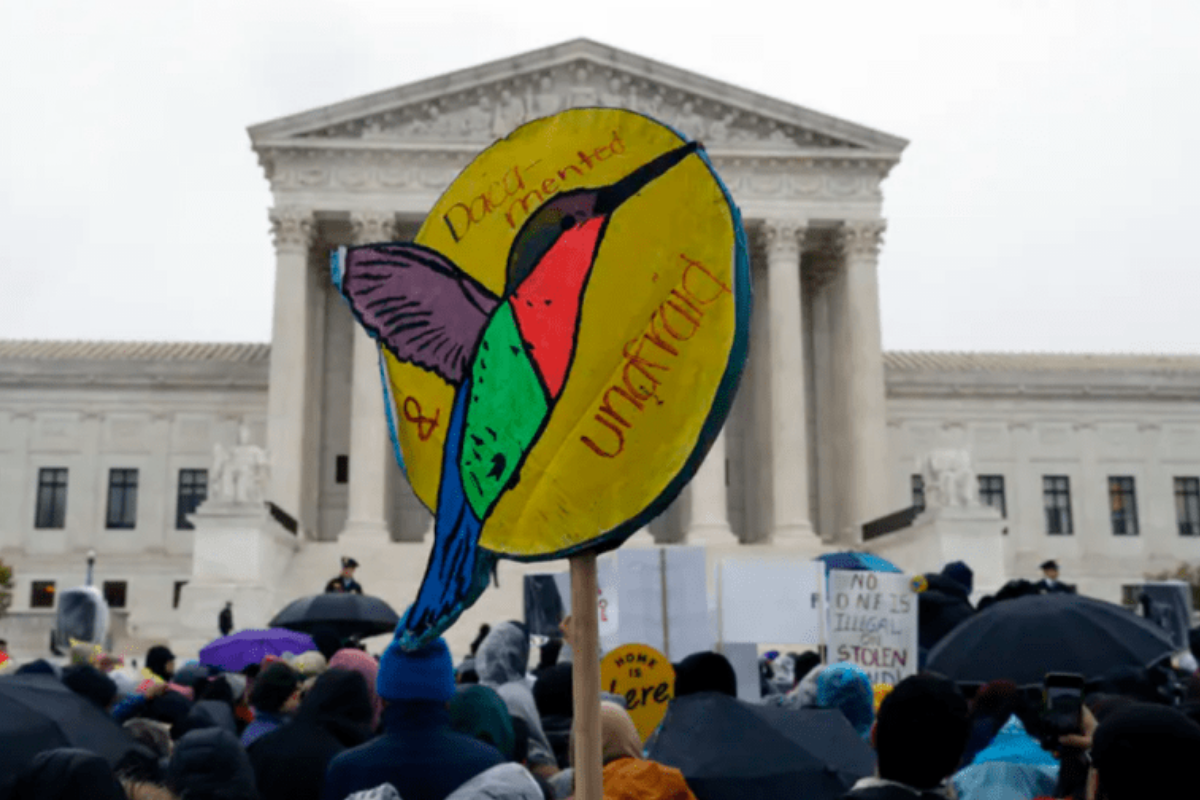 People rally outside the Supreme Court as oral arguments are heard in the DACA case on Nov. 12. (AP Photo/Jacquelyn Martin)

By Aviva Rutkin, The Conversation

The future remains uncertain for a group of young people who were brought from other countries to the U.S. as children without legal authorization.

Currently, these young people are protected by the Deferred Action for Childhood Arrivals program, or DACA. This Obama-era program shields around 700,000 to 800,000 people from deportation. On November 12, the Supreme Court heard arguments on the Trump administration’s decision to end the program.

The hearing involves three separate cases challenging the Trump administration, brought by six New York DACA recipients and the advocacy organization Make the Road New York, the National Association for the Advancement of Colored People and the University of California.

President Donald Trump first announced he would rescind DACA in 2017. However, lower court rulings have blocked the administration from ending the program.

Here is a roundup of archival stories to help you follow along.

DACA came with a long list of terms and conditions. For example, to apply you had to be a certain age and meet certain educational requirements.

Immigration scholar Kevin Johnson of the University of California, Davis, points out DACA offered protection for only about 1.8 million of the estimated 3.6 million people who were brought to the U.S. as children.

Of those 1.8 million who were eligible, only about 800,000 actually applied and received protection through DACA.

It’s important to point out that DACA also does not apply to “unaccompanied minors.” You may have heard the term used especially in 2014, when unprecedented numbers of children traveling alone were arriving at the U.S. border with Mexico. Generally, these case are handled under a different set of laws and policies.

Stephanie Canizales, a Ph.D. candidate at the University of Southern California, Dornsife, has spent time doing in-depth interviews and observational research on this group of migrants, who face a separate set of issues around labor exploitation.

Canizales writes, “Undocumented working youth migrate to Los Angeles in hopes of working to support their families who remain in their home countries.… Much like with their adult coworkers, economic necessity and fear of removal from the workplace and the country keep undocumented migrant youth workers quiet in cases of exploitation, and docile and efficient on the job.”

There is research that shows that DACA has improved the mental health of those who received it.

Scholars Elizabeth Aranda of the University of South Florida and Elizabeth Vaquera of George Washington University explain that being an undocumented immigrant in the U.S. carries severe mental health consequences. These include problems such as chronic worry, sadness, isolation and even suicidal thoughts.

Although DACA may offer only temporary protection, the relief recipients felt was significant. Aranda and Vaquera write, “These youth shared with us that they were more motivated and happy after Obama’s executive order. As Kate, one of our participants, told us, DACA ‘has gone a long way to give me some sense of security and stability that I haven’t had in a very long time.’”

4. Dreamers Would Boost US Economy

For example, take City University of New York sociologist Amy Hsin’s study that shows what would have happened if the DREAM Act had passed in 2017.

She found that it would have had no significant effect on the wages of U.S.-born workers. It would have created more economic opportunities by encouraging documented immigrants to make education gains. Hsin wrote, “Overall, we estimate that the increases in productivity under the DREAM Act would raise the United States GDP by US$15.2 billion and significantly increase tax revenue.”

An updated version of the DREAM Act, called the American Dream and Promise Act,passed the House on June 4, but has yet to be voted on by the Senate.

5. The Moral Argument For Dreamers

Arguably, at the core of the effort to protect Dreamers is a belief that the U.S. has a tradition of embracing those who arrive at its shores seeking a better life.

However, a quick scan of history would reveal that the U.S. has not in fact always been so welcoming. As Carrie Tirado Bramen of the University at Buffalo explains, many writers have described U.S. history as an “ongoing duel between generosity and greed.”

Bramen writes that DACA gets at the core of American identity: “At stake is not only the fate of the Dreamers, but also how the country and the rest of the world understands the idea of America.”

6. What Americans Think About Immigration

What do Americans make of the debate over DACA?

According to recent polls, “Americans have never felt warmer toward immigrants, nor have they ever been more supportive of immigration,” writes Mariano Sana, a sociologist at Vanderbilt University.

He finds that somewhere between 62% and 81% of Americans consistently support offering undocumented immigrants documentation with a path to citizenship.

This is an updated version of an article originally published on Feb. 14, 2018, authored by Danielle Douez.