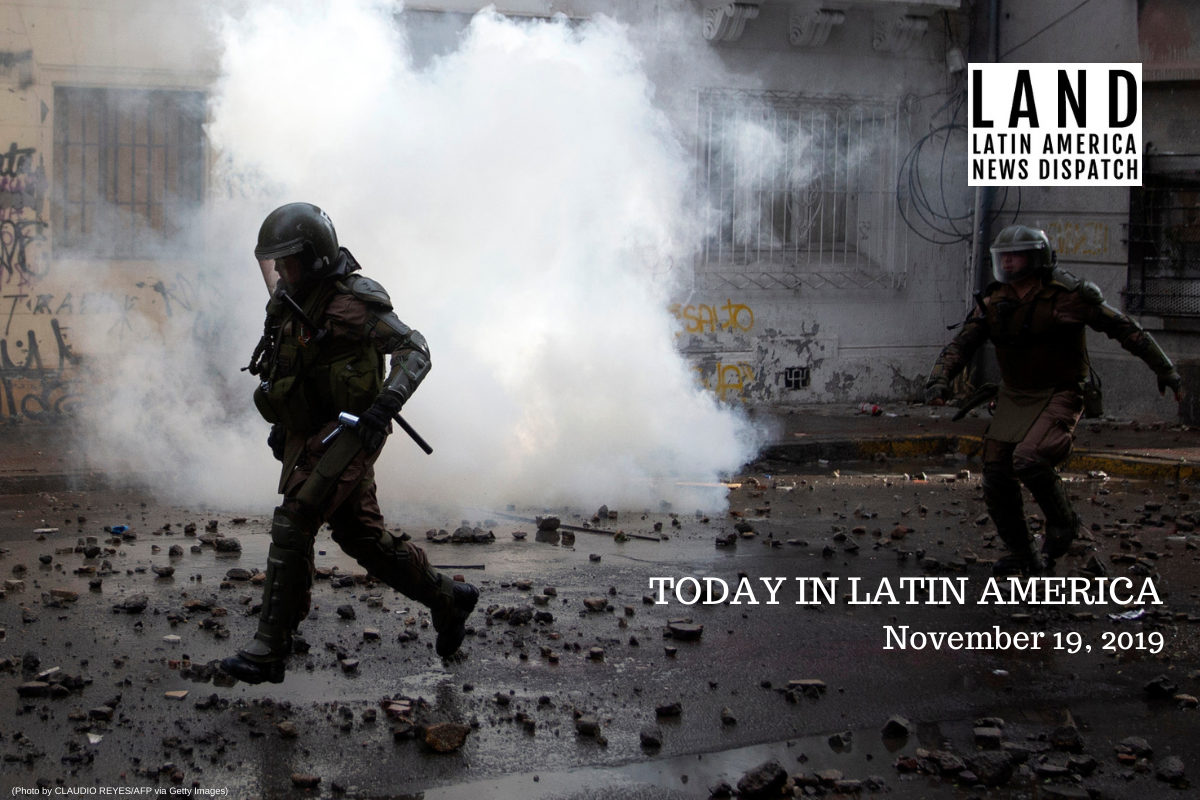 Riot police members run amidst stones and tear gas, during a protest against the government in Santiago on November 18, 2019. (Photo by Claudio Reyes/AFP via Getty Images)

CHILE: President Sebastián Piñera admitted for the first time during a televised speech that the Chilean police abused protesters at recent demonstrations. He acknowledged that “abuses and crimes were committed, and the rights of all were not respected.” The abuse allegations against security forces range from torture to sexual abuse.

However, Piñera also criticized protesters, saying that they engaged in violent acts, such as arson and attacks on security forces. Piñera announced that there will be no impunity for either protesters “nor for those [security agents] who committed excesses and abuses.” Twenty-two people have died in the protests and 2,300 more have been reportedly injured.

VENEZUELA: Venezuelan opposition leader Juan Guaidó attempted to reignite the movement he started earlier this year to drive President Nicolás Maduro from power yesterday. However, he struggled to draw protesters into Caracas’s streets. After Guaidó urged Venezuelans to take to the streets, only several dozen people arrived at demonstrations. Guaidó initially drew huge crowds when he declared himself interim president in January. Many thought he would bring imminent change, but Maduro remained in power with support from the country’s military.

BOLIVIA: Last Friday, Bolivian security forces attacked a crowd of demonstrators in Cochabamba, who were rallying in support of former President Evo Morales. The attack turned into a massacre as security forces killed nine Indigenous people. In response to this massacre, tens of thousands of Bolivians took to the streets of Cochabamba yesterday to protest the killings and the government led by self-declared President Jeanine Áñez. Due to these protests, residents in several cities across the country have reported food and gasoline shortages, and many shops in La Paz have closed.

HAITI: Hundreds of national police officers took to the streets of Port-au-Prince on Sunday to protest for better work conditions and the right to unionize. In Haiti, the right to form a union and regulations limiting shifts to eight hours are protected by the constitution. However, these rights are often violated. Police also protested for higher salaries as officers with the Border Police Unit earn only about $208 a month. Yesterday, more protests broke out after a speech by embattled President Jovenel Moïse, and four people were shot.

NICARAGUA: Nicaragua charged 16 opposition activists for the alleged transport of weapons yesterday. Among the suspects are 13 social leaders who brought water to hunger strikers protesting against the arrest of relatives who they claim are political prisoners. The activists were arrested last Thursday while trying to enter a church in Massaya. Defense attorney María Oviedo said the charges are based on a police report that claims that police officers found handguns, a shotgun and explosive devices when they apprehended the opposition activists. The activists face a minimum of five years in prison.

COSTA RICA: Costa Rica’s Banco Popular has launched a program to assist 22,000 indebted Costa Ricans. In its first stage, the bank will refund credits to people and companies that have at least one account with the bank. The aim of the program is to lower the payment amount and interest rates of customers’ debts. The bank will initially provide at least 40 million colóns worth of refunds.

MEXICO: Mexico’s senate is considering classifying the unauthorized use of Indigenous designs as cultural plagiarism. The proposal would penalize the theft of Indigenous cultural traits with fines of up to $218,000. According to the nonprofit Impacto, from 2012 to 2019, at least 23 national and international brands have appropriated designs from communities in Oaxaca, Chiapas and Hidalgo. The senate proposal would provide the legal framework that communities need to intervene when their culture is used without their consent.

MEXICO: President Andrés Manuel López Obrador defended his plan to give pensions to Indigenous people starting at age 65, as opposed to 68 for all other Mexicans. AMLO campaigned on a platform of helping Indigenous communities and has argued that Indigeneous seniors have poorer health outcomes than other Mexicans. Amid critiques of preferential treatment and racism, AMLO said he regretted that providing social programs to Indigenous people is being seen as discriminatory. He also explained that his plan would be integrated into the Mexican constitution to ensure these seniors’ rights.

MEXICO: AMLO announced Sunday that an auction of confiscated jewelry will fund highway upgrades between Tepic and La Yesca in Nayarit, an area that is nearly impassable due to landslides. The jewelry, which is currently in the possession of the federal Attorney General’s Office, is worth $13.5 million, but AMLO believes the auction could generate even more revenue. In addition to improving the highway, AMLO pledged to continue to support social programs in Nayarit, including a measure to provide people with reliable internet coverage.