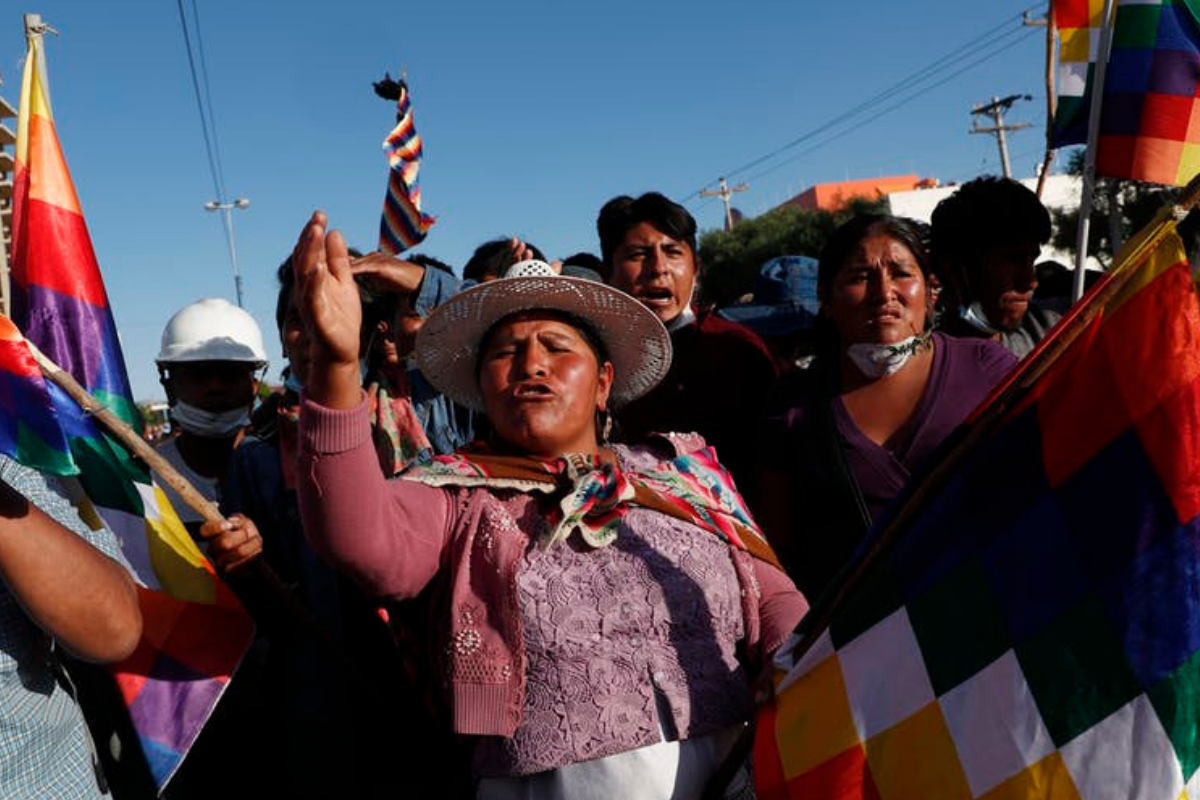 Days after the powerful Bolivian leader Evo Morales was forced to resign as president after allegations of election fraud, Bolivia’s new interim president made her first public appearance.

“This Bible is very important to us. Our strength is God,” said the 52-year-old politician from the lowlands province of Beni, holding the modern, pink-covered book up for the cameras. “Power is God.”

Invoking a Christian god as the source of political power, while commonplace in many countries, is a radical departure in Bolivia after Morales’ 14-year tenure.

Morales, a native Bolivian of Aymara indigenous descent, was the South American country’s first indigenous leader since independence from Spanish colonial rule in 1825. Indigenous people and symbols —like the multicolored Wiphala flag that represents the many Andean indigenous groups, and the Andean cross, or chakana— filled the halls of power in Bolivia during his three terms.

Bolivia, a mountainous country north of Argentina, is 41 percent indigenous, according to the 2012 census. Most of the rest of Bolivia’s 11 million people consider themselves to be mixed race, though analysts say that self-reported census data tends to undercount the indigenous population.

Religion does not map neatly onto ethnic divisions in Bolivia. Only around 4 percent of Bolivians claim to practice indigenous religions. The majority —about 75 percent— are Catholic, and 18 percent belong to evangelical or other Protestant denominations.

However, as my ongoing research shows, religion, ethnicity and culture are tightly woven together in the Andes region. In Bolivia, as elsewhere in Latin America, indigenous people may belong to Christian churches and also observe native religious practices.

Since independence, Bolivian political leaders have promoted the country’s Hispanic and Catholic heritage, not in addition to its indigenous history but to the exclusion of it. In the 20th century, indigenous people who revolted against their economic and social marginalization were brutally repressed.

Morales, a former coca farmer, recognized indigeneity as the heart of Bolivian nationhood.

Under Morales’ leadership, Bolivia’s name was changed to the Plurinational State of Bolivia in 2009, and the law now recognizes 36 indigenous languages and ethnicities. Morales also protected the right of indigenous communities to practice their religion. August became the Month of Pachamama, the Andean mother earth—30 days of ancestral celebrations kicked off by the ritual sacrifice of llamas and other animals on the banks of Lake Titicaca.

Morales, who has taken asylum in Mexico since resigning as president, also worked to separate church from state in Bolivia. Bolivia’s new constitution, written in 2009, formally ended the Catholic Church’s designation as the protected religion of the state.

Morales is Catholic. But he is openly critical of the Catholic Church, which supported the Spanish colonization of Latin America in the 16th century and, throughout the 20th century, aided Fascist party organizing.

In 2015, he famously gave Pope Francis a hammer and sickle crucifix designed by the Bolivian priest Louis Espinal before his assassination in 1980—a symbol of Liberation Theology, a progressive Latin American strand of Catholicism that challenged dictatorships and championed the cause of the poor during the 1970s and 1980s.

Morales’ secular agenda was met with criticism from conservative Christian groups. Some viewed the reforms as fomenting “paganism.” Others said he promoted atheistic socialism.

The interim administration in Bolivia has ties to the conservative Christian groups that were highly critical of Morales throughout his administration.

As senator, interim President Áñez made openly anti-indigenous statements. In a 2013 tweet, now deleted, she referred to native Aymara celebrating their new year with ancestral rituals as “satanic.”

And just five days before her inauguration, Áñez mocked a group of indigenous Quechua men on Twitter because they were dressed in ritual vestments with modern shoes and blue jeans, writing, “Original Peoples???”

Her rise to power has reignited some of the anti-indigenous sentiment that was so dominant in Bolivia before Morales’ administration. Since Morales’ ouster, there are reports of Wiphalas flags being torn down and burned. Police officers and military members were filmed cutting the indigenous flag from their uniforms.

“Bolivia for Christ, Pachamama will never again enter this palace,” said the protest leader Luis Fernando Camacho, an Áñez ally, kneeling before the Bible on the Bolivian flag at the government palace on November 10.

Indigenous Bolivians are concerned about the direction their country is headed under Áñez, though she may only be in power for a few months until new elections are called.

In the days since Morales left office, masses of Morales supporters have marched in from the countryside to convene in Bolivian cities, where they’re calling for the end to the interim government.

Many say they fear repression from the military under the interim government. They worry that the political violence that has gripped Bolivia since its Oct. 20 election will turn into a racialized, religious violence targeting indigenous people.

“All of us who have Indian-looking faces are signaled as part of Morales’ party, especially indigenous women,” the feminist activist Adriana Guzmán said to the news outlet Telesur news after Morales’ removal.

With dozens dead and more than 700 injured in military operations ordered by Áñez “to re-establish order,” the political situation remains volatile.