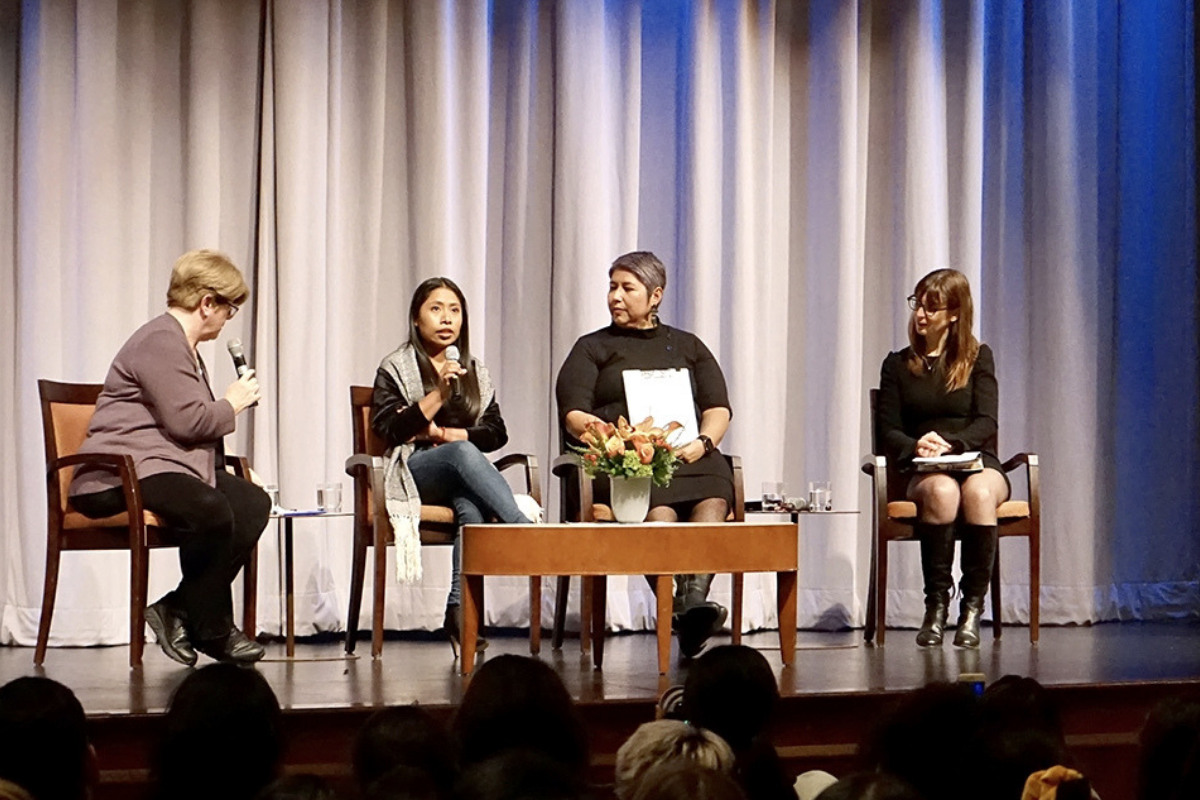 WELLESLEY, Mass. — On November 12, in a packed auditorium Wellesley College’s Newhouse Center for the Humanities, Oscar-nominated actress and activist Yalitza Aparicio opened up to a room of mostly Latina students about indigenous representation and overcoming criticisms.

Recently appointed as a UNESCO ambassador, Aparicio shared some anecdotes about the filming of Roma and reflections on the role of women in society.

“I know that my position in the film scene has allowed me to communicate with more people and I take advantage of this opportunity to advocate for my community. When I was growing up, I never saw someone like me on the covers of magazines or TV,” Aparicio said. “I realized that this was exactly what the community was missing—visibility. My work goes towards filling this void. For a little girl, teenager, or woman to be able to look at the TV or magazines and see someone who looks like her, so she could say that she belonged there.”

Moderated by two professors and with the collaboration of a translator, Aparicio opened the event by speaking about her role as Cleo in Alfonso Cuarón’s Oscar-winning film. She mentioned that besides the greater film reception, for her the most rewarding thing was to see so many women and girls approaching her and expressing gratitude towards her, as they felt that they could now also occupy protagonist roles on the screen. They also felt they had a chance to appear in the media that was historically exclusive of women of color.

“I hope that more indigenous women could have more representation and occupy more protagonist roles. I hope we will continue to break barriers and stereotypes,” she said.

The 26-year-old activist was appointed a UNESCO Goodwill ambassador in October. In a press release shared at the time of the appointment, UNESCO said, “Ms. Aparicio will contribute to UNESCO’s work to ensure the integration of indigenous peoples everywhere and the realization of their rights, through the safeguard and celebration of indigenous cultural heritage, the inclusion of indigenous knowledge in environmental management, the preservation of biodiversity, adaptation to climate change, and equal access to education for indigenous peoples.”

Following a discussion with Wellesley College professors Irene Mata and Codruţa Morari, Roma star @yalitzaapariciomtz took a group selfie with audience members last night. During her interview, Aparicio spoke about her role as not only an actress, but as an activist. She said, “as a successful woman, you must help the women behind you take the same path you did.” A round of snaps followed her statement. @the_newhouse_center #roma 📷: Anto Chávez Alfonso ’20

During the event, Aparicio was asked about this appointment. She shared that when she first learned about it, she wondered why she had been chosen.

“I had not done anything,” she recalled, but once the organization explained their decision based on the impact of her representation, she accepted the appointment, seeing it as an opportunity to pursue her activism and to give more visibility to the communities she represented.

Aparicio explained that part of her role, besides working towards preserving indigenous languages, was to create ways to promote gender equality—a topic that has always resonated with her, as she had come from a place where she was told that women were not equal to men, or able to pursue things like education. Now through her activism, she wants to show girls and other women, especially from Latin America, that they can also pursue their dreams.

“We have a purpose, and it is not only about having children,” she said.

“It’s amazing to see how many women and people from underrepresented communities that have a dream of getting ahead and end up becoming who they want to become. Keep doing what you’re doing, but make sure you turn around and help those who have fallen behind. This is the way we will all advance together and make the future better,” she added.

There was also room for questions from the audience. One of the questions came from a Latina student of Oaxacan origin who asked how Aparicio managed criticism. The actress has faced racist backlash in her career, including a scandal earlier this year where a group of Mexican actresses allegedly tried to prevent her from being nominated for a prestigious Mexican film award.

“If you want respect, be respectful,” Aparicio responded, citing her mother’s advice. “I think her advice helped me a lot. Every offensive comment that has or will come my way will not let me throw in the towel, but, on the contrary, it will only make me more secure and more confident in my place here at this moment. The secret is to not be ashamed of who you are, but on the contrary, be more grateful and more proud of who you are and what you have accomplished even in the face of a very offensive critic.”

Another Latina student asked Aparicio about how to preserve her roots, particularly while living in the U.S.

Aparicio shared that at one point in her life, she was pretty upset with her parents for not having taught her their indigenous language. Her parents were aware of her disappointment but she later understood that although her parents felt pride in who they were, society did not allow them to fully realize their identity, so they decided not to teach their daughter their language—which she now says is the very thing that sparked her activism.

“Despite not being able to speak my ancestors’ languages, I carry and embrace my culture with pride. I am proud of being an indigenous woman despite the great discrimination I have to face. For those of us who are away from home, or living in a different culture, we have to maintain our self-respect and must never be ashamed of who we are and we must never lower our eyes,” she said.

Before wrapping up the dialogue, Aparicio expressed her gratitude to all the women that were present there on the day.

“All of us women had gathered to show the world that we are capable of doing whatever we set our minds to and in doing so we reflect on how society and the materialistic world we live in today sometimes only reflects what we are on the outside, so we must acknowledge our essence,” Aparicio said, before giving her closing remarks which were met with loud applause from the attendees.

“Society makes us believe that the way we speak, or the way we dress is an indication of intelligence, which is not true. If somebody criticizes you and calls you ignorant because you don’t speak the dominant language or you’re not well adjusted to the dominant culture in which you’re living, you have to ask yourself, who is the ignorant person here?” Aparicio said. “Because you speak more languages than that person, and you have the strength and the survival skills that put you here today. You have to acknowledge that you have amazing talent and you are unique. Do not let anyone tell you otherwise.”