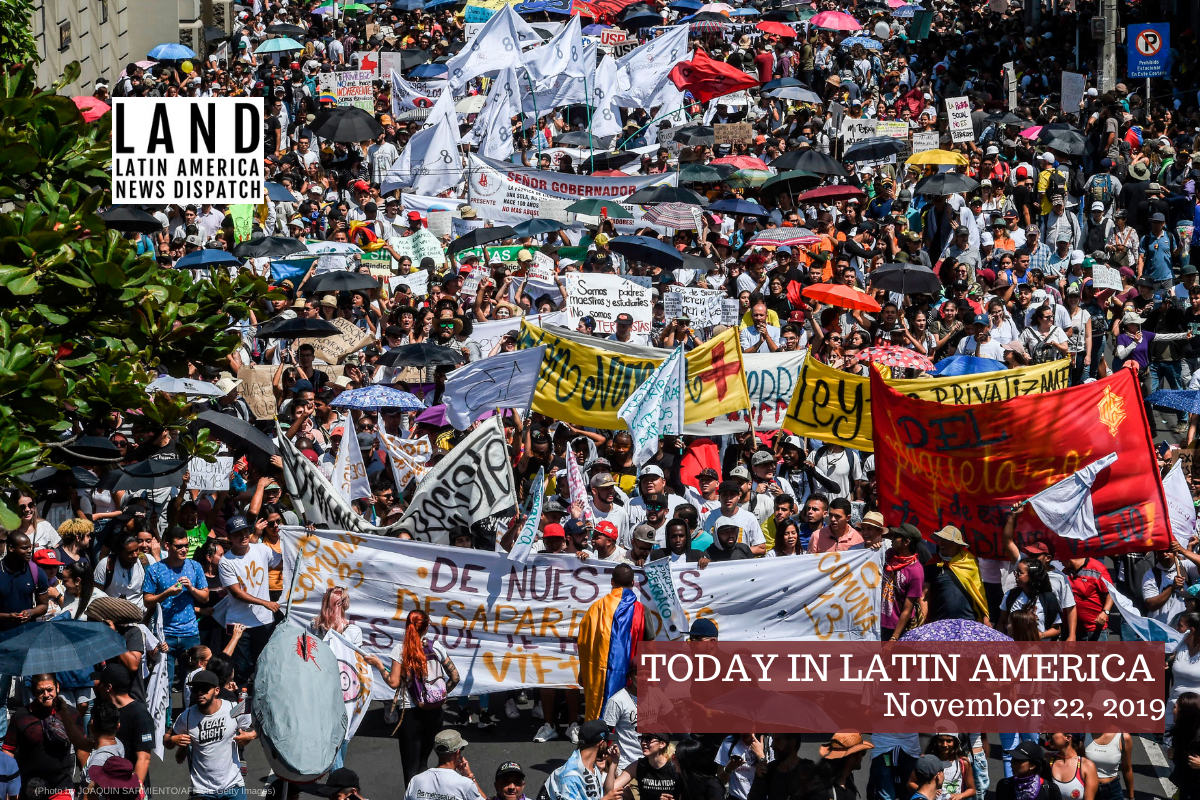 People march during a nationwide strike called by students, unions and indigenous groups to protest against the government of Colombia's President Ivan Duque in Medellin, Colombia, on November 21, 2019. (Photo by Joaquin Sarmiento/AFP via Getty Images)

COLOMBIA: On Thursday, massive protests against Iván Duque’s government took to the streets from La Guajira desert, down to Popayán, in the heart of the Andean mountain range of the country, according to El Espectador. While demonstrators didn’t have a unified request for Duque’s cabinet, they all marched against what they considered a disastrous first year in office.

In Bogotá, the elected mayor, Claudia López, marched alongside other important political figures, such as the former minister of Health Alejandro Gaviria. In that city, reports of police violence against protesters flooded social media and several media outlets, like El Tiempo, reported incidents. Around 3 p.m., the police ordered the evacuation of Bolívar’s Plaza in Bogotá due to alleged attempts by unidentified individuals to loot nearby shops and government buildings, reported El Espectador. In Cali, southeast of the country, the mayor declared a curfew from 7 p.m. until this morning. In other cities, no major clashes were recorded.

BRAZIL: Brazilian authorities accused former president of Paraguay Horacio Cartes of giving $500,000 to a criminal organization and helping former fugitive Darío Messer to evade authorities. According to O’Globo, Brazilian authorities issued an international arrest warrant against Cartes on Tuesday and will seek his extradition. Messer, who was captured earlier this year, allegedly led a group of money changers who participated in bribes in the midst of the Lava Jato corruption scandal. Cartes’s lawyers rejected the warrant issued to the former president and denied any involvement of the politician with the scandal, reported the newspaper Hoy.

CHILE: Amnesty International declared that the country’s security forces —the army and police forces known as carabineros— violated the rights to peaceful protest and freedom of expression of protesters against the government. In a report presented to the president Sebastián Piñera, the NGO stated that the police forces used “unnecessary and excessive force” against the protesters, with the explicit intention of injuring them. Chile’s National Institute of Human Rights has previously confirmed that at least 26 people have been killed in the protests, and more than 2,300 injured.

BOLIVIA: Interim president Jeanine Áñez asked Congress to approve new elections due to the increasing violence in the country, which has left 32 dead and hundreds injured, reported the BBC. Áñez said that she wanted to “unify the country,” but she didn’t set a date for the new poll. Bolivia has become a battlefield after the re-election and later resignation of Evo Morales for his fourth presidential term. Following the announcement, Morales, who is now exiled in Mexico, said in an interview that he would give up his right to be elected in a future electoral process.

HAITI: A meeting between U.S. Ambassador Kelly Craft and President Jovenel Moïse this week prompted Haitians to decry the presence of the United States in Haiti amid anti-government protests. Videos of protesters calling Craft’s visit a form of “U.S. meddling” have been circulating on social media and on WhatsApp, while other Haitians responded to Craft directly on Twitter, calling her meeting “hypocritical.”

During my meeting today with @moisejovenel, #Haiti’s democratically elected president, he made clear his commitment to addressing Haiti’s urgent needs, promoting economic prosperity, and building a better future for all Haitians. pic.twitter.com/QnpMND1TKi

In an official statement released on Wednesday, Craft said that her meeting “reinforced the urgent need to support Haiti’s state institutions.” “President Moïse and other democratically elected leaders have an obligation to come together, put aside differences and find an inclusive solution for the benefit of the people of Haiti,” said Craft.

DOMINICAN REPUBLIC: The president of the Supreme Court denounced the treatment of gender-based violence victims in the court system yesterday, and promised to commit “all the attention” of the federal courts to the problem in the new session, Listin Diario reported. Speaking to new federal lawyers on Thursday, Luis Henry Molina announced a new set of policies for victims, including sensitivity training for court employees. There have been more than 60 femicides in the Dominican Republic this year, which Molina described as a “hemorrhage” of violence.

GUATEMALA: The United States deported its first asylum seeker, a Honduran man, to Guatemala yesterday under the new “safe third country” agreement between the two governments. The policy was signed in July and mandates asylum seekers who passed through Guatemala to seek asylum there first. Migrants who fail to seek asylum in the Central American country are ineligible for asylum in the United States. The asylum seeker reached the U.S. border in El Paso, Texas, this week but was immediately transported to Guatemala. Interior Minister Enrique Degenhart said more flights with asylum seekers would arrive in Guatemala next week. The migrants will be under the care of United Nations immigration and asylum agencies, according to Degenhart.

PANAMA: According to a UNICEF report released yesterday on the status of Panama’s youth, the country is failing to make progress on the protection of children and adolescents. UNICEF representative to Panama Kyungsun Kim said the country has failed to reduce infant mortality in the last 10 years, alarming the organization. “It’s time to ask what each (of us) is going to do to improve the situation,” said Kim. Other areas of concern include the lack of clean water in schools, high rates of teen pregnancy and an increase in domestic and sexual violence against children. Sara Rodríguez, the director of the National Secretariat of Children, Adolescents and Family, said the report was “a challenging scenario” to receive.

UNITED STATES: A former Border Patrol agent, who hit a fleeing Guatemalan migrant with his truck in 2017, was sentenced on Wednesday to three years of probation. The agent, Matthew Bowen, pleaded guilty in August to deprivation of rights under color of law, a misdemeanor. Bowen, who more than two weeks before the encounter, referred to immigrants in text messages as “subhuman,“ had faced up to one year in prison and a $100,000 fine but Judge Thomas Ferraro imposed a sentence of 36 months of probation and 150 hours of community service.

MEXICO: Mexico’s murder rate increased by 2 percent in the first 10 months of 2019 compared to 2018. Federal officials said there have been 29,414 homicides so far in 2019, compared to 28,869 in the same period of 2018. President Andrés Manuel López Obrador has promised to decrease the homicide rate, which earlier in the year had been growing by double-digit percentages.

UNITED STATES: Three refugee resettlement agencies filed lawsuits to block President Donald Trump’s executive order that would allow cities and states to block refugees from being resettled there. The agencies claim Trump’s order will harm the 40-year-old program that has seen an 80% decrease in the number of refugees allowed to settle in the U.S. under the Trump administration. Resettlement agencies were already closing many programs and laying off employees because of the drop in federal funding, which is tied to the number of refugees resettled in the country. The agencies said that Trump’s policy will lead to disruptions, disputes and delays of resettling refugees.