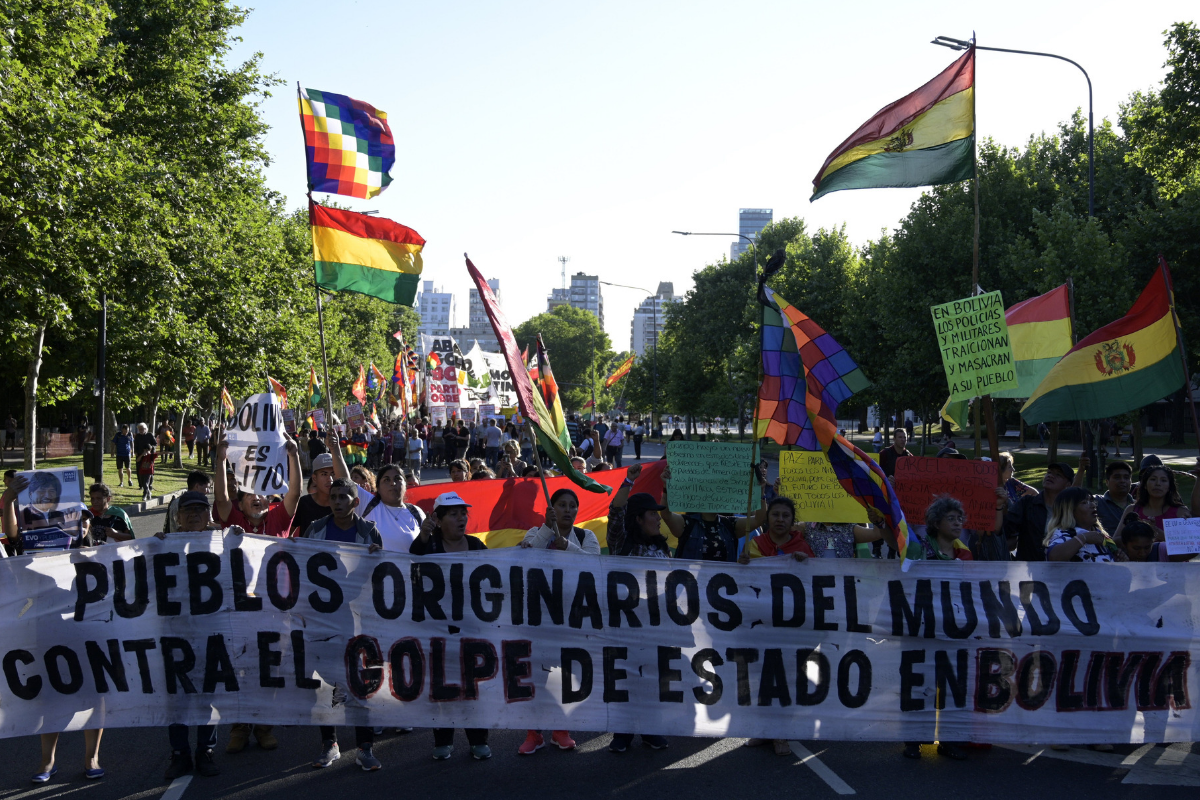 People take part in a demonstration in support of Bolivia's overthrown president Evo Morales in front of the US embassy in Buenos Aires on November 22, 2019. (Photo by Juan Mabromata/AFP/Getty Images)

Just over a decade ago in late January 2009, I was standing in front of the Palacio Quemado, the government headquarters in the heart of the Bolivian administrative capital La Paz, amid a crowd of euphoric Bolivians. A quilt of national tricolour flags and multicolour wiphalas, the traditional Andean flags, was waiting for President Evo Morales to appear and celebrate the overwhelming results of a referendum that had just ratified a new constitution.

That was perhaps the last epic moment of the “plurinational revolution” that began with Morales’s election in 2005 and the installation of the first Bolivian government led by a popular coalition of peasant and indigenous movements.

Today, the epic tale of Bolivia’s first Indian president has reached a tragic end. Morales and most of his close political entourage resigned on November 10 and left the country after mass protests and pressure from the military precipitated a political crisis triggered by the disputed results of October’s presidential elections.

Since Morales’s departure, confrontations between his supporters and armed forces have left at least 32 people dead and hundreds wounded. The UN warned in late November that the unrest could “spin out of control”.

The political crisis has sparked a deep polarization between those condemning an “illegitimate coup” and those celebrating the “return of democracy” in Bolivia. This polarization has grown out of the complexity of Morales’s legacy, his government’s unprecedented achievements and its inability to overcome authoritarian tendencies.

This dramatic outcome for a government that still showed rates of support of over 40 percent after 14 years in office was hardly predictable, even for its political opponents. The longstanding political loyalty of many Bolivians to Morales is partly due to the fact that he represented traditionally excluded sectors of society, mainly peasant and, at least initially, indigenous peoples.

He also cultivated pragmatic relationships with economic elites and the armed forces. At the same time, cautious management of the economy, particularly of the revenues from natural resource exports, supported significant efforts to redistribute the country’s wealth. During Morales’s time in office, the number of people in extreme poverty fell from 38 percent to 18 percent of the population. Bolivia also transitioned to become a middle-income country.

Alongside other countries of the so-called Pink Tide—the wave of leftist governments elected across Latin America in the first decade of the new millennium – Morales’s Bolivia embraced a commitment to championing socio-economic rights, as well as newer rights, such as cultural and environmental rights. Some key examples were the creation of indigenous autonomous territories, as well as the historic 2010 Law of Mother Earth, which guaranteed the rights of nature.

The alleged electoral fraud in October was the tipping point that led to Morales’s ousting. However, it followed a series of violations, manipulations and peculiar interpretations of fundamental democratic principles by the government.

At the same time, little had been done to strengthen Bolivia’s institutions. As my colleague Jean Grugel and I have argued, in Bolivia, as in other like-minded countries in the region, the strengthening of socio-economic, cultural and environmental rights came at the expense of other rights, namely political rights and civil liberties. According to data from CIRI Human Rights Dataset and Freedom House, Bolivia is significantly below the Latin American average in its respect for association and organization rights, freedom of expression and belief, rule of law and personal autonomy and individual rights.

One of the root causes of this problem was the concentration of power in the hands of a strong and close executive, with a strict control over the state apparatus and authoritarian ways of managing dissent. Few incentives existed for co-operation with the opposition, or for a collegial approach to power that would favour leadership transitions. In the classic Latin American tradition of strongman leadership, Morales tried to perpetuate his power by circumventing democratic institutions and the will of the majority.

He ignored the results of the 2016 referendum in which Bolivians voted no to his re-election and, with the support of a Constitutional Tribunal, changed the constitution to allow his candidacy for a fourth mandate.

Morales’s government was also incapable of including the urban middle classes in its reform process. It was the middle classes who strongly reacted to his abuses of power and eventually took to the streets of major Bolivian cities demanding his resignation.

Morales certainly holds political responsibility for the conditions underlying the current crisis. But rather than focusing on his administration’s culpability, it’s now urgent to address the question of how to safeguard the process of social and economic inclusion that he started. Over the past few decades, Bolivia has transformed in a way that many considered irreversible – but perhaps it was premature to assume that.

In recent weeks there has been a resprouting of racism and intolerance in Bolivia and the rise of a new ultra-right opposition with fundamentalist religious narratives. These should be warning signs for a country, and a region, where revolutions and counter-revolutions are all too common avenues of political expression.