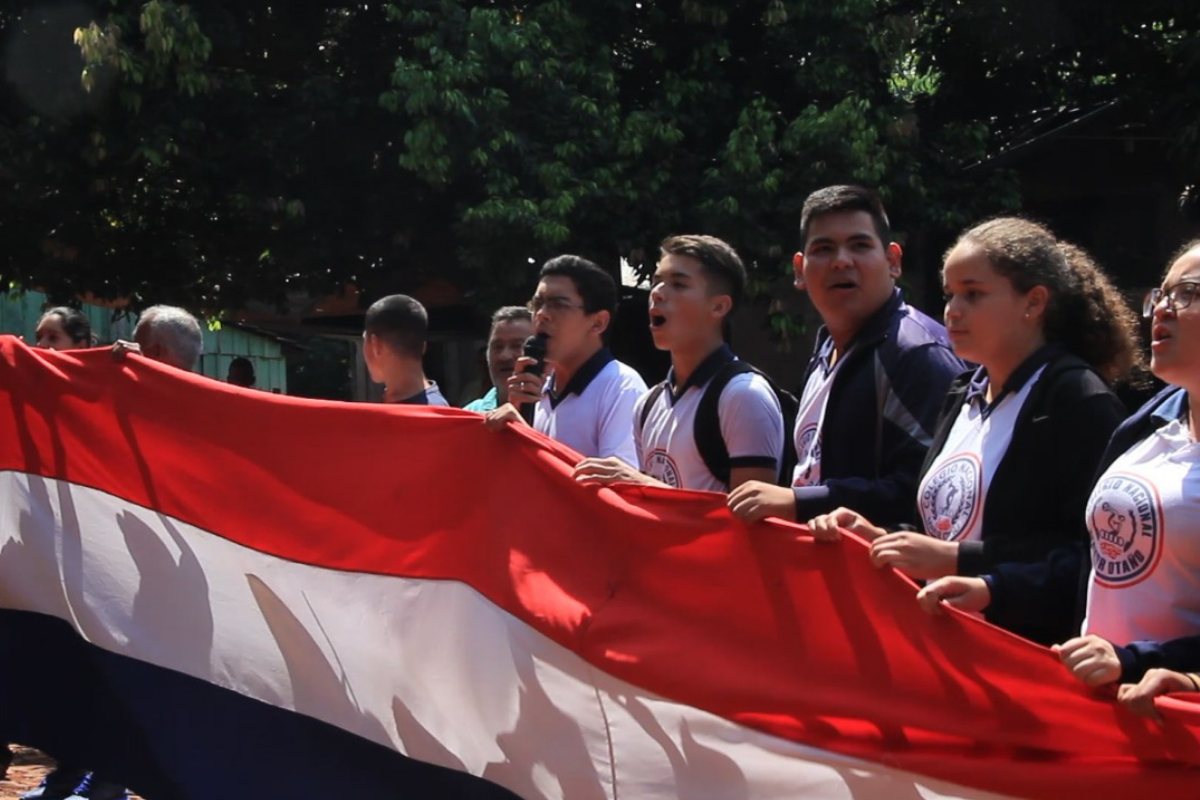 ASUNCIÓN, Paraguay — In recent weeks, the town of Mayor Otaño in southeastern Paraguay has been the scene of a dramatic protest over alleged misuse of public funds by local authorities. And high school students, with 17-year-old activist Nelson Maciel at the helm, have been leading this protests—just one in a series of local movements against perceived corruption erupting in Paraguayan towns and cities.

Maciel, already a seasoned campaigner with numerous national and international youth organizations, said that he and other members of the student union at Mayor Otaño’s public school became deeply concerned about the town hall’s finances after hearing municipal councilors mention irregular spending practices on a local radio show in August.

“Hearing that woke us up,” Maciel said at a restaurant in central Asunción, the capital of Paraguay, shortly after a meeting with the Attorney General to discuss events in his hometown. “We decided to ask those same councilors for documents from the town hall so that we could take action regarding the situation. They gave us enormous amounts of papers. It took us around a month to study them and draw our conclusions.”

He said that their analysis uncovered what they believe is proof of massive inconsistencies in public spending. For example, they claim that large contracts for road maintenance were given to a business owned by Mayor Pedro Chávez’s brother, who went on to invoice the municipality for nonexistent costs.

Another large point of suspicion was apparent misuse of funds from the National Fund for Public Investment and Development (FONACIDE). FONACIDE is a large public pot originating from the sale of electricity from the Itaipú Dam to Brazil. Municipal governments receive a portion of this money and are required to spend 80 percent of it on projects related to education.

“The money reserved for education was used to build a bridge—a bridge leading to the mayor’s farm,” Maciel said. “The rules of FONACIDE say that all infrastructure projects must be within two kilometers of a public school. In this case, the nearest school was 10.5 kilometers away.”

In September, they decided to act on their discoveries, positioning the misuse of FONACIDE money as the central point of their campaign. They began protesting outside Mayor Otaño’s town hall, demanding that authorities make their spending accounts publicly available. They also called for the mayor’s resignation and asked the town council to request an audit from the National Comptroller General’s Office. These demands have not yet been met.

Since taking action, the students have faced a strong reaction from Chávez and his allies. Tension between critics and supporters of the mayor has manifested in an eruption of physical violence. Maciel himself suffered a head injury during a scuffle involving a police officer outside the town hall.

The young activist also said that he has received death threats and must now rely on private vehicles and drivers to guarantee his safety. His mother was told by the president of the local association of the Colorado Party —Chávez’s political party— that she would lose her job as a cleaner at the Mayor Otaño’s public health center if she did not intervene in her son’s activism. Maciel has not slowed down, and she was subsequently fired. The Ministry of Health offered her a new position only after an intervention from Paraguayan president Mario Abdo Benítez.

In addition, Chávez and other local figures from the Colorado Party, have brought a total of four libel actions against Maciel for his role as leader of the protest.

Walter Isasi, a lawyer for the Paraguayan Human Rights Coordination Group (CODEHUPY), said, “These legal suits are really just a form of intimidation being used to block Nelson’s right to demand transparency. Free access to public information is a universal human right.”

Isasi claimed that the tactic of criminalizing activists has been used in other cases against young people who have taken a stand against authority in Paraguay. In August, a long battle saw student activist Ernesto Ojeda absolved of charges brought against him for participating in a protest that pushed for improvements in the education system in the city of Fernando de la Mora in 2017. He said the government has not moved to defend Maciel from the danger surrounding him.

“I don’t have knowledge of actions taken by the state in response to the violence that Nelson has experienced,” Isasi said. “Only the Ministry for Childhood and Adolescence has taken a stand.”

The Ministry for Childhood and Adolescence published a press release in the aftermath of the protest in which Maciel received a head injury. The state institution denounced the use of “intimidation” to block the youth leader’s expression of his rights.

Despite this adversity, protesters have pushed on. The National Comptroller General’s Office did carry out an audit —without the approval of the town council, according to Maciel— and found that there had been a possible misuse of 1 billion guaranies (USD 154,466) of public funds. The report, which was submitted to the public prosecutor’s office, includes a list of 15 serious signs of embezzlement within the municipality. Mayor Chávez denies wrongdoing.

The protest in Mayor Otaño is by no means unique. Other towns and cities across Paraguay have been witnessing upheavals in response to perceived wrongdoing by local authorities.

Citizens egged the mayor of Arroyito and complained about “ghost projects”—initiatives that were paid for but that only appear on paper. In early November, councilors in the city of Lambaré requested an intervention in the administration of Mayor Armando Gómez due to multiple financial irregularities that left the municipality with no funds to pay its employees.

The Paraguayan news media also frequently publish articles on municipalities’ mass failings to properly administer funds. For example, it was reported this year that over 97 percent of municipalities did not acceptably justify their FONACIDE spending.

Mariela Centurión, director of the independent Center for Investigation and Studies of Public Administration and Governability (CIAG), said these figures should not lead people to jump to generalized conclusions about the honesty of Paraguay’s municipal administrators. She said that while corruption is undoubtedly a large and important factor that must be addressed in places like Mayor Otaño, other elements are at play in hindering the effective administration of municipal budgets.

“The message that these articles put across, which I think is extremely severe, is that municipalities are incapable of managing their own resources and fulfilling their functions,” she said.

Centurión points to figures from FONACIDE that, if accurate, indicate that the misuse of funds is nowhere near as endemic as is often implied. Over the period of 2013 to June 2019, municipal governments received USD $365.5 million from FONACIDE. Of this total, just 0.69 percent was  employed illegally, according to FONACIDE. Centurión said that the worrying figures reported in the press can be attributed to other factors besides corruption, such as widespread administrative errors.

Paraguayan municipalities have largely been victims of a poorly executed plan to decentralize power that began with the new constitution of 1992, Centurión added.

“There’s a contradiction. On the one hand, the constitution mentions a mandate of decentralization, but there are no laws, no regulations nor resources to drive the process of strengthening municipal governments,” she said. “There is no training for municipal employees. Work from the executive branch to fulfill its responsibility of working with municipal staff to modernize municipal management is entirely absent.”

This lack of support leads to poor performance in local governments, including the frequently botched reporting of spending. The executive branch, she said, has set municipal governments up as its scapegoat.

Centurión expressed worry that the portrayal of municipal governments as innately corrupt institutions threatens their ability to work with local communities. She said that municipalities are unrivaled in their capacity to identify the needs of residents: if their responsibilities are taken away from them as a result of this perception of ineptitude, this great benefit will be lost.

The very low participation of citizens in the day-to-day running and decision-making processes of local government is another concerning factor, according to Centurión. She claimed that beyond participating in elections, there is  limited interest in using the mechanisms available to allow locals to form part of the workings of their institutions and regulate public spending to deter corruption.

“I think that in Paraguay, we haven’t been able to develop the ability to hold a dialogue and debate,” she said.

Centurión said that this lack of regular involvement can lead to lowered trust in institutions and, in cases where corruption is present, a vital filter is lost. This disconnect can lead to a buildup of tension, with consequent explosive reactions from citizens. She said that the multiple protests of recent weeks should be a wake-up call to the Paraguayan government: citizen participation must be encouraged at all levels of local government in order to empower residents to regulate and shape municipalities’ activities and spending.

According to Nelson Maciel, the low participation of the population of Mayor Otaño in vetting the running of its town hall has allowed for all types of wrongdoing over the years. The current protests, he said, are the first step in changing this.

“Mayor Otaño is a submissive town in which people don’t challenge the status quo,” Maciel said. “There has never been a citizen protest in response to the actions of a politician. People have been put to sleep by so much fear and injustice. Now, we, the young people, are working with the community. It’s only a question of igniting the flame so that they can go out onto the streets to demand what is theirs.”