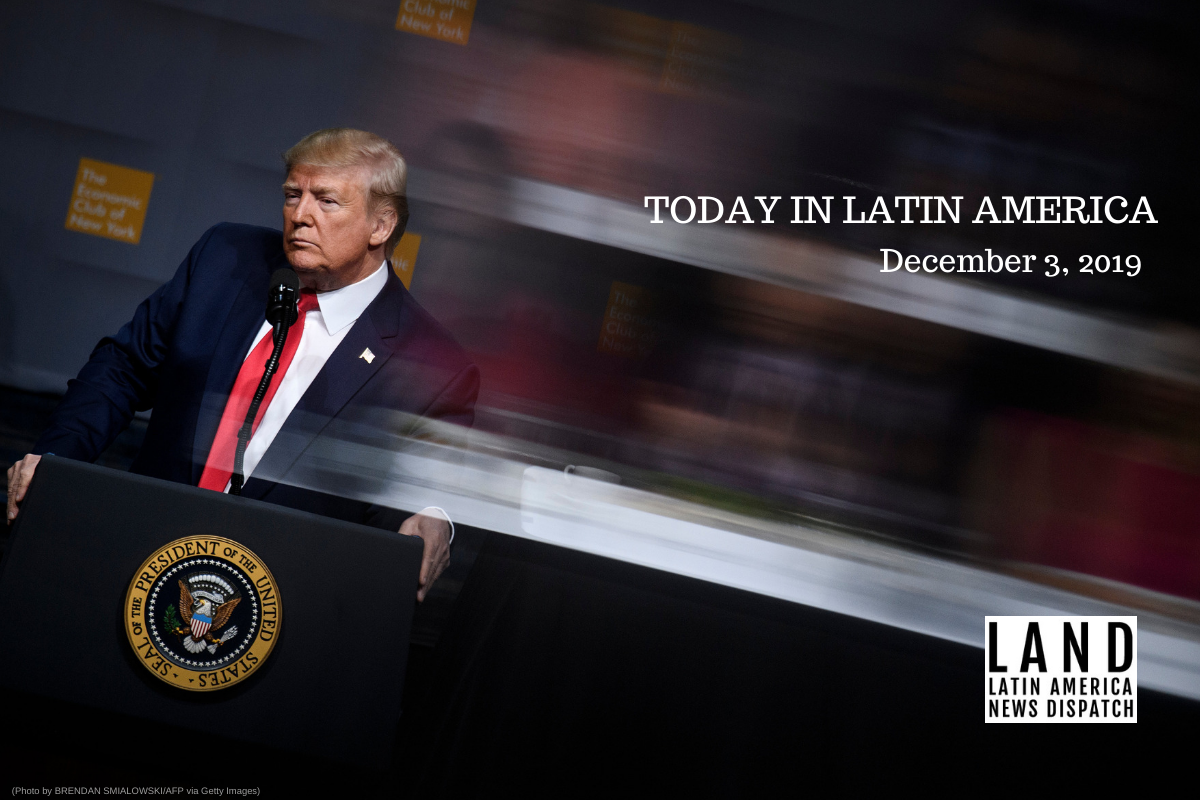 REGIONAL: U.S. President Donald Trump announced yesterday that his administration will impose tariffs on steel and aluminum from Brazil and Argentina. Trump tweeted that “Brazil and Argentina have been presiding over a massive devaluation of their currencies,” before stating, “I will restore the Tariffs on all Steel & Aluminum that is shipped into the U.S. from those countries.”

Brazil and Argentina have been presiding over a massive devaluation of their currencies. which is not good for our farmers. Therefore, effective immediately, I will restore the Tariffs on all Steel & Aluminum that is shipped into the U.S. from those countries. The Federal….

It remains unclear what prompted Trump to reverse the agreements that had been set; Brazil and Argentina were exempted from steel and aluminum tariffs in March 2018. The move would expand a global trade war which appeared to be ending.

In Brazil, President Jair Bolsonaro faced backlash from Trump’s announcement. Bolsonaro has maintained a friendship with Trump and special alliance with the United States. Insper University professor Carlos Melo told the Associated Press, “Brazil’s president thought he had a big brother. Now he realizes he does not.”

CHILE: The Chilean Central Bank reported yesterday that the country’s GDP contracted by 3.4 percent in October, and analysts expect that November figures will be worse. Economy Minister Lucas Palacio tweeted that the numbers “reflect the social impact of violence in our country.” Chileans began protesting a subway fare increase in mid-October, and many stores closed for weeks at the peak of the demonstrations.

ARGENTINA: Vice President-elect Cristina Fernández de Kirchner appeared in court yesterday to defend herself against corruption charges that allegedly took place during her time in office. Fernández, who will become vice president on Dec. 10, is charged with leading a criminal association that illegally granted public works projects in the southern province of Santa Cruz  during her presidency. During yesterday’s hearing, Fernández shouted at times, denying the accusations and denouncing them as political persecution. “History has absolved me, and history is going to absolve me,” she told the judges at the hearing. The former president faces four other legal proceedings for alleged crimes.

COLOMBIA: Yesterday, President Iván Duque’s government offered to begin separate talks on the demands of the student groups that have organized recent protests in Colombia. Administrative Director Diego Molano announced that the government would be willing to negotiate on 13 points identified by the National Strike Committee, including preventing changes to tax, labor and pension laws. Molano asked the committee to refrain from leading a protest scheduled for tomorrow, but committee members said they plan to carry out the demonstration. Molano did not clarify if the government would still hold talks with the committee if it proceeds with the strike.

HAITI: After months of violent unrest, thousands of Haitian children returned to school yesterday protected by police patrols. Schools, private businesses and government offices stopped their activities during the months of protests against President Jovenel Moïse as a way to pressure him to leave office. The protests, which involved roadblocks, clashes with police and the ransacking of local businesses, made it difficult and dangerous for children to travel to school. With Moïse refusing to leave office, the Education Ministry called for the reopening of public and private schools last week. However, attendance levels remain low and in some neighborhoods of Port-au-Prince administrators declined the government’s call for classes to resume.

PUERTO RICO: A team of U.S-based scientists is working to document Indigenous sites along Puerto Rico’s coast before rising sea levels destroy that heritage. The sites date back a thousand years, but scientists fear that climate change may wash them away before they can be recorded. The scientists plan to use 3D images to identify the island’s most vulnerable sites and begin documenting those areas. Scientists have discovered large settlements and ceremonial centers used by the Taíno people dating back nearly 2,000 years scattered across the island.

TRINIDAD AND TOBAGO: Former Prime Minister Kam­la Per­sad-Bisses­sar announced yesterday that her party’s lawyers are investigating possible irregularities at polling stations across the country. Her party, the United National Congress (UNC), is now working in several municipalities to find out more about the inconsistencies. Persad-Bissessar stated that several polling agents were approached by representatives of other political parties and were offered “inducements to stand down.” UNC Public Relations Officer Anita Haynes said that a senior official from another party offered $200 bribes to the people of Embaccadere, San Fernando, for their votes.

U.S.-MEXICO BORDER: CNN has obtained letters written by migrants living in Mexican border towns as they wait on asylum pleas in the United States. The letters recount a consistent threat of violence, sexual assault and kidnapping from cartels, which are known to target newly arrived Central American migrants. Migrant rights advocate Denise LaRock coordinated sharing the letters with CNN in hopes that these firsthand accounts will bring attention to the dangerous conditions facing migrants outside the United States. Nearly 60,000 migrants have returned to Mexico since the “Remain in Mexico” policy was implemented for migrants filing asylum claims.

MEXICO: Mexican authorities made “several arrests” yesterday, following the November murders of nine U.S. citizens in the state of Sonora. The Mexican Army, Navy, National Guard and intelligence officials collaborated to make the arrests. The country’s attorney general’s office did not provide a number or the names of people arrested. Mexican authorities have been under immense international pressure to make arrests after the murders involving a Mormon family.