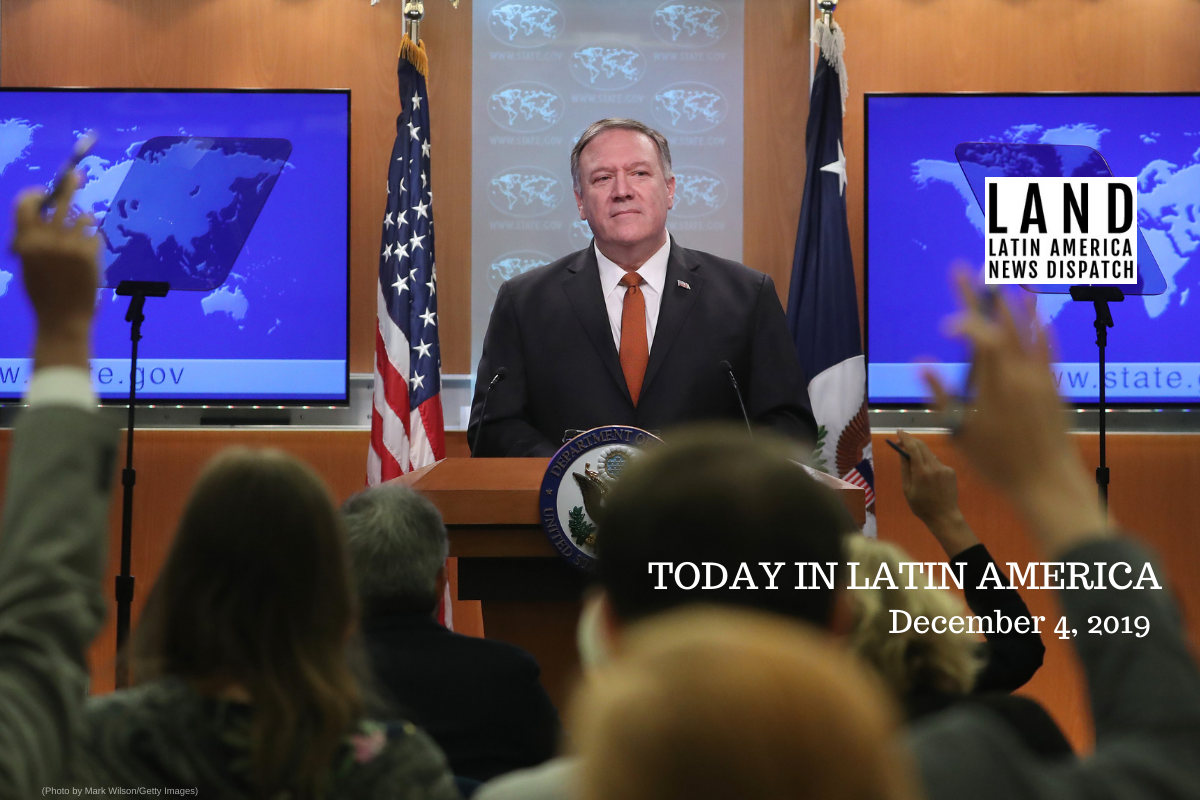 U.S. Secretary of State Mike Pompeo speaks to the media in the briefing room at the State Department, on November 26, 2019 in Washington, DC. (Photo by Mark Wilson/Getty Images)

Pompeo’s statement comes amid months of demonstrations across Latin America. The United States’ relationships with Cuba and Venezuela have grown increasingly tense since President Donald Trump took office. The Trump administration walked back Obama-era negotiations with Cuba and recognized Venezuelan opposition leader Juan Guaidó. Based on historical U.S. intervention on the continent, some Latin American activists have raised concerns that the U.S. may support military coups.

CHILE: The U.S. Geological Survey reported yesterday that a 6.0-magnitude earthquake struck Chile off the north coast of Arica. The earthquake hit during the early morning 20 miles under the Pacific. No damage or deaths were reported.

BRAZIL: Brazil’s regulatory body for public health approved guidelines for the sale of medicinal cannabis products yesterday. The organization outlined how it planned to also regulate prescriptions and oversight. Brazil has also undertaken steps to decriminalize private possession of marijuana.

VENEZUELA: Signatories of the 1947 Rio Treaty, a Cold War-era self defense pact, agreed to pursue further sanctions on officials and allies of the government of Venezuelan President Nicolás Maduro yesterday. Over a dozen countries committed themselves to sanctioning and restricting the travel of Maduro’s allies in a meeting in Bogotá. They stand accused of drug-trafficking, corruption, human rights violations and money laundering. But South American leaders ruled out the use of force to expel Maduro.

COLOMBIA: Mass marches are expected to continue in Chile today, after the first day of negotiations with President Iván Duque yesterday reached no agreement to end protests. Thousands of Colombians have been protesting since Nov. 21. Until yesterday, Duque refused to negotiate with social leader and address their list of 13 grievances. The government plans to meet again with protesters tomorrow. Organizers asked the government to not use riot police during the organized march, but the request was denied.

DOMINICA: Protesters calling for the cancellation of this Friday’s parliamentary elections blocked roads to Dominica’s main airport yesterday, forcing passengers to walk more than a mile to get to their flights. The protesters claim the elections unfairly favor current Prime Minister Roosevelt Skerrit and his administration, who they say have failed to carry out necessary election reforms recommended by the Organization of American States earlier this year. Protesters have been demonstrating for weeks, clashing with police who have fired tear gas and bullets at them.

SURINAME: Suriname President Dési Bouterse insisted that he’s innocent after being sentenced to 20 years in prison on Friday for ordering the killing of 15 political opponents in 1982 after a coup. Bouterse was in China when the court sentenced him, and opposition leaders called for his resignation upon his return. He arrived back in Suriname Sunday, however, and maintained his innocence, saying the charge is part of a “political game.” Bouterse has two weeks to challenge the decision. He still plans to run for re-election in May.

HONDURAS: Seven men were sentenced to 30 to 50 years in prison on Monday for the murder of Berta Cáceres in 2016. Last year, a court ruled that executives from the dam company Desa ordered her murder. Four hitmen, two former Desa workers and a U.S.-trained special forces major were sentenced. Cáceres was an Indigenous environmentalist and winner of the Goldman prize for environmental defenders. She was killed after she tried to stop construction of a hydroelectric dam on the Gualcarque River. International financial institutions that had been backing the dam withdrew from the project after Cáceres was killed.

MEXICO: The Coahuila state government raised the death toll from last weekend’s gunfight to 23 people yesterday and announced that 10 suspects had been arrested. A shootout between cartel forces and state police brought chaos to the small city of Villa Union on Saturday. Coahuila state governor Miguel Riquelme said that the majority of detained suspects are minors.