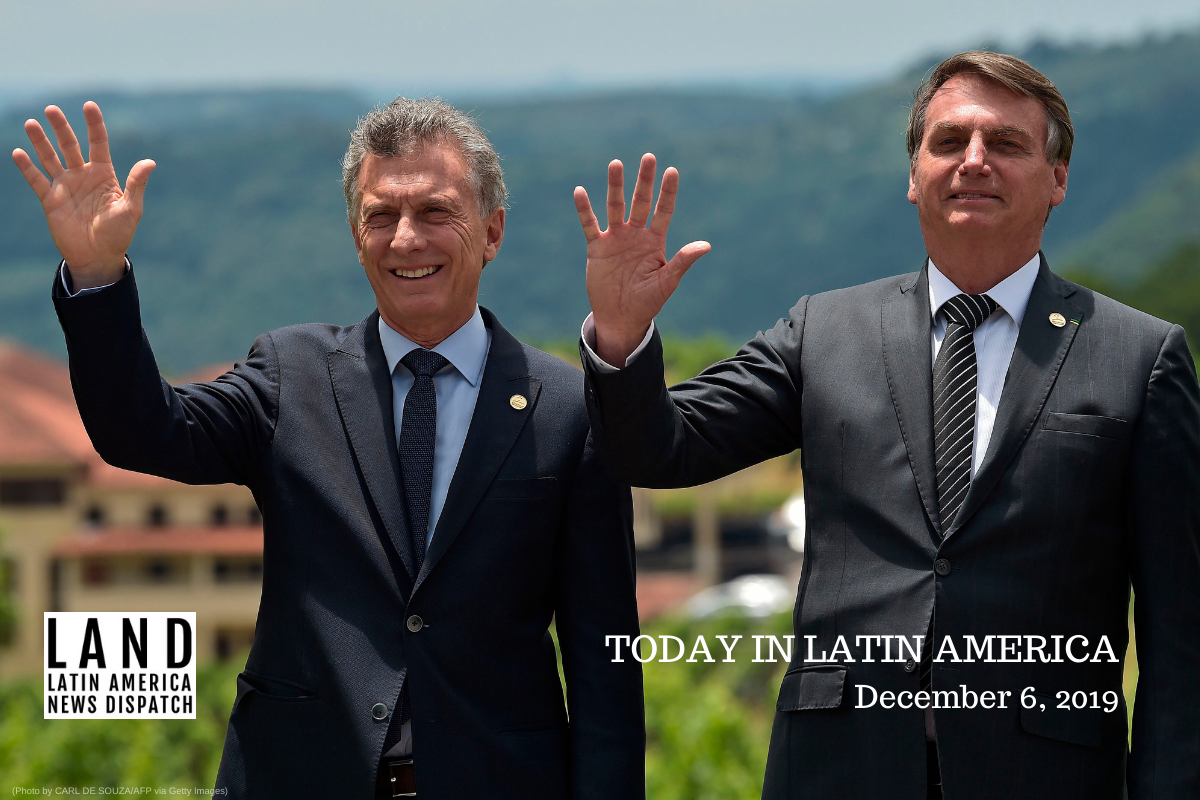 BRAZIL: The continuity of the trading bloc Mercosur is at risk, some of its members expressed at the biannual summit held in the southern Brazilian city of Bento Gonçalves, the AP reported. Lucía Topolansky, president of Uruguay, said that countries couldn’t pretend that “Mercosur is paradise,” referring to the precarious social situation prevailing everywhere in South America. Paraguayan President Mario Abdo asked the six countries to integrate the economic alliance to “win people’s trust back.”

The tensions in the most important trading bloc of the region started when ultra-right President Jair Bolsonaro refused to invite representatives of Argentina’s newly elected president, center-left Alberto Fernández. Bolsonaro, according to El País, hasn’t even addressed Fernández’s victory and according to the AP, probably won’t attend his inauguration. During the meeting, Bolsonaro said if Argentina “causes trouble, Brazil will leave Mercosur,” The Financial Times reported. Fernández, in turn, has said he wishes Mercosur will “build a common market that enables us to confront the challenge of globalization with another force.”

ECUADOR: Chancellor José Valencia complained about the United Nations’ preliminary report addressing human rights violations in the protests that erupted in October, according to El Comercio. In a letter, Valencia said the report “doesn’t stick to facts” and “reflects only the opposition’s views or of those close to the violent ones” during the demonstrations against a new tax for gas. After the riots, the UN interviewed 373 officials, citizens, indigenous leaders and journalists, and the commission concluded that arbitrary arrests, violations of due process and excessive police repression frequently occur during the protests.

BOLIVIA: The prosecutor investigating the alleged electoral fraud of the October 20 elections said that he will include as a “key part” of his inquiry the OEA report in which the international agency confirms that “fraudulent manipulation” took place to re-elect former president Evo Morales, La Razón reported. The report, which was released last Wednesday, said Morales’ triumph was “statistically impossible” and identified at least 20 forms of misconduct, including the redirection of data flow to two hidden servers outside the national electoral entity, the TSE. Ronald Chavéz, the prosecutor in charge, told La Razón that he will interview María Eugenia Choque, former president of the TSE, to find out who was behind the hidden servers from which the data would have been manipulated.

DOMINICA: A High Court judge denied an injunction to postpone today’s election after members of the Concerned Citizens Movement (CCM) filed a request to move the election to February 2020, according to Caribbean360. Justice Bernie Stephenson ruled that the request was outside of the jurisdiction of his court, and that while the group may have “legitimate concerns,” the court cannot “intrude on the elections once the writ has been issued by the President.” The CCM filed the injunction citing election form irregularities and a general lack of fairness in the election process. Protests have continued this week.

CAYMAN ISLANDS: Environmental activists allege that a new project by two major cruise lines —Royal Caribbean and Carnival— is jeopardizing the health of coral reefs and threatening endangered marine species in the area, according to the BBC. The Verdant Isle consortium, a joint venture by the companies, will invest $250 million to build new jetties and docking sites on Grand Cayman. According to scientists and tour guides on the island, the construction will not only harm wildlife, but may also impact the local economy, which relies on privately booked tours and scuba diving excursions. Residents will vote on a referendum addressing the consortium early next year.

NICARAGUA: A member of the European Parliament has called for the Nicaraguan government to release political prisoners and supported protesters calling for fair and free elections. Alicia Homs, a Spanish representative for the Socialist Party of the Balearic Islands, discussed the status of Nicaragua with other EU leaders at a Foreign Affairs Committee meeting and focused on the detention of political dissidents and the rising number of Nicaraguan exiles outside the country. Following the meeting, Homs tweeted that “the only possible solution is to hold free elections, with guarantees for all candidates and with international observation.”

UNITED STATES/MEXICO: United States Attorney General William Barr met with President Andrés Manuel López Obrador behind closed doors and discussed “establishing a common front” against Mexican cartels, according to reporting by the Associated Press. “Among other things, they spoke about cooperating on weapons trafficking, money laundering, international drug trafficking and how to form a common front against international trafficking and crime,” Mexico’s Foreign Relations Department said in a statement. The meeting comes after President Donald Trump suggested that the cartels be classified as terrorist organizations.