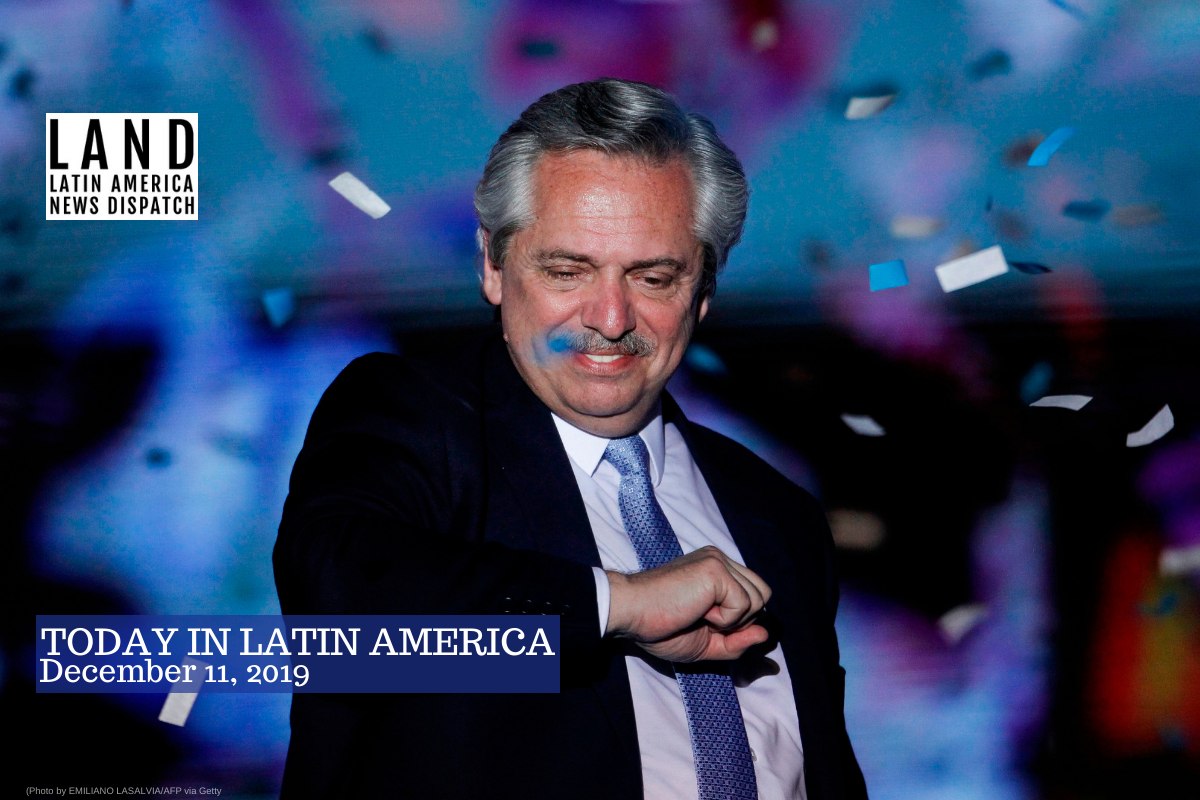 ARGENTINA: Alberto Fernández was inaugurated as Argentina’s new president yesterday. Fernández, a liberal, replaced conservative Mauricio Macri who was the first non-Peronist president to complete his term in 74 years. Fernández pledged more help for the poor. He also said that the country will be unable to pay its debts on schedule. Former president Cristina Fernández will serve as the vice president. Argentina is currently facing an economic crisis with inflation at 55 percent and a 35 percent poverty rate.

CHILE: A Chilean Air Force transport plane carrying 38 people went missing on its voyage to an Antarctic research base yesterday. The plane was believed to have flown over Drake’s Passage, the sea between the South American and Antarctic continents, notorious for severe weather conditions. The plane was carrying 17 crew and 21 passengers to maintenance base equipment. Two ships, over a dozen planes, and three satellites were being used in the search for the aircraft, but after seven hours, the Air Force declared the plane a loss.

COLOMBIA: Guerrilla fighters from the National Liberation Army (ELN) attacked a major highway connecting Colombia’s coast to the interior on Monday evening. The guerrillas burned at least seven vehicles in the municipality of Valdivia. Heavy fighting broke out as the military attempted to regain control of the area. The region has seen a spike in violence in recent weeks. Three miners were killed by an armed group over the weekend. The attacks came in the middle of a national strike that lists restarting negotiations with the ELN as one of its 13 demands.

DOMINICAN REPUBLIC: Starting next Monday, the Dominican Republic will require tourist visas from Venezuelans hoping to enter the country. The move has been largely viewed as a way to bar illegal immigration. According to a Venezuelan civil association, there are around 30,000 people living in Dominican Republic. The association’s leader said 97 percent of those people overstayed their departure date. They arrived as tourists, and are now undocumented. Some Venezuelans use the Dominican Republic as a stopping point before continuing on to other countries, or to buy medical supplies and basic goods. Travellers with American, Canadian, British or EU visas will be exempt, as well as those with diplomatic or official passports.

COSTA RICA: The government of Costa Rica announced yesterday that it will promote a new technical standard that will essentially allow women to have “therapeutic abortions” if the pregnancy represents a health risk. The policy will not legalize abortion. Rather, it will provide doctors the statutory tools to proceed with abortions if a woman’s life is at risk, and it will enable hospital systems to develop policies impacting women and obstetric care. The regulation requires four standards that must be met for an abortion to be performed: the woman’s life must be in danger, the danger is unavoidable, the abortion has to be performed by an authorized obstetrician if there is not a medical professional available, and the woman needs to consent to it.

NICARAGUA: The number of Nicaraguans seeking asylum in Spain has increased 360% this year, according to the UN Refugee Agency. From January to October, 4,944 asylum petitions were registered, more than double the number of petitions in 2017 and 2018 combined. The boost is resulted from fear of persecution by the government of President Daniel Ortega, according to Despacho 505. In April 2018, Nicaraguans occupied the streets to protest against social security reforms and were repressed by authorities, leading to a series of demonstrations in the following months that left at least 300 people dead. UN High Commissioner for Human Rights Michele Bachelet said the government committed abuses against activists, 100 of which are in prison.

MEXICO: Mexico’s ex-security chief Genaro García Luna was arrested Monday in the United States on a drugs-linked bribery charge. García Luna accepted bribes from Joaquín “El Chapo” Guzmán’s Sinaloa cartel, according to court papers. The 51-year-old security chief was charged with three counts of cocaine trafficking and a false statement charge in a Brooklyn federal court. García Luna will remain in custody while awaiting a bail hearing Dec. 17. Former president Felipe Calderón said yesterday that he was not aware of the charges against García Luna.

UNITED STATES: House Democrats and the White House finalized a trade deal yesterday that will replace the North American Free Trade Agreement (NAFTA). The modified U.S.-Mexico-Canada Agreement is “infinitely better” than the 25-year-old NAFTA deal, according to House Speaker Nancy Pelosi. Trump also said the revised pact will “be great” for the United States. Representatives from the three countries signed the pact in Mexico. The deal announcement came on the same day as the announcement of articles of impeachment against Trump.

U.S.-MEXICO BORDER: The Pentagon’s Office of the Inspector General is looking into deployments of U.S. troops at the U.S.-Mexico border. According to NBC News, troop levels at the border have exceeded 5,000 since President Donald Trump began deploying them in April 2018. The Pentagon inspector general will determine whether military deployment to the border is legal. The investigation resulted from a mailed request by 34 Senate Democrats to IG Glenn Fine in September. The evaluation will look into types of activities the military conducts on the border, the training members receive and deployment costs.