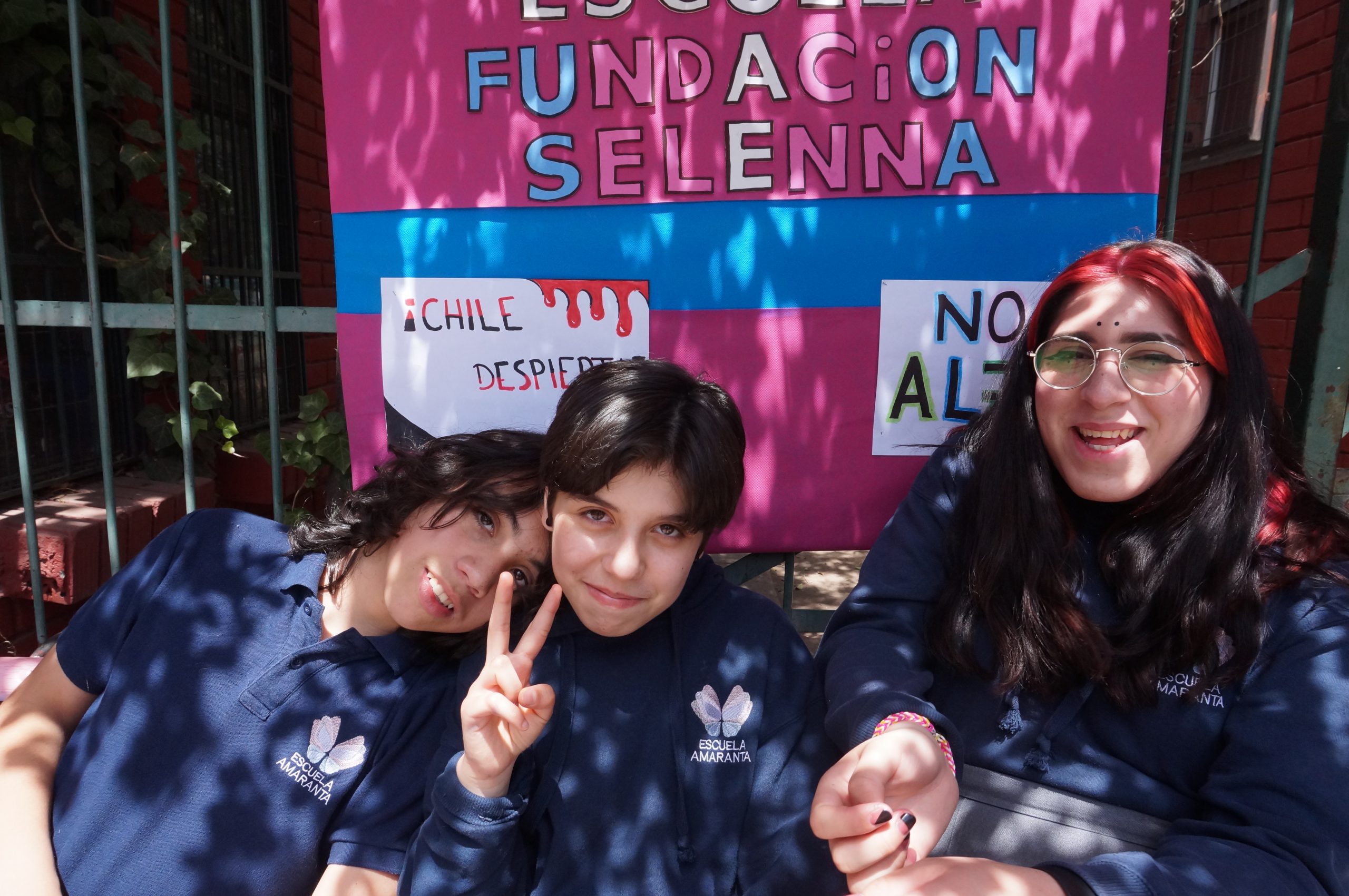 SANTIAGO, Chile — Angela vividly remembers the first days back at her old school after starting her transition three years ago.

“I wanted to reintegrate but the teachers and students didn’t know how to treat me. They wouldn’t call me Angela. They would only call me by my legal name. I knew people were talking about me behind my back,” the 15-year-old tells Latino USA. “I think it was hidden bullying.”

Angela felt forced to drop out of school in Santiago, Chile and was out of education for a year—until she found Amaranta.

The Escuela Amaranta Gómez Regalado or Amaranta School, run by the NGO Selenna Foundation, is believed to be Latin America’s first school for transgender children.

Tucked away in a community center in the Santiago neighborhood of Ñuñoa, the volunteer-run school provides a safe space for transgender children who have been pushed out of the system after facing discrimination.

A gender identity law that would allow trans people over the age of 14 to legally change their name in official records with the consent of their parents or guardians was passed by Congress in 2018 in a historic move for transgender rights in Chile. But the law has yet to come into effect, and intolerance remains widespread.

These laws have met resistance from conservative lawmakers and church leaders who say these moves undermine society. Last year, for example, Ivan Moreira, a senator from Chile’s conservative UDI party, described the gender identity law as an “aberration” that would divide families.

These attitudes can be especially damaging for children: a study by UNESCO placed Chile as the Latin American country with the highest rate of reported bullying among LGBTI students, with 68 percent of LGBTI students reporting to have experienced some kind of bullying.

For the children at Amaranta, this school gives them a security they’d never felt before.

“This school is very necessary. There are many people who have bad experiences at their school, so we need more places like this,” says 13-year-old Víctor, who started attending Amaranta this year.

“I think people want to believe we [transgender people] don’t exist. At my other school I didn’t have friends, I ended up being alone because no one asked me what I was going through, so I was always feeling sad,” Víctor explains. “But in this school we understand each other, it’s much more inclusive.”

“It’s very important for us and people like us. It’s beautiful for diversity and trans people,” Angela says. “This is also something exciting because ultimately we are fighting, and I think this [school] is something really historic.”

The children sit together in one of the school’s two classrooms, with paper and origami spread across tables. Aside from standard classes like Math, Language, History and English, a lot of time is dedicated to the pupils’ own personal development and well-being, such as origami workshops as a way to focus their mind.

Transgender adults give talks about their own experiences, and children have lessons about gender identity, sex education and human rights.

The school, however, is not solely for transgender children. It also provides a space for anyone left outside the traditional education system.

Jorge, 13, shares a a small origami bird he’s been working on. He identifies as cisgender and came to Amaranta because he was bullied at other schools.

“I have never been able to fit into a traditional school. At one school they would call me poor, at another school they would bully me for something else,” he says. “Once I got here, it was awesome. I feel comfortable.”

With the end of term approaching, this will be the first time Jorge will finish a school year.

“We are not only here because of transgender children,” Selenna Foundation president Evelyn Silva says. “We are here because we believe that education in our country needs to have a new vision, a new form.”

It’s a sentiment being echoed across the country as Chile faces a historic social uprising over decades of inequality.

Silva founded the school in April 2018 to create a space for children who were excluded, and help them prepare for their exámenes libres. Five students have now turned into 50, and a year and a half later, as Chileans protest on the street calling for dignity and better education, the school has a different role.

“This place symbolizes equality, in all the sense—gender, economy, everything. We have kids here whose parents are doctors, and others are construction people. Here it is inclusive,” Silva says. “It’s essential for Chilean society. Schools should be places for people to get together, make a community. If children learn these things —identity, human rights, equality— at early ages, we wouldn’t be in the trouble we are in now as adults. So this place today in Chile takes on a real importance.”