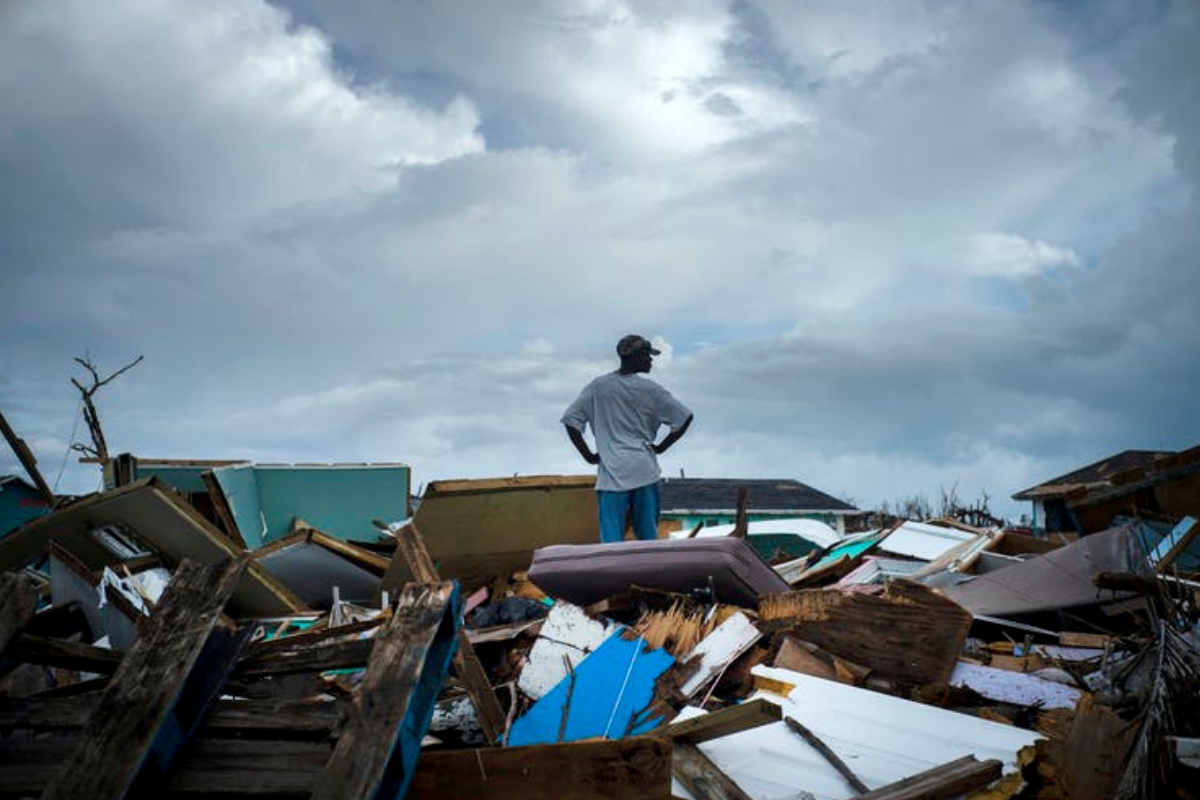 A man stands on the rubble of his home in the Haitian Quarter, after the passage of the Hurricane Dorian in Abaco, Bahamas, Sept. 16, 2019. (AP Photo/Ramon Espinosa)

Haiti wasn’t on Hurricane Dorian’s slow-moving path of destruction across the Caribbean in early September, but Haitians are suffering in the storm’s aftermath anyway.

In the Bahamas, which was flooded and flattened by the Category 5 Dorian on September 1, 2019, a nationalist group called “Operation Sovereign Bahamas” is demanding the Bahamian government evict hundreds of Haitians from a shelter for hurricane victims.

An estimated 76,000 people in the Bahamas were left homeless after Dorian rendered parts of some Bahamian islands uninhabitable. That includes at least 340 Haitian migrant workers deported since the storm, according to Giuseppe Loprete, chief of the Haitian mission of the International Organization for Migration, an intergovernmental agency that defends the rights of migrants.

“The Bahamas is for Bahamians,” said Operation Sovereign Bahamas’ founder, Adrian Francis. He had staged a protest outside the hurricane shelter set up in the Kendal G.L. Issacs Gymnasium in Nassau, according to Eyewitness News Bahamas.

“We want you out of our country,” shouted other protesters, holding Bahamian flags. “Go home!”

Haitians In The Bahamas

Haitians have been going to the Bahamas, a nation of over 700 islands and keys about 530 miles northeast of Haiti, for centuries.

In the late 1790s, Haitians sought refuge in the Bahamas from the upheaval of the Haitian Revolution, when enslaved Africans on the island rose up against French colonizers to create the Americas’ first free black nation. This wave of migration accounts for the prevalence of French surnames like Delaveaux, Duvalier, Moncur and Poitier among modern Bahamians.

Between 1957 and 1981, Haitians escaping the political violence of the Duvalier dictatorships also fled to the Bahamas. In 1962, there were 10,000 Haitian migrants in the Bahamas, according to author Keith Tinker—about 15 percent of the country’s total population. By 1969, the population had doubled to 20,000. The majority of migrants came from the lower classes of Haiti’s poorest regions, my research finds.

In recent decades, Haitians have gone to the Bahamas to find work. The Bahamas is a comparatively wealthy Caribbean country with a booming tourism industry. Its average per capita income of $21,280 a year eclipses that of Haiti, where annual earnings average $1,800.

According to the 2010 Bahamas census, there are approximately 39,000 people of Haitian descent living there. Since obtaining a foreign work permit in the Bahamas is an onerous legal process that requires an employer sponsor, most Haitians workers are undocumented. Many earn the minimum wage of US$5.25 an hour or less.

Haitians usually do the jobs that local Bahamians do not want to do. The Bahamas depends on Haitians to farm, landscape, clean hotels, paint houses, fix cars, work in construction and bus restaurant tables. Haitian women braid hair, wait tables, sell goods on the street and serve as cashiers at duty-free liquor stores and gas stations.

In research for my 2014 book on the two islands’ long, intertwined history, I found that Haitians have long faced discrimination and stigmatization in the Bahamas.

Though people in both the Bahamas and Haiti are predominantly of African descent and share a heritage of colonization and slavery, many Bahamians look down on Haitians. I heard Bahamanians associate Haiti with poverty and low education, and its workers with illegal status.

Widely held stereotypes portray Haitians as a burden on the Bahamas’ economy and a strain on its health care, education and social services systems. Many Bahamians even think Haitians have a proclivity for violence.

The chaotic aftermath of Hurricane Dorian has exacerbated anti-Haitian sentiment in the Bahamas, I found.

Hate-filled social media posts and voice messages shared by Bahamians on Facebook include rumors about “packs” of Haitians roaming flooded areas of the island, looting and robbing abandoned buildings. Commentators called Haitians “thugs” and said those who commit crimes in the wake of Hurricane Dorian should be “shot in the head.”

A Bahamian of Haitian descent who works with Rights Bahamas, a human rights organization aiding in relief efforts, received a death threat due to his organization’s advocacy on behalf of Haitians.

The Bahamian government, overwhelmed by what Prime Minister Hubert Minnis has called the “generational devastation” wrought by Dorian, has not defended Haitian migrant workers.

In his first post-hurricane speech, on October 2, Minnis said his government would “eradicate” the shantytowns where many poor Haitians live. A few days later, during a visit to the island of Abaco, which was rendered nearly uninhabitable by the storm, Minnis kicked down the door of one shantytown home.

“I send a notice to illegals that they can leave voluntarily,” he said, “or they will be forced to leave.”

The Bahamas’ attorney general has likewise called for migrant storm victims who had lost their jobs to go home, even those with work permits that had not yet expired.

The Future Of Haitians In The Bahamas Post-Dorian

Some in both the Bahamas and the United States have suggested that the Bahamian government give temporary status to Haitian migrants who lost their homes or jobs in Hurricane Dorian.

Haiti has not yet recovered from its 2010 earthquake and is currently embroiled in revolutionary turmoil. Its government is barely functioning.

The International Organization of Migration, which recently launched a $10 million funding appeal for Hurricane Dorian disaster relief, warns that under such circumstances, resettlement in Haiti is difficult and that Haitian migrants deported from the Bahamas risk becoming a stateless people.

Beyond human rights, there are practical reasons for Bahamas to take care of migrant workers: Its economy depends on them. Haitian agricultural laborers, carpenters and construction workers provide precisely the labor necessary to rebuild the country after Dorian.

Haitian migrant workers need the Bahamas. But the Bahamas needs Haitians, too.