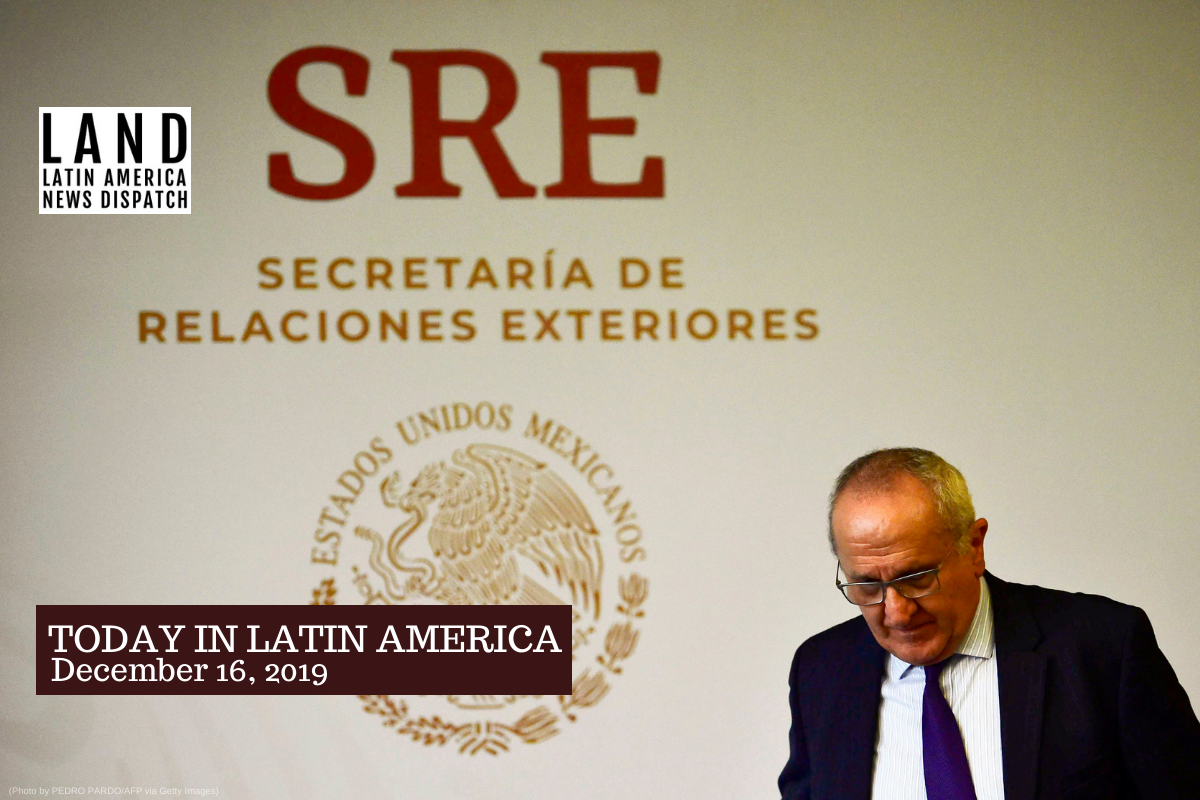 The Mexican undersecretary for North America and main negotiator for the trade agreement with the United States, Jesús Seade arrives for a press conference in Mexico City, on May 30, 2019. (Photo by PEDRO PARDO/AFP via Getty Images)

MEXICO: After initially signing an agreement to replace the North American Free Trade Agreement, Mexico objected to legislation to ratify the U.S.-Mexico-Canada Agreement on Saturday. Jesús Seade, the Mexican Foreign Relations Department’s undersecretary and chief trade negotiator for North America, flew to Washington yesterday for urgent talks with U.S. representatives after they added in new provisions that had not been approved by Mexico’s representatives. The additions afforded the United States five new labor attaches in Mexico tasked with overseeing labor reforms, which Seade called unnecessary “political decisions.”

Mexico had previously rejected the American oversight, instead proposing panels made up of representatives of both countries. Seade added that in the future, “Mexico will evaluate not only the measures proposed in the (bill) … but the establishment of reciprocal mechanisms in defense of our country’s interests.” Mexico’s economy is heavily dependent on foreign investment and trade with its northern neighbor, and President Andrés Manuel López Obrador has been strongly supportive of negotiations to create a successor to the 25-year-old NAFTA.

COLOMBIA: Forensic scientists directed by the Colombian Special Peace Tribunal have begun disinterring the bodies of victims tied to the “false positives” military scandal. The scandal involved Colombian military officers killing civilians and disguising them as guerrillas for extra pay and other benefits. So far, scientists have exhumed the remains of seven men buried at the Las Mercedes de Dabeiba Catholic Cemetery.

VENEZUELA: According to new information, Erik Prince, a major donor to U.S. President Donald Trump and founder of the security firm Blackwater, visited Venezuelan Vice President Delcy Rodríguez in Caracas last month. Sources familiar with the meeting were uncertain whether Prince had been sent with a message from Trump. An anonymous source told the Associated Press that Prince asked Rodríguez to release six Citgo employees detained on charges of embezzlement. Two weeks later, the men were released on house arrest.

CUBA: Despite United States embargoes, this year’s tourist numbers in Cuba will reach slightly more than 4 million, according to the island’s government. Minister of Tourism Manuel Marrero Cruz announced on Twitter that the number of tourists reached 4 million on Thursday.

The government had hoped to surpass the 5 million mark in 2019, but United States sanctions and travel restrictions have reduced American visitors to Cuba, which heavily depends on income from the tourism sector. Just this week, a U.S. ban on U.S. carrier flights to cities other than Cuba’s capital Havana went into effect.

NICARAGUA: Nicaragua nationalized the fuel distribution company DNP on Saturday, two days after the United States imposed sanctions on it for allegedly being used by President Daniel Ortega’s family for money laundering. The bill was approved by the country’s National Assembly, which is controlled by the ruling Sandinista National Liberation Front, and declared the assets of the company a matter of “citizen security and national interest.” DNP controls a third of the country’s gas sales. On Thursday, Washington announced sanctions targeting companies that Rafael Antonio Ortega Murillo, the president’s son, owns or controls for his alleged role in money laundering and corruption.

GUATEMALA: A 64-year-old Guatemalan man sought for his involvement in a massacre of Indigenous Guatemalans in the 1980s is slated to be sentenced Friday in Boston federal court for illegal re-entry into the United States. Francisco Cuxum Alvarado was arrested in Waltham, Massachusetts, in April and admitted he was a member of a civil militia that helped remove Maya Achi people from the Rio Negro area of Guatemela. Cuxum Alvarado had entered the country illegally in 2004 and now faces up to two years in prison and a fine of $250,000.

HONDURAS: The director of Honduras’ maximum security prison, Pedro Ildefonso Armas, was killed on Friday by a gang of gunmen on motorcycles. Armas was driving a pickup truck in a village in Choluteca when the gunmen shot him several times. According to Armas’s wife, the director had asked for political asylum after receiving multiple death threats. A witness against ex-congressman Antonio “Tony” Hernández, younger brother of President Juan Orlando Hernández, was killed in the same prison in October.

MEXICO: Only 0.1 percent of asylum seekers have been granted asylum in the United States under the new “Remain in Mexico” policy, according to new data by the Transactional Records Access Clearinghouse at Syracuse University. Only 11 people have been granted asylum in the last year. Outside of this process, the asylum acceptance rate is as high as 20 percent. The data also shows that under the new Migrant Protection Protocols, fewer than 10,000 out of 47,000 applicants had completed their cases.

MEXICO: Residents of 84 municipalities in Mexico’s Yucatán Peninsula were set to vote on President Andrés Manuel López Obrador’s Mayan Train project yesterday. After holding regional meetings with Indigenous communities this weekend, López Obrador says the project’s future is now in the hands of the people who would be most affected by it. Critics question whether the communities have all the information they need to make a decision. Others oppose the project because of possible environmental risks and the threat of driving land speculation. The train would run 950 miles around the peninsula connecting the beaches of the Mayan Riviera resorts with archaeological sites in the interior and the colonial city of Mérida.