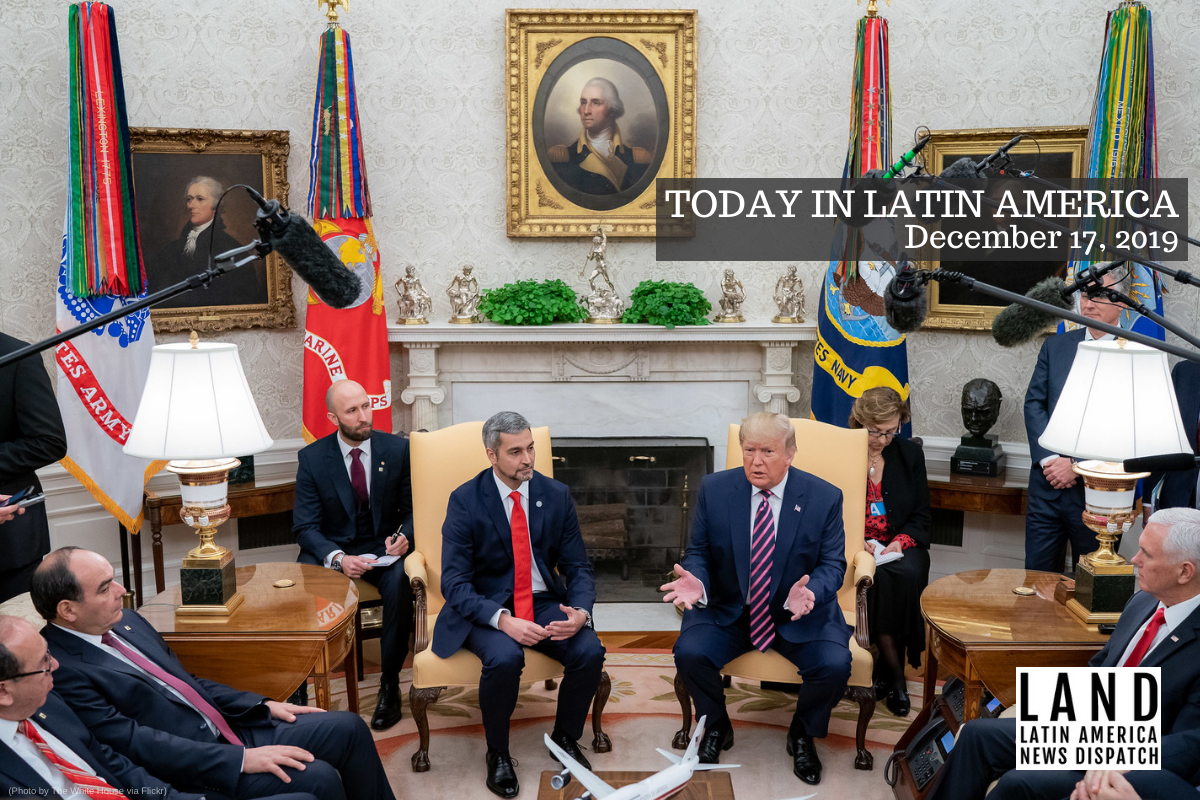 PARAGUAY: President Mario Abdo Benítez acknowledged a joint cooperation between his government and the Federal Bureau of Intelligence on Sunday, after returning from a weekend meeting with U.S. President Donald Trump. Abdo Benítez said the FBI’s involvement has served to support Paraguay’s own security forces in “a more efficient fight against organized crime, against money laundering and drug trafficking.” Abdo Benítez denied that the efforts were a form of “foreign interference.”

Ahead of the meeting on Friday, Trump said the meeting would address corruption in the region, opening markets and continued cooperation between the two countries. Abdo Benítez said Trump agreed to continue supporting intelligence efforts and provide training for federal employees.

ARGENTINA: A former police officer and torturer during Argentina’s last military dictatorship was extradited from France yesterday, after 30 years of living abroad. Mario Sandoval is wanted for the murder and kidnapping of architect student Hernán Abriatta in 1976, as well as other crimes including torture and unlawful detentions at a clandestine center in Buenos Aires. After fleeing to France, Sandoval became a lecturer, eventually teaching at the Sorbonne, and served as an advisor to the former French President Nicolas Sarközy. His former colleagues and human rights groups have been calling for his arrest for years.

BOLIVIA: After receiving asylum in Argentina, Evo Morales met with President Alberto Fernández this weekend, prompting leaders in Bolivia to accuse Argentina of violating international conventions. Minister of the Presidency Yerko Núñez said that Argentina’s support of the ousted leader is grounds to denounce the country on an international level. He said he was disappointed that countries were “giving support to a person who has clearly committed fraud, sedition and terrorism in Bolivia.” President Fernández’s chief of staff, Santiago Cafiero, said Morales has “freedom of expression, to declare, to think and say what he wants.”

PUERTO RICO: Governor Wanda Vázquez said she will run in the 2020 general elections and face candidate Pedro Pierluisi in the primaries of the pro-statehood New Progressive Party. Vázquez became the island’s second female governor in August after former Governor Ricardo Rosselló resigned in the face of massive protests fueled by the leaking of obscene and derogatory chat messages involving him and government officials. After that, Pierluisi was sworn in as governor, but the Supreme Court decided that, according to the Constitution, Vázquez was the legitimate heir. At the time, she said she was not interested in the position and would serve until December 2020.

HAITI: President Jovenel Moïse told the EFE news agency that Haiti is “ungovernable,” with the current laws “giving the president extremely limited powers.” He said he is in favor of a new Constitution, which would only be ready in time for the next president’s administration, not his own. Moïse is facing political turmoil in Haiti, with inflation near 20 percent. Discontent with these economic circumstances and allegations of corruption led to a series of protests in September demanding the president’s resignation. In two months of unrest, 42 people were killed, 19 by the hands of security forces, according to the UN.

COSTA RICA: The Costa Rican government will request international assistance to deal with its migrant crisis, said President Carlos Alvarado before traveling to Geneva for the Global Refugee Forum. The Forum is a three-day gathering of refugees, heads of state, UN leaders and organizations. Alvarado said the majority of the refugees who enter Costa Rica are fleeing from Nicaragua and Venezuela. In a video that reunites three of Costa Rica’s former presidents who support Alvarado’s cause, Laura Chinchilla said that by the end of this year 100,000 Nicaraguans and 30,000 Venezuelans will be living in Costa Rica. She also said that the country receives the second largest population of immigrants in the hemisphere, only behind the U.S.

MEXICO: A weekend referendum held on the Mayan Train project showed overwhelming support for the construction of a nearly 950-mile long route in the Yucatán Peninsula. The vote, held in the five Mexican states where the train would be built, ranged from 85 percent to 99 percent in support of the train. Just over 100,000 people voted in a region of the country that is home to 11 million. President Andrés Manuel López Obrador has said that the Mayan Train project will commence, citing the referendum as proof of public support of the project. Some Indigenous and environmental groups have raised concerns about the train, designed to carry tourists from beaches to the peninsula’s interior.

MEXICO: The U.S.-Mexico-Canada Agreement (USMCA) is back on track after a dispute over additions to the treaty, allowing for five American “labor inspectors” to oversee Mexican labor reforms. Jesús Seade, the Mexican undersecretary for North America, had previously written that he was “surprised” by the treaty, which has already been ratified by the three countries. The U.S. trade representative said that the five personnel were not “inspectors” and would serve to provide technical assistance, while abiding by Mexican law. Yesterday, Seade said that he was pleased with the description.

UNITED STATES: Democratic presidential candidate Pete Buttigieg has promised a “new era” for Latinos in the country, as he unveils a set of policy proposals designed to end the “discriminatory policies” enacted by the Trump administration. Buttigieg has struggled to gain the support of non-white voters in his campaign, and his “El Pueblo Unido/A People United: A New Era for Latinos” proposals form part of his recent efforts to gain the Latino vote. His plan pledges to provide “a path to citizenship” for some 11 million undocumented people in the United States, as well as $10 billion in federal funding for underrepresented and Latino-owned businesses.