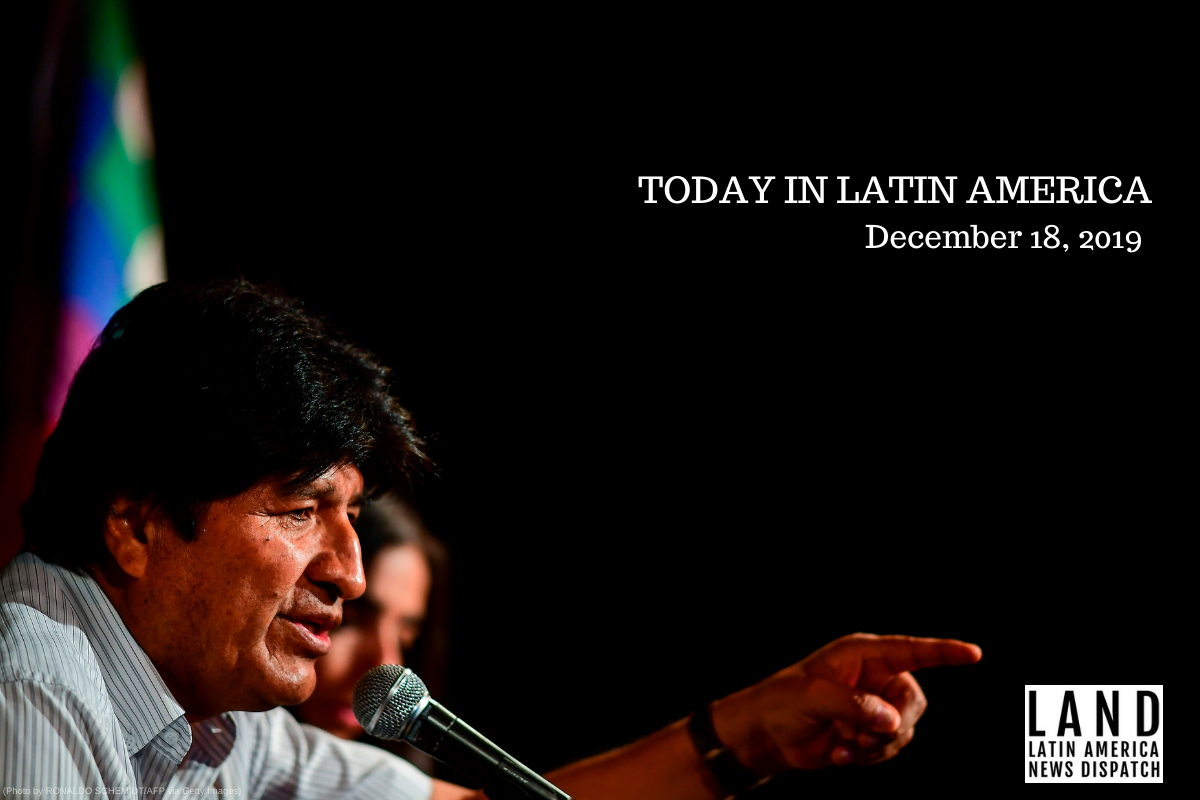 Catacora, 56, is a former finance minister who fled to Mexico with Morales after the Bolivian military forced him out in November. Rodríguez, 30, is popular among young people and led pro-Morales protests that shook the country after right-wing leader Jeanine Añez assumed the interim presidency.

We support @JeanineAnez in Bolivia as she works to ensure a peaceful democratic transition through free elections. We denounce the ongoing violence and those that provoke it both in Bolivia and from afar. The U.S. stands with the people of the region for peace and democracy!

U.S. President Donald Trump said in a tweet yesterday that he supports Añez because “she works to ensure a peaceful democratic transition through free elections.”

PERU: Two teenagers died inside a Lima McDonald’s over the weekend after being electrocuted by a loose cable in the restaurant. Their deaths have brought up issues with the regulation of labor conditions and practices in a country that has depended on large companies for economic growth. Alexandra Porras Inga’s and Gabriel Campos Zapata’s deaths have prompted an investigation into the working conditions at the restaurant by the country’s workplace safety department. Porras Inga’s mother told The New York Times she does not believe her daughter was wearing proper safety equipment and was washing the floor around exposed wires.

COLOMBIA: The mayor-elect of Bogotá, Claudia López, married her partner in a private civil ceremony Monday night. López married Angélica Lozano, a senator in Congress, after a three-year relationship. On Twitter, López captured her year by writing, “I graduated with my doctorate, won mayoral office and married the love of my life!” López is the capital city’s first female and LGBTQ mayor.

VENEZUELA: Four more opposition legislators will be put on trial for rebellion and treason by the Venezuelan Supreme Court for their alleged role in a failed military uprising in April. In total, 23 opposition lawmakers are being prosecuted by the government. Opposition leader Juan Guaidó called the moves an attack on the only branch of government not under President Nicolás Maduro’s rule. The Supreme Court is stacked with Maduro loyalists.

PUERTO RICO & THE BAHAMAS: Both Puerto Rico and the Bahamas continue funding the reconstruction of their respective countries after damage caused by recent hurricane seasons. The Federal Emergency Management Agency and Puerto Rico’s Central Office for Recovery, Reconstruction and Resilience have set aside more than $5.4 million of additional funds to repair damage caused by Hurricanes Irma and Maria in 2017. The Caribbean Development Bank has approved a loan of $50 million to help recovery in the Bahamas after the damage caused by Hurricane Dorian earlier this year. Both countries also aim to build more protective measures into their planned reconstructions to be prepared for any future natural disasters.

HONDURAS: Honduras declared a state of emergency in its prison systems yesterday evening, four days after the director of Honduras’ maximum security prison was killed. Government officials stated that the declaration was necessary in order to “stabilize” the situation and to avoid further “acts of violence and death.” The government plans on rooting out corruption within the prison system by granting control of all prisons to the military and determining which prison guards and administrators will be allowed to keep their jobs.

EL SALVADOR: The office of the Anti-Corruption Prosecutor of Panama is investigating a money laundering case involving Alba Petróleos, a Salvadoran-based fuel company supported by multiple members of the political party Farabundo Martí National Liberation Front, more widely known as FMLN. Panama officials will be looking into two offshore companies in the case, including Desarrollo Internacional SA, which received millions of dollars from Alba Petróleos in 2008 to allegedly set up an electric power generation project. A number of FMLN politicians were implicated in the scandal, including the former mayor of San Pedro Perulapán Miguel Hernández and Deputy Carlos Ruiz.

MEXICO: Twelve police officers in the central Mexican state of Guanajuato were killed in just one week, including a woman on the force whose body was later found dismembered. Officer María Sonia Arellano, who had recently received a merit award, was kidnapped with her husband and son, who were later released, in the city of Irapuato. The Cartel Jalisco Nueva Generación claimed responsibility for her murder. On Monday, Guanajuato Mayor Ricardo Ortiz Gutiérrez accused the Attorney General’s Office of failing to act in any of the murders, calling it a “situation of impunity.”

MEXICO: Mexico raised its minimum wage to USD $6.50 a day —a 20 percent increase— on Monday, causing some experts to worry about the possibility of out-of-control inflation. In northern regions near the border, the raise will be just 5 percent, but the rate is still higher overall at $9.80 a day. Mexico had already increased the minimum wage by 16 percent earlier this year, prompting core inflation to rise to 3.65 percent. Mexico’s secretary of finance and public credit said yesterday, however, that the latest minimum wage hike will not impact job creation or cause inflation.

UNITED STATES/MEXICO: Genaro García Luna, Mexico’s former secretary of public security during the administration of President Felipe Calderón, was denied bail by a judge in Dallas yesterday. García Luna awaits trial on charges of accepting bribes for allowing Joaquín “El Chapo” Guzmán’s Sinaloa drug cartel to operate with impunity. He will remain in Texas until he is transferred to New York City, where El Chapo was tried last year. The FBI arrested García Luna last week, and he was indicted on counts of cocaine trafficking and making false statements.