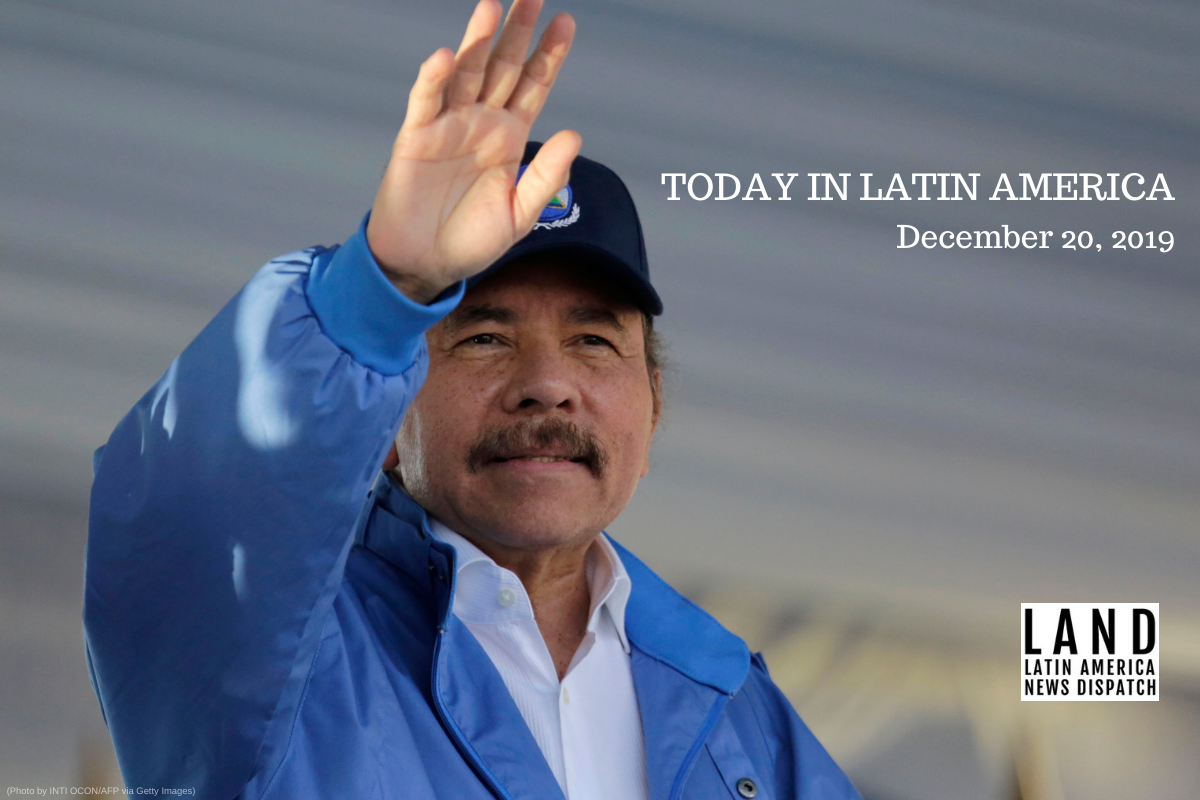 Nicaraguan President Daniel Ortega, waves to supporters during a rally marking the 40th Anniversary of the National Palace's takeover by the Sandinista guerrillas prior to the triumph of the revolution, in Managua on August 22, 2018. (Photo by INTI OCON/AFP via Getty Images)

NICARAGUA: The European Parliament has approved a resolution against President Daniel Ortega and recommended sanctions against top leaders for human rights violations, according to La Prensa. The “Situation of Human Rights and Democracy in Nicaragua” resolution was approved with 560 votes in favor and only 12 against. It demands that the administration return to negotiations with opposition group Civic Alliance and consolidate the country’s Supreme Electoral Court. It also threatens to suspend Nicaragua from association agreements with the European Union. It does not expel Nicaragua from current trade negotiations. European leaders follow other nations, like the United States, which have continued to issue multi-level sanctions against Ortega officials in the last year.

Spanish MEP José Ramón Bauzà said that the most important aspect of the resolution is its “condemnation of crimes and repression” and its demands for “concrete measures to overcome the crisis” in Nicaragua. At the same time, Nicaraguans continue to protest for the release of political prisoners at the first national meeting between families and leaders. Participants called for prisoners to be released before Christmas and the “restoration of the rights of all and above all.”

BOLIVIA: Opposing parties reached an agreement to help the country set a new election day, after Evo Morales resigned as president in November amid allegations of fraud and protests against him. According to the AP, members of Morales’ party and the opposition agreed to elect six new judges to the Supreme Electoral Tribunal, the institution that oversees elections in the country. The former members of the court are under investigation for turning a blind eye to Morales’ alleged fraud in the early November presidential elections. La Razón reported that elections must be set no later than 10 days after the selection of the new members of the Supreme Electoral Tribunal.

PUERTO RICO: A federal ban on cockfighting went into effect in all U.S. territories today, despite Governor Wanda Vásquez’s attempts to defy the ban with a bill that authorizes the practice in Puerto Rico. The Parity in Animal Cruelty Enforcement Act, part of the 2018 Farm Bill passed last December, gave U.S. territories one year to comply with federal policies that banned animal fighting. But many Puerto Ricans intend to fight the ban and argue that the sport is part of a cultural tradition that goes back 400 years. Animal rights activists, such as PETA Latino, say the governor’s actions are “protecting a cruel industry.” Cockfighting brings in at least $18 million in revenue each year and employs more than 27,000 people.

CUBA: Officials have accused the United States of pressuring Latin American countries into refusing Cuban medical missionaries, in an attempt to cut off another of Cuba’s revenue streams. Johana Tablada, deputy director of North American affairs for Cuba’s Foreign Ministry, said in a press conference that the United States was attempting to “destabilize” the country through “hypocritical” foreign relations. The Trump administration has accused Cuba of using its medical missions to move intelligence agents around the region and alleged the doctors were being trafficked through “forced labor.” Thousands of medical personnel were removed from posts in Brazil, Ecuador and Bolivia this year, losing millions of dollars in revenue for Cuba.

PANAMA: Panama will hold a day of mourning today to honor those killed during the U.S.- led invasion that ousted dictator Manuel Noriega in 1989. The “Operation Just Cause” invasion led to the deaths of 300 soldiers and more than 200 civilians. Last year, the Inter-American Court on Human Rights called on the United States to pay compensation for its actions and blamed President George H.W. Bush for unnecessary casualties. The first of its kind, the day of mourning measure was passed Wednesday by President Laurentino Cortizo’s Cabinet and mandates the Panamanian flag to be flown at half-mast.

MEXICO: The United Nations High Commissioner for Human Rights office in Mexico criticized the Mayan Train initiative for not complying with the standards on human rights. Originally, the U.N. praised Mexico for its initial work on Indigenous rights, but days after the referendum on the multi-billion-dollar project it lacked inclusion of Indigenous women, was too brief and was too expensive for people to afford the fee to travel. The train referendum, one of President Andrés Manuel López Obrador’s promises from the 2018 presidential campaign, received praise from the office for committing to respecting human rights but also made sure to advocate for an inclusive plan.

MEXICO: The Bank of Mexico lowered interest rates to 7.25 percent. This year, the country experienced a stronger peso and saw an increase in the economy. However, the bank was careful to note that issues such as debt ratings and state oil remain “in an environment of marked uncertainty,” with “the balance of risks for growth continues slanting downward.”

MEXICO: In Chihuahua, there are almost 90,000 people living in extreme poverty, according to new research by the National Council for the Evaluation of Social Development Policy (Coneval). The head of Coneval Víctor Quintana Silveyra said there are insufficient resources to serve people living in extreme poverty. The State Office of Social Development will budget 580 million pesos in 2020 to provide to Chihuahua.