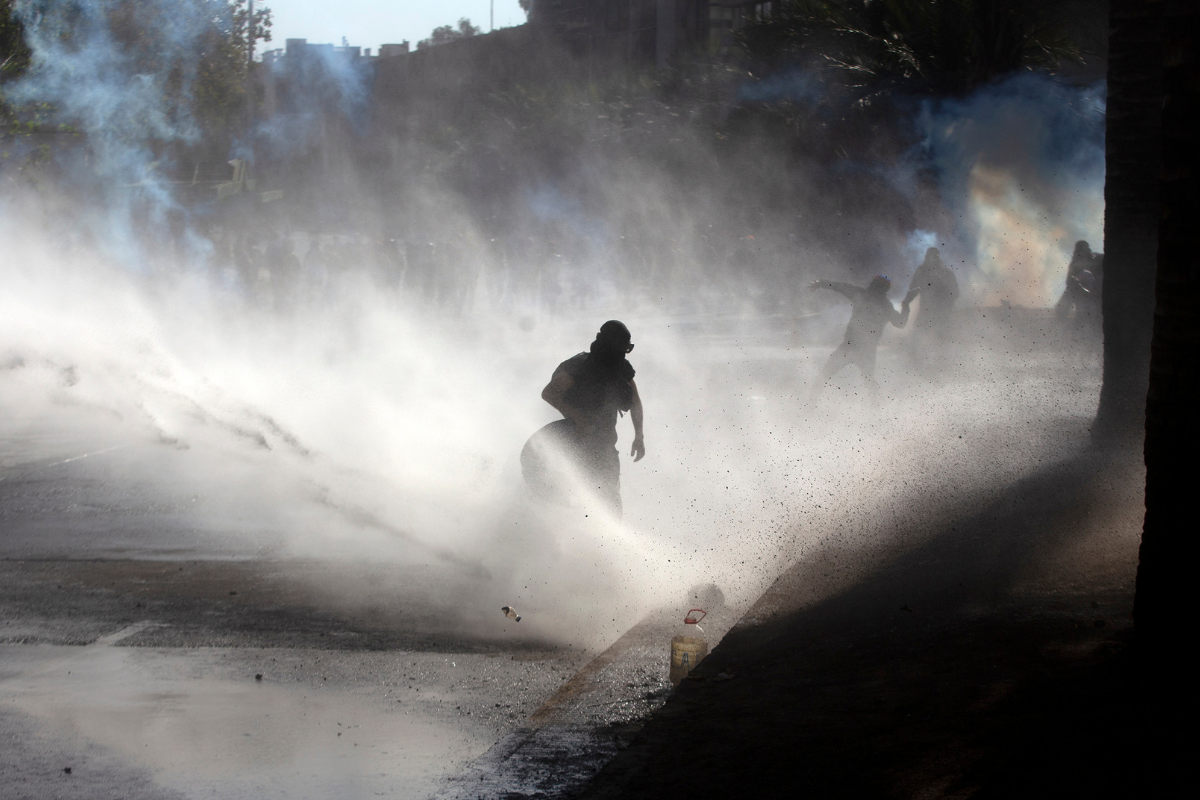 Protesters are sprayed with water during clashes with riot police on the first protest of the year against the government of President Sebastian Pinera, in Santiago on January 3, 2020. (Photo by CLAUDIO REYES/AFP via Getty Images)

That’s the startling finding of a still-unpublished study I conducted using data from the AmericasBarometer, a survey undertaken every two years in Latin American countries.

Although the massive demonstrations that have shaken Ecuador, Chile, Bolivia, Peru, Colombia and Paraguay since late 2018 have distinct origins and impacts —from transportation prices to election fraud— there are some commonalities.

All are an expression of deep frustration with the political status quo, and many demonstrators cite corruption, poverty and economic inequality as overlooked issues facing their nation.

Some South Americans, particularly young people and leftists, see these mass protest movements as positive. In Chile, 80 percent of people surveyed in October 2019 said they approved of demonstrators’ actions. In more conservative Colombia, 34 percent did.

But the protests have also been polarizing. For months, marches have disrupted people’s day-to-day activities and turned capital cities into conflict zones, creating some resentment, even fear that the social order is unraveling.

These feelings may be leading more South Americans to see autocratic governance as a necessity for maintaining law and order, my study of the AmericasBarometer’s survey data suggests.

The AmericasBarometer, which is part of the Latin American Public Opinion Project at Vanderbilt University, has documented a relationship between support for protests and autocratic tolerance for years.

In 2012, their surveys found that 30 percent of Latin Americans disapprove of “people conducting peaceful protests.” That group was 9 percent more likely than others to agree that the country needs “a strong leader who does not have to be elected by the vote of the people.”

In 2014, anti-protest respondents were 5 percent more likely to prefer an authoritarian government to a democratic one.

By late 2018, after large protests erupted in several Latin American countries, this same group was 12 percent less supportive of democratic governance than those who view protests favorably.

Latin Americans who disapprove of protesting are also slightly more likely than others to say that it would be acceptable for a president to dissolve Congress and govern without a legislature during difficult times. This is known as an “executive coup.”

In short, the AmericasBarometer surveys seems to indicate that protests increase tolerance for authoritarianism among Latin Americans.

Latin America has a complicated relationship with democracy.

Most countries in the region made heralded transitions away from military dictatorship in the 1980s. But public support for democracy in the region has been declining since 2010. Today less than half of Latin Americans think democracy is the best form of governance.

Given this political context, I put the preliminary survey findings that mass protests increase support for autocracy to the test. I chose two countries gripped by protests in 2019 (Chile and Ecuador) to study the relationship between demonstrations and democracy.

Specifically, my experiment investigated whether extreme civil disobedience —mass protests that disrupt the economy, prevent leaders from governing or shut down public services, for example— increases people’s preferences for autocracy.

I ran surveys online in Chile and Ecuador, recruiting respondents via Facebook by placing ads on users’ newsfeeds—a research method previously used to study political behavior. These participants were randomly assigned to one of two groups: a control group, in which respondents read entertainment news, and my test group, whose respondents read an article about protests threatening the country’s stability and citizens disobeying authorities.

Taken together, after controlling for sex, income and education, I found that people in Chile and Ecuador were 7 percent more likely to favor autocratic government if they read about protests threatening the social order.

Protests And The Fate Of Democracy

These demonstrations have given a voice to some citizens long excluded by the political system, and mass civil disobedience has won protesters some major concessions from government. In Chile, there are promises of a more equitable constitution. In Bolivia, President Evo Morales resigned during protests that followed allegations of election fraud.

But for Latin Americans unsettled by this political and social upheaval, authoritarianism is apparently starting to look more appealing.

As a result, South American demonstrations aimed at strengthening democracy may actually end up weakening it.