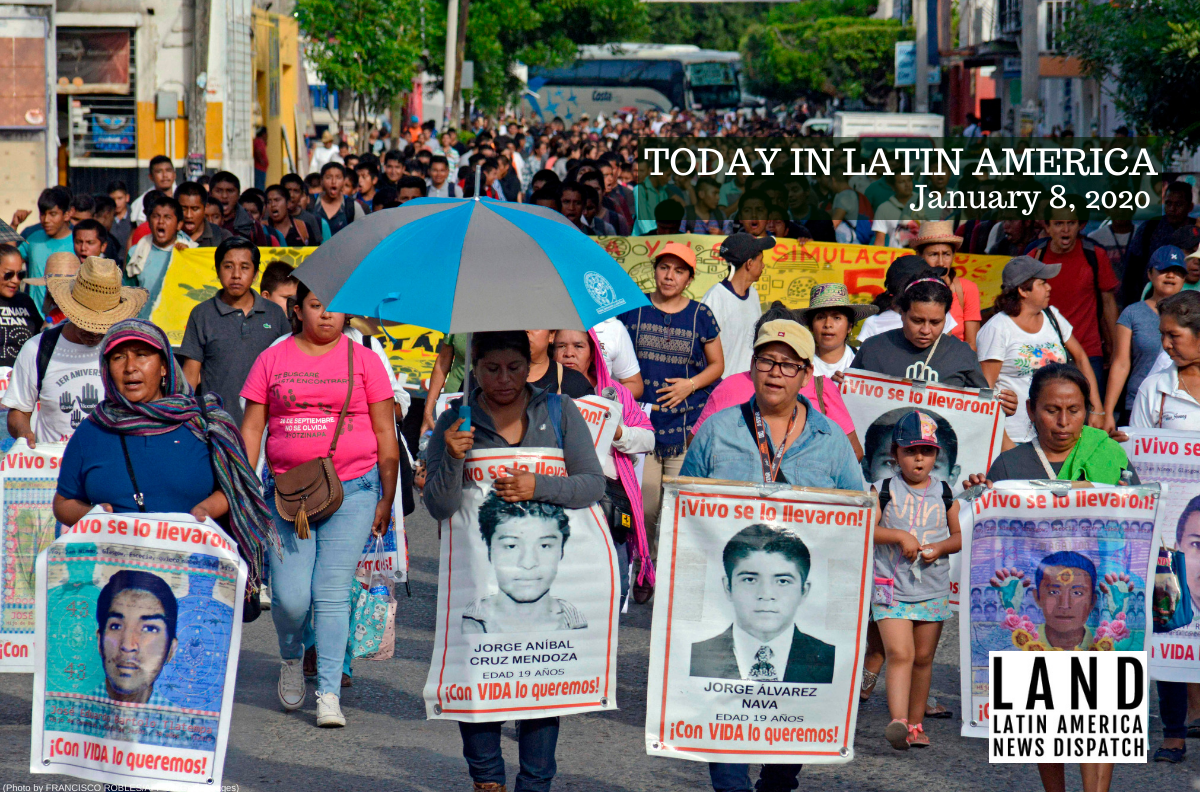 Relatives of the 43 missing students of the teaching training school of Ayotzinapa march with their portraits, in Iguala, Guerrero State, Mexico on September 27, 2019. (Photo by Francisco Robles/AFP via Getty Images)

MEXICO: Since the beginning of Mexico’s war on drugs in 2006, more than 60,000 people have been disappeared, new figures released by authorities revealed. The new estimate is much higher than the prior known number of 40,000 disappeared people. In 2019 alone, more than 5,000 people were disappeared. At a news conference on Monday, the head of the National Search Commission Karla Quintana said, “these are data of horror.” Almost 75 percent of the disappeared are men, the majority of whom are between 20 to 29 years old.

Working to find tens of thousands of missing people in the country, the National Search Commission has uncovered 873 burial graves and 1,124 corpses. The national search effort  has been at work for 13 months, and has yet to identify two-thirds of the bodies that were discovered. 243 of the bodies have been returned to the families of the victims. A little over 60 percent of the graves were discovered in the states of Sinaloa, Colima, Veracruz, Guerrero and Jalisco.

BRAZIL: Brazil seemingly backed the U.S.’s decision to kill Iranian General Qassem Soleimani, according to an official statement from Jan. 3. “Upon being made aware of the actions carried out by the United States in recent days in Iraq, the Brazilian government expresses its support against the scourge of terrorism,” the statement said. Experts considered Brazil’s stance is even stronger from that of other U.S. allies in NATO, and was congruent with President Jair Bolsonaro’s goal of aligning with President Donald Trump.

PUERTO RICO: Governor Wanda Vázquez Garced declared a state of emergency yesterday after the island was hit by successive earthquakes. A 6.4 magnitude earthquake early Tuesday morning killed an elderly man and injured several others. The quake destroyed several buildings—primarily in the town of Guanica. Smaller tremors shook the island throughout the day and brought down the electrical grid. Vázquez has activated the National Guard and is waiting for FEMA to also declare a state of emergency to release aid.

PANAMA: The annual report from the Panama Canal Authority released Monday showed that the watershed is currently suffering its driest three-year stretch. According to officials, the canal watershed received 20 percent less precipitation than its historic average. Due to the recent installment of new locks to accommodate larger vessels, the Canal now needs more water than ever before. Experts say that it will be harder to ensure operations while at the same time provide the supply of freshwater for the capital.

UNITED STATES-MEXICO: Asylum seekers coming to the United States border from Mexico can now be deported to Guatemala, as part of the “ safe-third-country agreement” signed with Guatemala in July 2019. Created in order to deter migration from Central America, the deal means Mexican asylum seekers could now be referred almost 2,000 miles south to Guatemala. Mexico’s Ministry of Foreign Affairs said on Monday that it disagreed with the U.S. policy, estimating that at least 900 Mexicans could be affected in the next month.