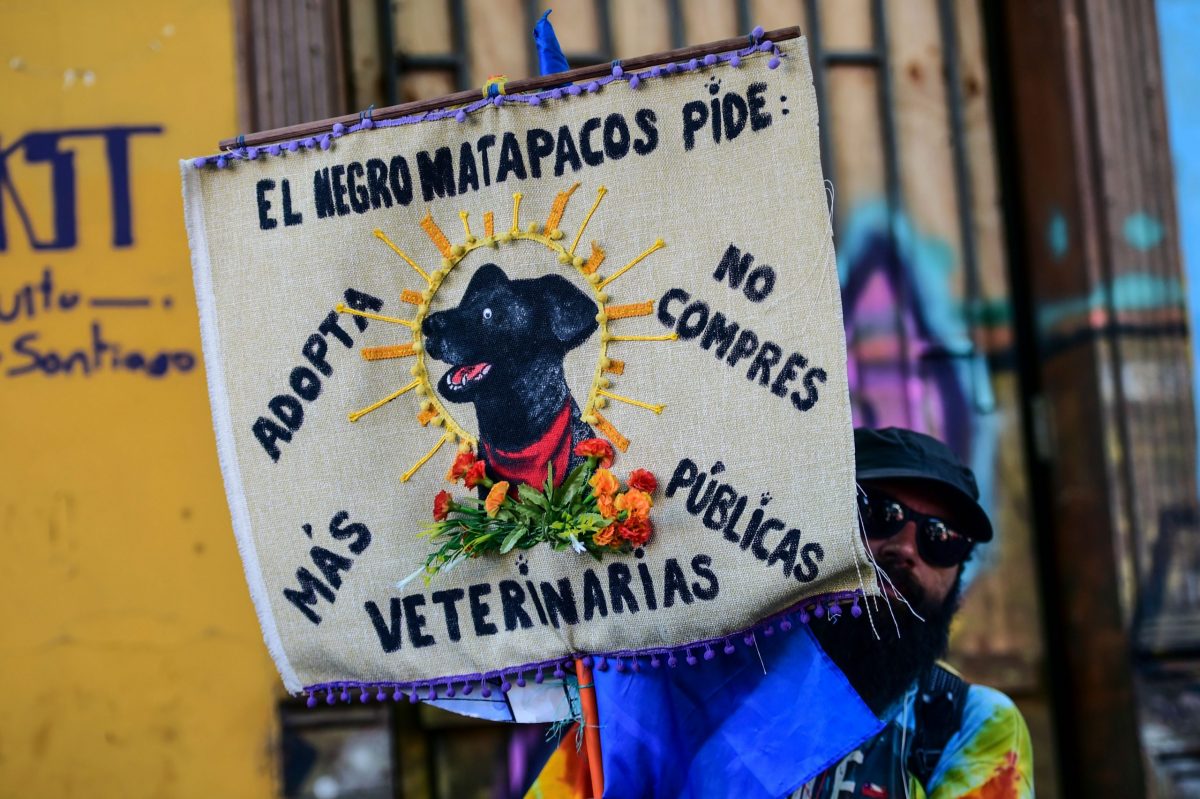 A man holds a sign with an image of Negro Matapacos, in Santiago, Chile. (Photo by MARTIN BERNETTI/AFP via Getty Images)

A black Chilean dog wearing a red bandana made his mark during the New York City subway protests beginning in November 2019.

The protests were ignited by videos documenting police assaults on black and brown youth in the subways. For example, in one, an officer punches a 15-year-old unarmed African American teenager in the face.

La rabia ha llegado a Nueva York. The “negro matapacos” (cop-killer dog) was a black dog from the streets of Santiago de Chile, who was seen at every protest, defying tear gas and water cannons, he became a symbol for the fight against repression and now he’s appeared in the NYC subway – – – – – – – – – – – – – #negromatapacos#protest#newyork#NYC#nycsubway#NYPD#blacklivesmatter#policebrutality#injustice#chiledesperto#drawing#poster#illustration#chiledespertó#chiledesperto🇨🇱 #newyorkcity @rageagainstthemachine

Who is this dog—and how did he end up in New York City protests?

His name is Negro Matapacos. The dog attained celebrity status for uniting with the protesters during the 2011 uprising in Chile for education reform, facing the police alongside the students.

I see Negro Matapacos’ legacy as providing a dramatic contrast to the use of dogs to suppress dissent. In my view, as someone who takes animal agency seriously, he joined the front lines voluntarily to defend the protesters against the police.

Negro Matapacos began spending time on the university campuses in Campos’ neighborhood. Along with a population of free-roaming dogs, he developed friendships with the students. He lived most of his life on Santiago’s streets. In 2009, a resident of the university district, Maria Campos, invited Negro Matapacos into her home. He thrived under her care, but was determined to remain independent. Though he slept at Campos’ house, she honored his choice to move freely about Santiago.

Campos reported that on protest mornings, Matapacos waited desperately to be let out. She said a prayer, traced a cross on his forehead and kissed him on the snout before opening the door. He then raced in the direction of the demonstrations.

Negro Matapacos —a name the dog received as he attained notoriety— literally translates to “Black Cop Killer.” In Latin America, it is not uncommon to use an animal’s color as their name. “Matapacos” has a specific local meaning, referencing the infamous brutality of the Chilean police. Negro Matapacos never killed anyone, but snarled, lunged and barked when the police threatened and assaulted the protesters.

Negro Matapacos died of natural causes in 2017, surrounded by caregivers. However, he continues to represent indignation against oppression.

In addition to New York City, Negro Matapacos’ image is featured in a mural in Malinarco, Mexico.

At Shibuya Station in Tokyo, a red bandana much like the one Negro Matapacos wore adorns Hachiko’s statue. Hachiko is a famous dog who awaited his guardian’s return from work long after his death.

These far-flung images of Negro Matapacos reflect the universality of his social justice message.

In a documentary about him, sociologist Jaime Rodriguez observed that the Chilean demonstrations beginning in 2011 responded to the absence of a social safety net. Chile’s free-roaming dogs epitomize exposure to harm: “There is nothing more precarious than a dog in the street,” Rodriguez said.

One student protester speculated to director Víctor Ramírez about why dogs like Negro Matapacos joined the students. He speaks to the shared vulnerability of free-roaming dogs and students to institutional violence.

Another protester references Matapacos’ yearning for recognition, which he got from the students: “We are marching for the things we need, and the dogs unite themselves to our cause. They unite themselves with us because they need our love and affection.”