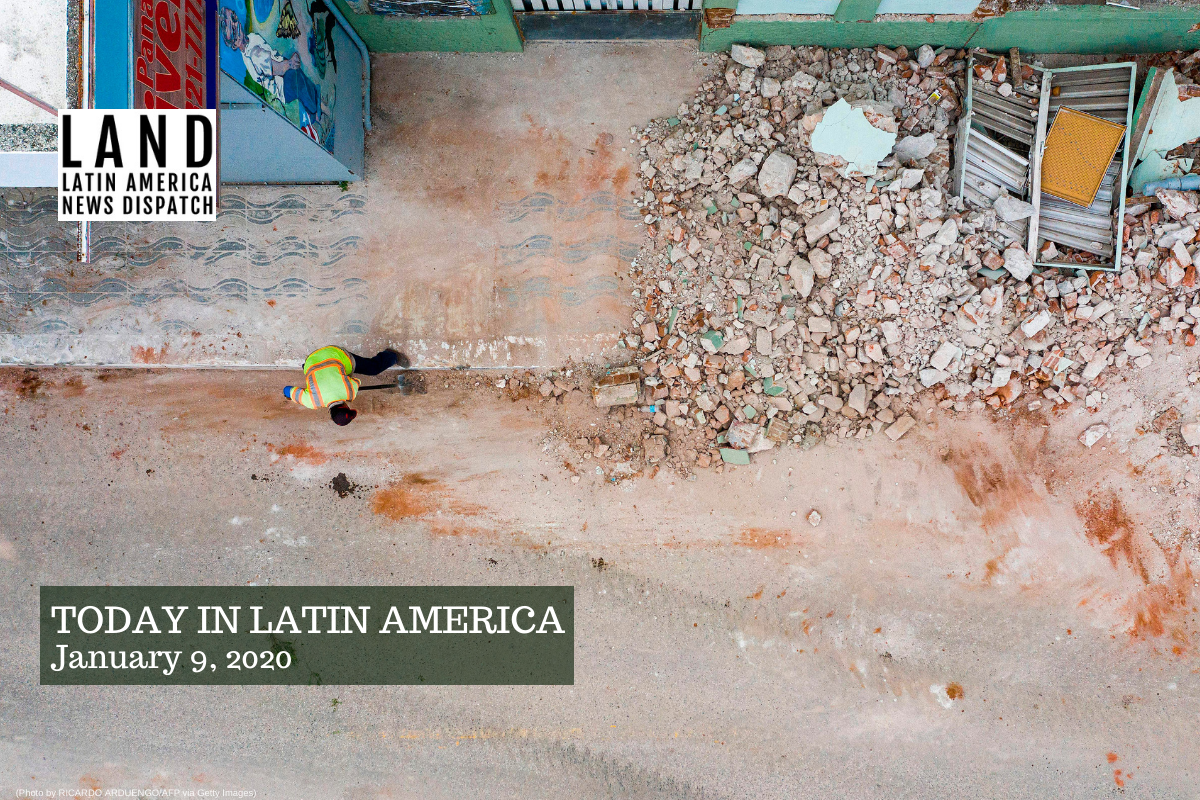 Debris is removed from collapsed buildings in Guanica, Puerto Rico on January 8, 2020, one day after the earthquake. (Photo by RICARDO ARDUENGO/AFP via Getty Images)

PUERTO RICO: According to a new assessment of the island’s situation after this week’s earthquakes, half a million Puerto Ricans don’t have power in their homes and 250,000 are living without water. Telecommunications were also affected. The southwestern town of Guánica was hit the hardest, with hundreds of homes and shelters destroyed. Many families are now homeless and have been forced to sleep in yards and parking lots. “We are confronting a crisis worse than Hurricane María,” said Guánica Mayor Santos Seda.

On Tuesday, President Donald Trump and Puerto Rico Governor Wanda Vásquez both declared a state of emergency, deploying the National Guard after the magnitude-6.4 earthquake—the strongest since 1918. Vásquez applauded federal involvement, saying that the magnitude of the earthquake was “so serious that the state government and the municipal governments of Puerto Rico do not have the capacity to respond effectively.” Since December 28, more than 950 earthquakes and aftershocks had been recorded on the Caribbean island.

BOLIVIA: The U.S. State Department is sending a delegation to the Andean nation this week to discuss aid. The delegation will be comprised of officials from the U.S. Agency of International Development. USAID was kicked out of Bolivia by its former president, Evo Morales, in 2013 for allegedly supporting groups and governments that opposed him. According to those with knowledge of the visit, the delegation has the stated aim of ensuring the May 3 elections run smoothly. On Monday, the White House lifted a ban on aid to Bolivia for failing to cooperate in the War on Drugs.

VENEZUELA: Twitter released a statement yesterday blaming “proactive systems” aimed at detecting “platform manipulations” in the suspension of over a dozen government institution accounts. The accounts of government institutions such as the oil ministry and armed forces’ operational command, the central bank, the finance ministry and others were suspended on Tuesday without explanation. Twitter invited account owners to appeal the system which is known to commit errors. Some of the accounts have already been restored.

COSTA RICA: The U.S. government elevated the travel alert for Costa Rica from level one to level two, warning American visitors to “exercise increased caution” in the country due to crime. The security guide issued by the Department of State alerts that theft and pickpocketing are the most common crimes in tourist areas, but that “more violent crimes, including sexual assault and murders, have occurred” as well. In a statement, Foreign Minister Manuel Ventura Robles expressed “the energetic protest by the Government of Costa Rica over the decision” and said the administration hopes to overcome the situation soon. Of the 2.8 million tourists who visit Costa Rica every year, more than 1.2 million are U.S. citizens. Other countries in Latin America with level two travel alerts are Brazil, Chile, Colombia and Mexico.

GUATEMALA: After the U.S. government said it would send Mexican asylum seekers to Guatemala, the President Jimmy Morales denied that he had agreed to the decision. Morales said that during his last visit to the White House with President Donald Trump, they agreed on sending only Salvadorans and Hondurans. Morales said Trump would have to discuss the acceptance of Mexican citizens “with the next government.” Morales’ administration ends next week, and will be succeeded by right-wing President-Elect Alejandro Giammattei. According to the UN Refugee Agency, more than half a million people were displaced from Central America in 2019 due to conflicts.

UNITED STATES: The Trump administration was blocked from enforcing the “public charge” immigration rule by a federal appeals court yesterday. By refusing to lift the injunction, issued previously in October 2019, the court prevents a rule that would withhold green cards from immigrants who are deemed likely to need government assistance such as food stamps, Medicaid and housing assistance. The 2nd U.S. Circuit Court of appeals also sped up the schedule for the White House’s appeal of a lower court’s decision against the rule. Critics of the rule say that it would disproportionately impact low-income immigrants and immigrants of color.

MEXICO: The FBI is offering to help Mexican authorities in the investigation of the shooting of an American family in Tamaulipas that killed a 13-year old-boy and wounded four others. The family was traveling on a highway parallel to the U.S.-Mexico border when they were cut off by an SUV. After the cars collided, the attackers opened fire. The attackers have not been identified, and the Mexican embassy has not offered a motive for the attack, although the highway is known to be a risky area as it runs through territory disputed by gangs.

MEXICO: Genaro García Luna, former top security chief in Mexico is discussing the possibility of a plea agreement with federal prosecutors in New York. García Luna is charged with accepting millions of dollars worth in bribes from Joaquín “El Chapo” Guzmán, the convicted cartel leader from Sinaloa. U.S. prosecutors allege that he accepted these bribes to protect the cartel while he was serving as a lead official in the Felipe Calderón administration’s war on drugs. Plea negotiations began on Jan. 3, and the next court hearing is expected to take place on January 21.