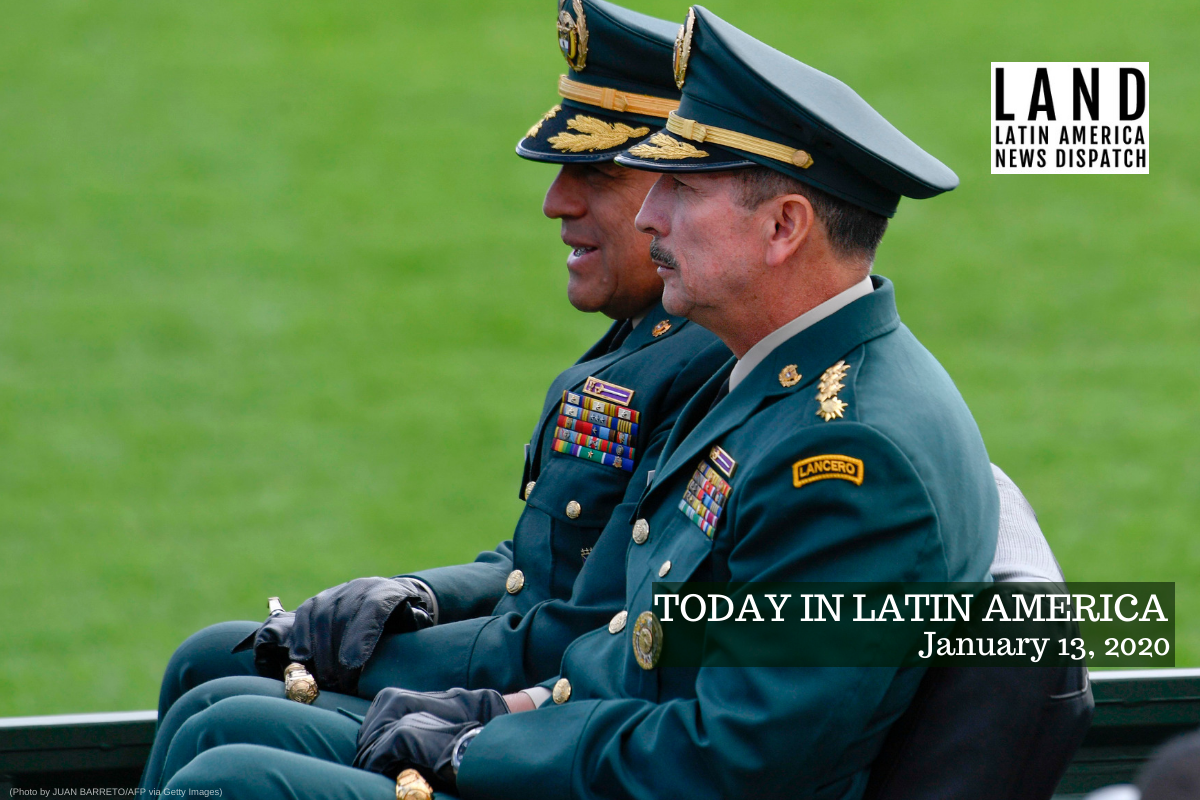 COLOMBIA: Colombian media revealed on Saturday that entire army units of military intelligence operated rogue with no accountability for most of 2019. Semana Magazine reported that military intelligence battalions utilized the latest technology to spy on judges, opposition politicians, journalists and other military officers. According to the investigation, reports of the illegal eavesdropping operations were directly handed off to senior politicians of the president’s Democratic Center party.

When authorities began to investigate, the army destroyed the evidence and began surveilling journalists. To conduct the investigation, Semana Magazine relied on secret documents, photographs, videos, and over a dozen direct sources. This military surveillance occurred under the command of Army Chief General Nicacio Martínez who resigned for “personal reasons” in December.

BRAZIL: President Jair Bolsonaro’s administration plans to send a bill to Congress by the end of the month to regulate mining on Indigenous reserves. According to Brazilian government officials, a lack of regulation has led to widespread illegal mining where Indigenous people receive no compensation. Government officials hope regulation formalizes extractive operations and benefits Indigenous communities with royalties.

COLOMBIA: Yesterday, authorities killed two gunmen who were planning to assassinate Rodrigo Londoño, leader of the FARC political party. According to government officials, an intelligence source informed police of the conspiracy and gave descriptions of the hitmen. At a checkpoint, the police exchanged gunfire and killed the two men, known by the aliases “Conejo” and “Kaleth.” Police say that the gunmen were sent by senior FARC dissident leaders from Venezuela. The FARC demobilized in 2017 to participate in Colombian politics, but a faction of its senior leadership have decided to take up arms again.

PUERTO RICO: The island is reeling from another 5.9-magnitude earthquake on Saturday. No injuries or deaths were reported, but the quake caused millions of dollars in damages along the southern coast. Puerto Ricans have been on high alert after multiple powerful aftershocks following Tuesday’s 6.5-magnitude earthquake. Governor Wanda Vázquez has estimated the damage since last week at $110 millions and is waiting for the United States to declare the situation a major disaster and free up additional resources for the battered island.

HAITI: Yesterday marked the 10-year anniversary of the magnitude-7 earthquake that killed roughly 220,000 people in 2010. The massive tremor, which lasted 30 seconds, destroyed Haiti’s major cities and left 1.5 million displaced. Many slums found in Haiti today still consist of earthquake victims who lost their homes in the 2010 quake. Although countries pledged over $10 billion in aid, the botched recovery effort forced many non-government organizations out of the country before those promises could be fulfilled.

EL SALVADOR: Salvadoran prosecutors issued an arrest warrant on Friday for the former head of Congress, Sigfrido Reyes. Attorney General Rual Melara charged Reyes and 14 other associates with laundering $6 million. On Twitter, Reyes said he was being politically persecuted. Reyes is a former member of the Farabundo Martí National Liberation Front, a guerrilla movement that transitioned into a political party after the country’s 1992 peace accords.

MEXICO: The National Guard and members of the Jalisco New Generation Cartel (CJNG) were involved in a shootout on Friday, which resulted in the arrest of eight members and the death of one of the cartel’s leaders. The CJNG blocked the Apatzingán-Aguililla road in Michoacán, leading army forces to open fire on the blockade. María Guadalupe López Esquivel, also known as “La Catrina,” was injured during the gunfire and died in hospital a few hours later. The 21-year-old had been implicated in extortion and assasination plots. The CJNG is considered Mexico’s “most dangerous and largest cartel.”

MEXICO: An 11-year-old student opened fire on students and teachers at a Coahuila school on Friday, killing one teacher. At least six others were injured and in hospital, according to Police Chief Maurilio Ochoa. The student died from a self-inflicted gunshot wound. Ochoa said the situation was “very serious” and authorities are concerned to “see a primary school student do something like this.” The school, Colegio Cervantes, participates in a nationwide “Safe Backpack” program that inspects students backpacks upon arrival.

UNITED STATES: The U.S. State Department will ban all charter flights to Cuban cities except for Havana, according to a press release issued Friday. The policy will give charters 60 days to stop operations and will further restrict the number of flights into the capital. Secretary of State Mike Pompeo said the decision was intended to further restrict the island’s revenue, which he says is used to “repress” the Cuban people and fund the “Venezuelan dictator” Nicolás Maduro. Cuban Foreign Minister Bruno Rodríguez said it was a “violation of human rights and the freedom to travel.” Commercial flights were banned in October.