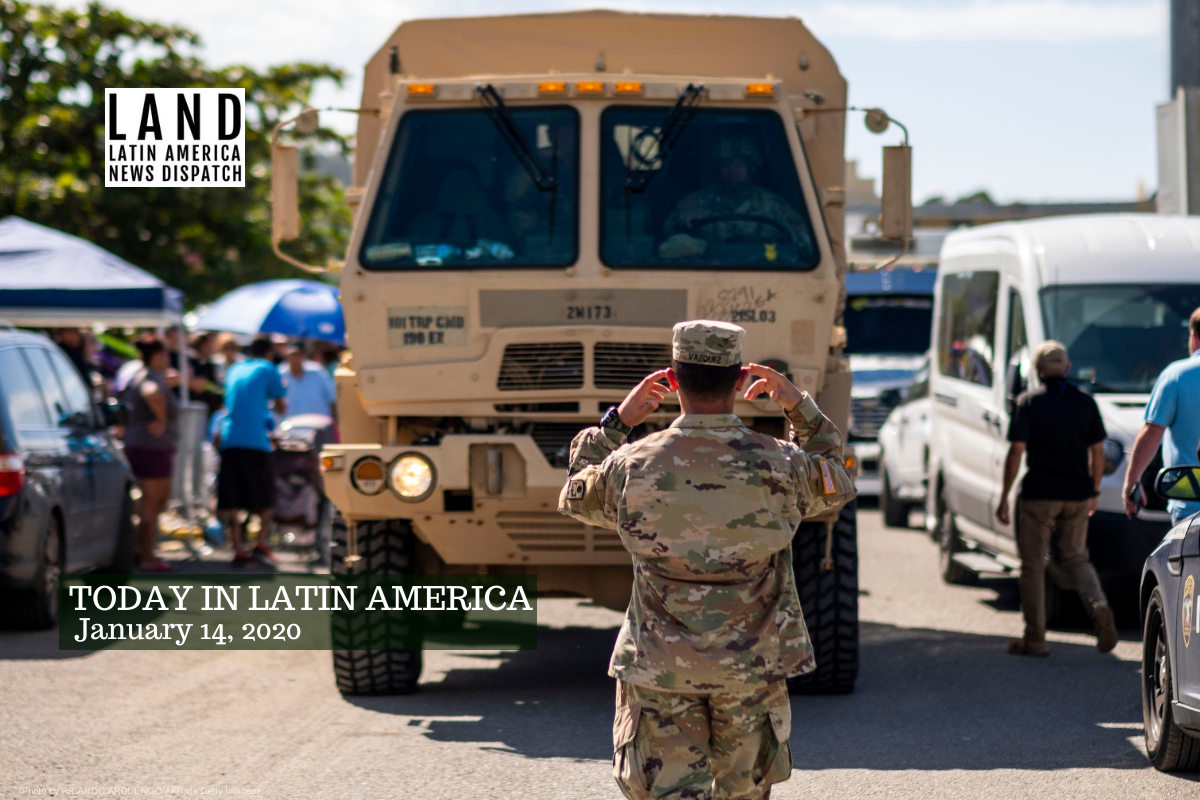 A Puerto Rico National Guard member guides a truck with supplies at a shelter in Guanica, Puerto Rico on January 12, 2020, after a powerful earthquake hit the island. (Photo by Ricardo Arduengo/AFP via Getty Images)

PUERTO RICO: A former emergency management director told the Associated Press that emergency protocols were not followed after signs of the first earthquakes, raising concerns about the country’s disaster preparedness after Hurricane María. Nazario Lugo, who is also the current president of Puerto Rico’s Association of Emergency Managers, said the government chose not to act “until they were up to their neck in water.” Emergency Management Director Carlos Acevedo had previously acknowledged that the government had not yet completed an emergency plan for earthquakes. Since the aftermath of Hurricane María, scientists have warned that the island lacks proper attention and warning systems for such “physical threats.”

Puerto Rico is still grappling with devastation from the earthquake last week and subsequent aftershocks, including a 5.9-magnitude quake on Saturday. The electricity is back on for most of the island, but Puerto Rico’s public utility is still asking residents to conserve energy.

BRAZIL: As soon “The Edge of Democracy” was announced as a nomination for best documentary feature in the Academy Awards yesterday, leftists and right-wingers engaged in an online feud, making “Vertigem” —the Portuguese title— a trending topic on Twitter. Directed by Petra Costa, the film is about the events that led to the impeachment of former President Dilma Rousseff, of the Workers’ Party, and the rise of far-right President Jair Bolsonaro. In a statement, Rousseff, who has claimed she was ousted in a “political coup,” congratulated the filmmaker and said that “the truth is not buried.” Roberto Alvim, Bolsonaro’s special secretary of culture, said “The Edge of Democracy” is a “fiction story.”

VENEZUELA: The prices of products and services in Venezuela registered an inflation rate of 7,374.4 percent last year, according to the Finances Commission of the Venezuela’s National Assembly. The number is better than 2018, when the rate hit 1,698,488 percent, but it is still considered hyperinflation, defined when the monthly rate is higher than 50 percent. Representative Ángel Alvarado, a member of the finance commission, said the rate’s slowdown was caused by government measures to control the amount of cash in hand, but the country is still on “a path of high inflation.”

COLOMBIA: After Uber revealed it will depart from Colombia on February 1, President Iván Duque said the company was not following the country’s rules. “While some work paying quotas, insurance and inspections, others are competing without following these norms,” he said, referring to the argument used by taxi drivers’ unions. In December, Colombia ordered Uber’s immediate shut down due to competition with taxis. The company said they will appeal the decision and challenge it in the International Center for Settlement of Investment Disputes of the World Bank. Uber is said to have 2 million users in Colombia and 88,000 drivers.

CUBA: In the first public challenge to the Cuban government by a member of the judiciary, a former high-ranking judge released documents to the New York Times yesterday that show high incarceration rates, illegal detentions and a lack of due process in Cuba’s judicial system. Former judge Edel González Jiménez and Javier Larrondo, an activist with the organization Prisoners Defenders, made a public statement in Madrid yesterday, hoping to spur the Cuban government into change. The documents show a 92 percent conviction rate, primarily towards young, black men, as well as the prosecution of “antisocial” crimes to criminalize unemployment, public disorder and a lack of support for the government. González also accused state security forces of fabricating crimes against political opponents.

PANAMA: The Panama Canal Authority will begin to collect a $10,000 freshwat er surcharge from ships, in light of an extreme scarcity of freshwater and drought in the area. The surcharge starts on Feb. 15 and applies to ships larger than 125 feet. Canal administrator Ricaurte Vásquez said the fee would ensure the “reliability of the route” and provide resources for human consumption in Panama City, as ships passing through utilize millions of gallons of freshwater. Rainfall in the area is at its lowest in years, at 20 percent below average.

MEXICO: A lawsuit from 2015 that alleged inhumane and unsanitary conditions in eight Arizona Border Patrol facilities went to trial yesterday in Tucson. The lawsuit claims immigrants are forced to withstand squalid and freezing cells for long periods of time. Even though a court injunction from 2016 required the Tucson sector to provide clean mats and blankets to immigrants held more than 12 hours, advocates say the Border Patrol has not improved migrants’ circumstances. Nearly 852,000 people were apprehended in 2018, and many were families with children.

MEXICO: A monument will be raised in memory of the nine U.S.-Mexican dual-citizen families who were ambushed and killed by suspected cartel gunmen in November, said President Andrés Manuel López Obrador. The victims —three women and six children— were part of a Mormon community that calls the town of La Mora, in Sonora, home. The town is also a contested drug gang territory, with the Sinaloa cartel controlling Sonora and the Juárez cartel in neighboring Chihuahua. López Obrador said the first goal is to bring those responsible to justice.

MEXICO: After Sinaloa cartel kingpin Joaquín “El Chapo” Guzmán was sentenced to life in prison last year, a recent report from the Drug Enforcement Administration said the Jalisco New Generation cartel or CJNG has displaced the Sinaloa cartel in Chicago. The DEA found that CJNG, led by Nemesio Oseguera, known as “El Mencho,” is the Mexican drug gang that has accrued the most power over the past two years. The underbelly of the cartel’s rapid rise is the seemingly unending demand for methamphetamines, heroin, cocaine and fentanyl within the United States.