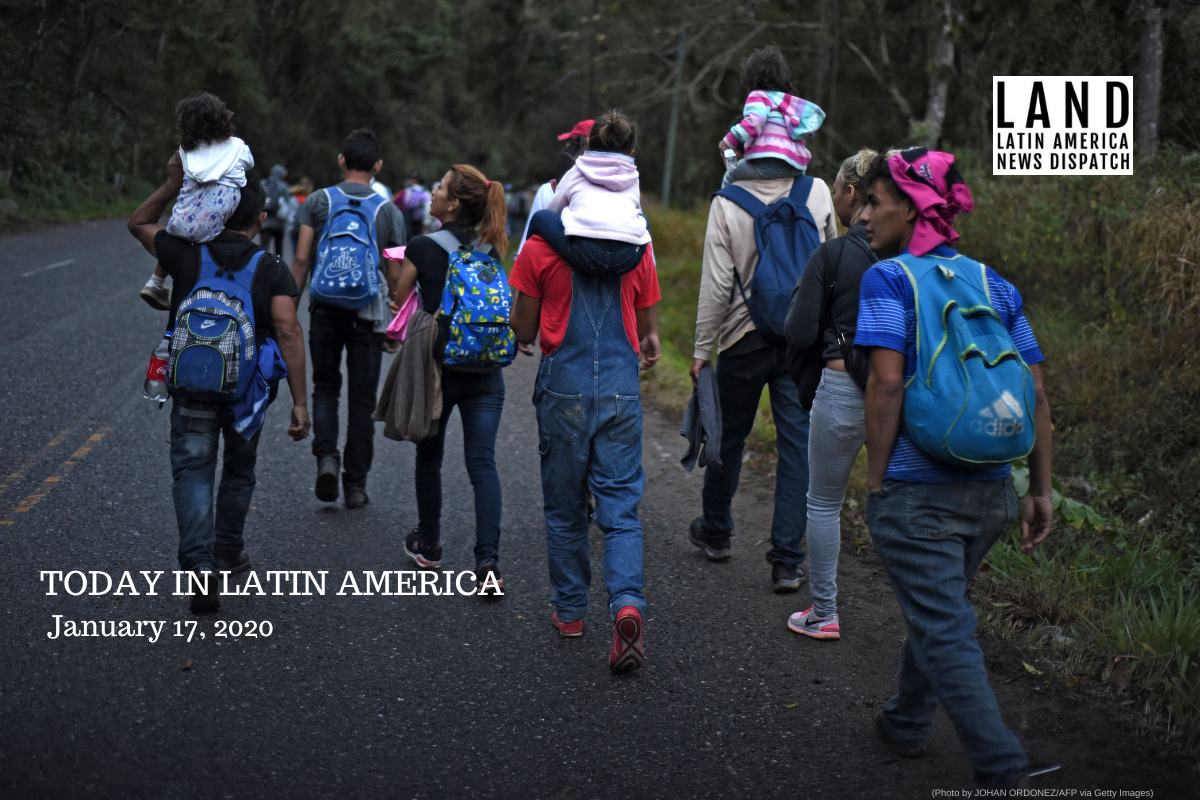 Honduran migrants walk in a caravan heading to the US, near Quezaltepeque, Chiquimula departament, Guatemala, on January 17, 2020. (Photo by JOHAN ORDONEZ/AFP via Getty Images)

UNITED STATES: The American Civil Liberties Union and other civil rights groups are suing the Trump administration on behalf of six asylum seekers for its agreements with Guatemala, El Salvador and Honduras that allows the Trump administration to send migrants seeking asylum in the United States back to Central America. The lawsuit asks for a federal judge to block the Department of Homeland Security from implementing the agreement.

“While we cannot comment on litigation, the U.S. Government and the Government of Guatemala remain committed to the asylum cooperative agreement and stand behind the integrity of the program,” said Homeland Security spokeswoman Heather Swift.

The United States has received much backlash on its current stance because it “violates the historic role of the U.S. as a humanitarian nation.”

ARGENTINA: By the end of 2019, Argentina’s inflation hit its highest level in three decades at 53.8 percent. The cost of living increased by 3.7 percent in just the month of December, with the cost of food up 62 percent. Since the recession began 18 months ago, poverty levels have risen, with recent reports putting it at near 40 percent with around 16 million Argentines living below the poverty line. The country’s inflation rate is one of the highest in Latin America, second only to Venezuela. The new Peronist administration led by President Alberto Fernández has promised to combat inflation through price controls.

BRAZIL: The Olympic Park in Rio de Janeiro was ordered closed on Wednesday by a judge who cited a lack of safety licenses. City authorities did not provide safety guarantees for the Olympic Park to hold public events. The venue has previously been used to host Olympic games like basketball, swimming and tennis, and more recently has been used for concerts. Local media outlets published photos of the park showing missing manhole covers and unkempt pathways. According to the judge, the park was “ready for tragedies.” The federal government said in a statement that the venue’s safety certificates were valid until March 2020 and that it would appeal the judge’s decision.

BOLIVIA: The Foreign Ministry of Bolivia is pressuring Argentina to reject former President Evo Morales’ recent comments calling for “armed militias” in Bolivia. Morales clarified his statements, saying that he does not want people to arm themselves with guns. Morales is currently living in exile in Buenos Aires, where the new Peronist government has offered him asylum. Argentina’s foreign ministry issued a statement saying that it does not recognize the interim government in Bolivia and that it waits for “transparent elections to recognize the next government of Bolivia.”

BARBADOS: The European Union will provide the Caribbean Public Health Agency (CARPHA) with a $4.1 million grant to combat mosquito-borne diseases in the region. The grant funding will be used to create a four-year health plan to detect, control, and prevent outbreaks of Zika, dengue fever and other mosquito-borne illnesses. The executive director of CARPHA, Dr. Joy St. John, said she was grateful to the European Union and that the “agency will implement this very important initiative.”

JAMAICA: The island’s government is taking businesses that haven’t adhered to the ban on single-use plastics and styrofoam products to court. The Minister of Economic Growth and Job Creation Daryl Vaz said that although the ban has received overwhelming support, 30 businesses will face court soon and six businesses have already been fined.

COSTA RICA: The largest structural fire since 2016 destroyed approximately 150 buildings and the homes of at least 530 people in Guarari. No deaths have been reported so far but nearly three dozen people were affected by the fire and five were transported to hospitals for further care. Officials haven’t yet disclosed the cause of the fire.

UNITED STATES/MEXICO: Yesterday, the U.S. Senate approved the U.S.-Mexico-Canada free trade agreement, designed by President Donald Trump to replace the North American Free Trade Agreement. The senate voted 89-10 in favor of the USMCA, a notable victory for Trump as the Senate begins his impeachment trial. Mexico has already agreed to the USMCA, and Canada is expected to join onto the agreement now that the United States has done so.

UNITED STATES: Prosecutors in the U.S. Virgin Islands filed a lawsuit yesterday alleging that Jeffrey Epstein trafficked and abused girls from two private islands in the territory. The lawsuit states that between 2001 and 2018, Epstein flew girls between the ages of 12 and 17 to his property on Little St. James island and purchased the neighboring Great St. James island to conceal his activities. The lawsuit would confiscate hundreds of millions from Epstein’s estate, which is controlled by a trust in the Virgin Islands.

MEXICO: Liga MX has suspended Mexico and Monterrey defender Jesús Gallardo for using a homophobic slur during post-game celebrations last month. After his team defeated Club América, Gallardo was caught on camera singing an anti-gay chant. He has been suspended from the first two games of the 2020 Clausura and asked to pay a fine for his behavior.