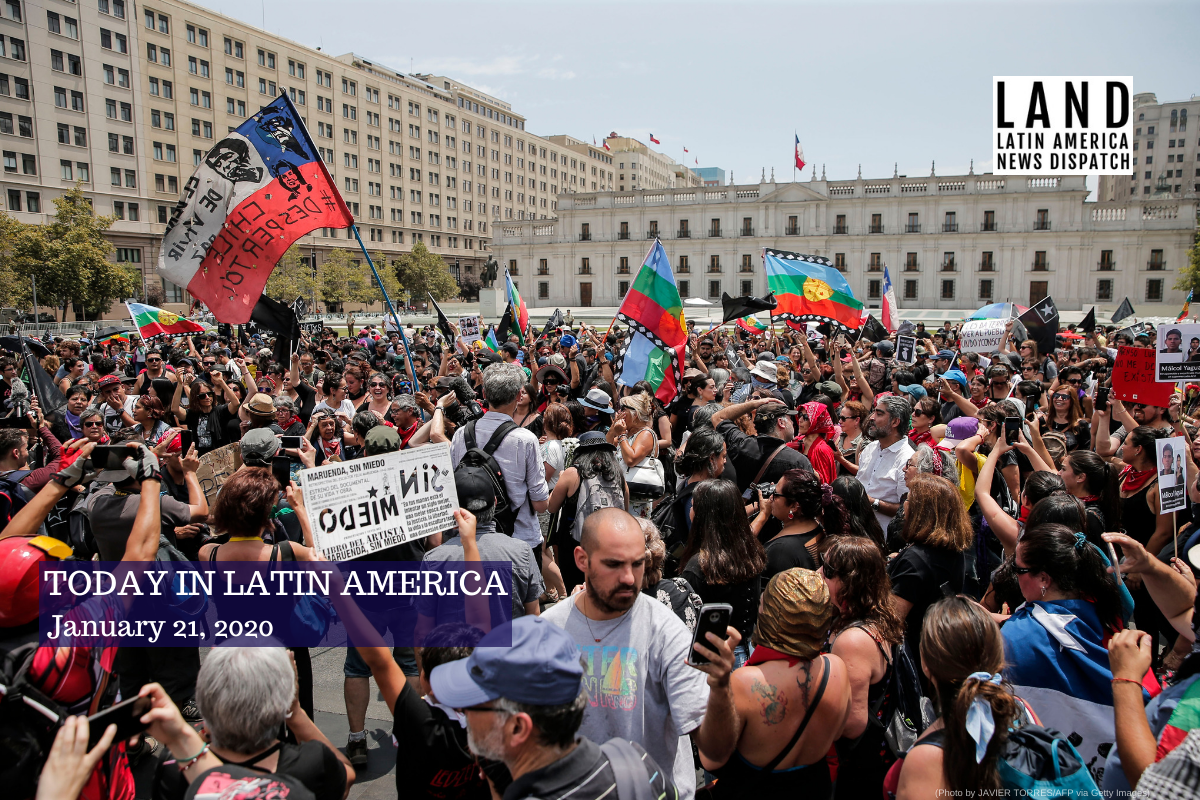 People demonstrate in front of La Moneda presidential palace in Santiago, on January 18, 2020, to protest against the Chilean government. (Photo by Javier Torres/AFP via Getty Images)

UNITED STATES: The New York Times reported yesterday that the Department of State has linked Russian Twitter accounts to protests across Latin America in fall 2019. Senior diplomats from the U.S. believe that Russia’s goal may be to foment dissent in states that do not support Maduro’s presidency in Venezuela. However, State Department officials consider the majority of posts on social media related to the protests to be legitimate.

The State Department found that in Chile almost 10 percent of all tweets supporting the October protests originated from accounts linked to Russia, whereas in Bolivia, the number of tweets from Russian-linked accounts increased to more than 1,000 a day after Evo Morales resigned

“We are noting a thumb on the scales,” Deputy Assistant Secretary of State for Western Hemisphere Affairs Kevin O’Reilly told The New York Times. However, others have attributed this year’s widespread protests to other sources, including frustration with neoliberalism.

BRAZIL: At least 26 prisoners escaped from a facility in northern Brazil yesterday, just one day after other 75 broke out of a prison in Paraguay. In the latest case, in Rio Branco, Acre, the inmates dug a hole in the cell’s wall and used sheets to scale the prison’s outer wall. One was recaptured. The Brazilian newspaper O Globo says the 26 are members of the First Capital Command, Brazil’s most dangerous criminal organization. The day before, another 75 members of the same organization organized what was called “a prison break without precedent” by Paraguay’s Justice Minister Cecilia Pérez. Police recaptured two of the Paraguayan inmates.

CHILE: An International Monetary Fund report released yesterday found that the protests across Chile that began in October 2019 caused a “sizable markdown” in the country’s growth forecast. The report states that changes to the Chilean economy affected Latin America’s overall growth forecast. The region is expected to grow 1.6 percent in 2020 and 2.3 percent in 2021, 0.2 percent and 0.1 percent less than previously projected. Chile’s Economy Minister Lucas Palacios said the country’s growth expectation is “only 1.2 percent.” He said that even though Chile is one of the most open countries to foreign investments, Chileans are not “taking advantage of the international economic bonanza.” The global growth projection rose from an estimated 2.9 percent in 2019 to 3.3 percent in 2020.

VENEZUELA: Juan Guaidó, speaking from Colombia, said his opponent Nicolás Maduro is a promoter of terrorism. Guaidó is approaching his first anniversary as self-proclaimed President of Venezuela. He is visiting President Iván Duque and U.S. Secretary of State Mike Pompeo in Colombia. Venezuela’s Supreme Court has banned Guaidó from traveling internationally, so he could be sent to prison upon his return to the country. Now, he plans to travel to the World Economic Forum in Davos, Switzerland, and urge international leaders to force Maduro from office.

GUATEMALA:  A caravan of hundreds of Central American migrants attempted to enter Mexico by walking across the Suchiate River yesterday, after officials said they would not be granted passage across the bridge. The Mexican National Guard deployed tear gas on people crossing the river. More than 100 migrants were detained. In a letter, Mexico’s immigration agency reiterated that the migrants would be allowed to enter “in orderly fashion,” but that they should not expect free passage into the country. On Sunday, migrants rushed the bridge across the Suchiate at the Guatemala-Mexico border.

EL SALVADOR: Yesterday, the Specialized Women’s Court began proceedings against Mario Huezo, a man accused of the femicide of Salvadoran journalist Karla Turcios. Prosecutors introduced a list of more than 40 witnesses in the case, 28 of whom have agreed to testify against Huezo during this week. The prosecutor’s office stated that it will be seeking the maximum penalty of 50 years in jail for Huezo. Turcios was killed in April of 2018 after Huezo allegedly choked her in her sleep and left her body on the side of a highway in the municipality of Santa Ana.

PUERTO RICO: Hundreds of Puerto Ricans demonstrated in front of Governor Wanda Vázquez’s mansion yesterday, following the discovery of apparently “forgotten” disaster supplies in an abandoned warehouse. They demanded her resignation. The protests come after Vázquez fired three high-ranking officials in her administration, including emergency management director Carlos Acevedo. Vázquez said that the firings were due to a “lack of confidence” in her administration after the warehouse with disaster supplies was discovered. Demonstrators at the scene vowed to remain in the streets until Vázquez agrees to step down.

UNITED STATES-GUYANA: Yesterday, Guyana debuted as a world oil exporter by sending a vessel carrying about 1 million barrels of crude to the United States. The cargo ship, operated by U.S. oil firm Exxon Mobil, departed from the floating platform Liza Destiny off the coast of Guyana. Oil production began in December at the offshore Stabroek block, where the country’s major oil resources have been found to date. In total, Exxon and its partners have disclosed 15 oil discoveries in Guyana. Exxon alone expects to produce at least 750,000 barrels of crude per day by 2025, enough for Guyana to become an oil power like its neighbors, Venezuela and Brazil.

MEXICO: The Legion of Christ religious order announced yesterday that it would conduct a joint investigation with the Vatican into the case of Fernando Martínez Suárez. Also on Monday, the Associated Press released an investigation into the case. Martínez Suárez admitted to sexually abusing at least eight girls between 1990 and 1993 while he was a priest with the Mexican religious order. Some of his victims were as young as six years old. The Vatican has stated that all leaders involved in the case would participate in the investigation. Critics remain skeptical, referencing Cardinal Velasio De Paolis, who was the papal envoy assigned to the Legion and learned of the abuse in 2010 but refused to punish Martínez Suárez.