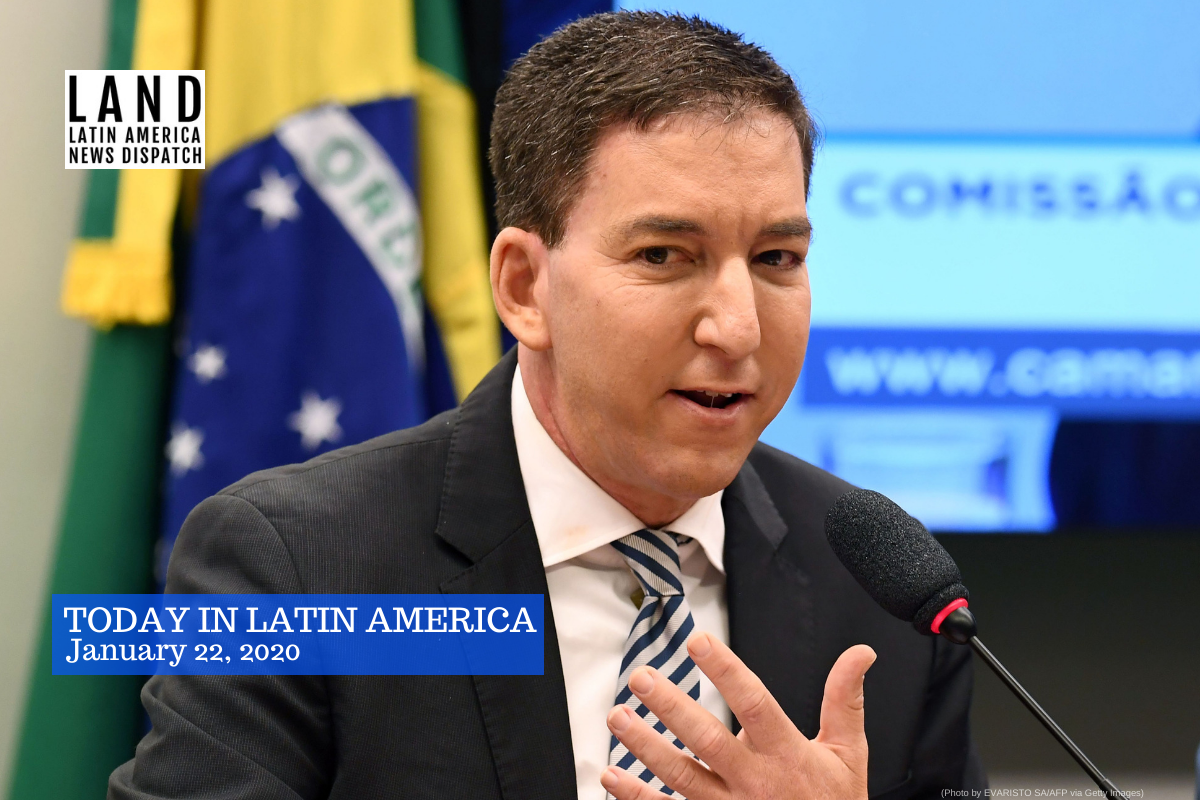 U.S. journalist Glenn Greenwald, founder and editor of The Intercept speaks during a hearing at the Lower House's Human Rights Commission in Brasilia, Brazil, on June 25, 2019. (Photo by EVARISTO SA/AFP via Getty Images)

BRAZIL: Brazilian prosecutors denounced U.S. journalist Glenn Greenwald yesterday, accusing him of participating in phone hacks of authorities tied to the corruption investigation of former President Luis Inácio Lula da Silva. Greenwald published excerpts of conversations involving Justice Minister Sérgio Moro, who led the “Car Wash” probe. The excerpts showed that Moro coordinated with prosecutors during the investigation. Prosecutors did not bring any formal charges against Greenwald, and federal police in Brazil said they found no wrongdoing on Greenwald’s part.

Greenwald is most well-known for his work directing the Pulitzer Prize-winning investigations “The NSA Files,” based on documents leaked by Edward Snowden. He currently reports for The Intercept and The Intercept Brasil. He responded to yesterday’s accusations by accusing President Jair Bolsonaro and his government of “silencing journalists.”

BRAZIL: Prosecutors filed charges of intentional homicide and environmental crimes against the mining company Vale for its role in the Minas Gerais dam collapse last January. Prosecutors also charged the German company Tuv Sud, which audited Vale, and 16 individuals in connection with the disaster that killed more than 250 people on Jan. 25, 2019. Prosecutors argue that Vale ignored warnings of the dam’s instability, which allowed it to collapse, destroying the town of Brumadinho and filling the Paraopeba River with heavy metals.

VENEZUELA: Police officers surrounded Juan Guaidó’s offices yesterday, closing the building while Guaidó is abroad building support for his opposition movement. Officers from two elite units loyal to President Nicolás Maduro blocked the building’s entrances, but it was unclear whether they had entered Guaidó’s office. Opposition lawmakers gathered outside told the Associated Press that they expected the police presence was part of an illegal raid. Just hours earlier, opposition legislators held an informal National Assembly session outside in a public square after they were blocked from entering the country’s congress.

PANAMA: Authorities in Panama took the first steps yesterday to dig up the remains of civilians killed during the 1989 U.S. invasion of the Central American country. The exhumation follows the efforts of Panamanians whose relatives died or disappeared 30 years ago. Officials gave approval to exhume 19 bodies buried in Jardín de Paz cemetery, located in Panama City. The move comes after the reopening of investigations into the killing of civilians during the Dec. 20, 1989, invasion.

CUBA: The Trump administration is pressuring Latin American allies to cancel their health cooperation agreements with Cuba and send Cuban doctors back to the Caribbean island. At the moment, at least four Latin American countries have done so, reflecting the region’s conservative backlash to leftist governments. U. S. Secretary of State Mike Pompeo has called the program a form of slavery and human trafficking. Cuba’s program, a key source of income for the country, has sent 400,000 doctors to 164 countries since 1960.

MEXICO: Butterfly conservationist Homero Gómez González has disappeared from the monarch butterfly sanctuary in western Michoacán, where he works, causing fears that he may have been targeted for his work. He was last seen on Jan. 13. The human rights commision in Michoacán has raised concerns that illegal loggers are behind the disappearance and have asked the attorney general’s office to investigate. Monarch butterflies have been displaced from areas of the forest damaged in recent years by illegal logging, but conservationists like Gómez González have helped restore much of the land. A commission official said that Gómez González “was probably hurting the (business) interests of people illegally logging in the area.”

MEXICO: Genaro García Luna, the former top Mexican security official charged with accepting tens of millions of dollars in bribes from Joaquín “El Chapo” Guzmán, will not take a plea deal in his federal trial. His attorney, César de Castro, has said that he is “very much looking forward” to taking the case to trial and defending the charges against him. Prosecutors say that García Luna allowed the Sinaloa cartel to operate with impunity in the country in exchange for bribes, sometimes coming in briefcases full of cash. The Mexican government recently froze García Luna’s bank accounts and has denied appeals by his family members to access the money.

UNITED STATES: The United States deported a 23-year-old Honduran mother and her two sick children to Guatemala. Both children, ages 1 and 6, had been hospitalized in McAllen, Texas, and monitored by the government to ensure they could be deported. They received medical clearance from a nurse who certified they were able to travel. Lawyers for the family asked a federal judge to prevent the deportation, saying that the children were not in a condition to be sent to Guatemala, but their request was denied. Their deportation comes under a new “Asylum Cooperative Agreement,” which sends asylum seekers at the U.S. border to Guatemala to seek asylum in that country.