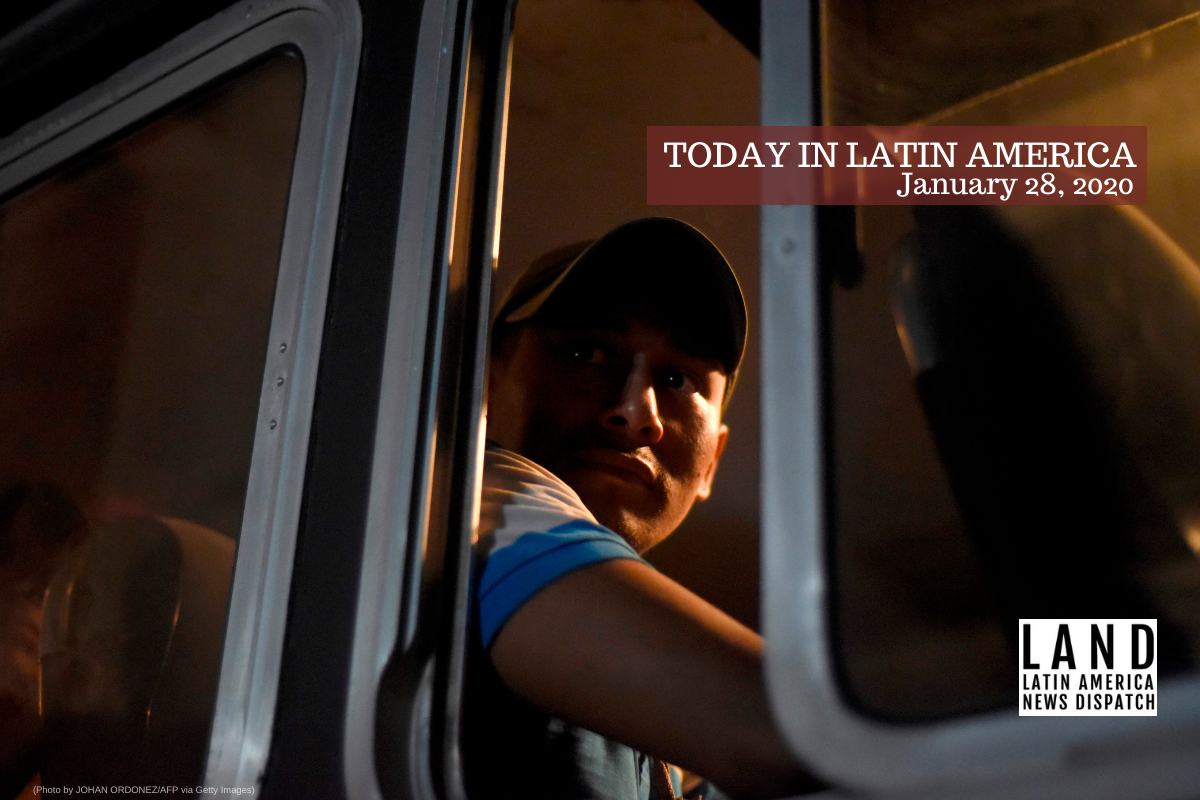 A young man looks out of a bus window as Honduran migrants board a bus to voluntarily return to their country after remaining for several days in Tecun Uman, Guatemala, on the Guatemala-Mexico border, on January 21, 2020. (Photo by JOHAN ORDONEZ/AFP via Getty Images)

HONDURAS: The Mexican National Migration Institute deported 240 Hondurans in two planes departing from Toluca on Monday. This comes after a caravan of mostly Honduran migrants failed to advance past the Mexico-Guatemala border last week. The caravan began in San Pedro Sula, Honduras and numbered approximately 4,000 people when it reached the border. The majority of the migrants were detained but an unknown number evaded Mexican authorities and continued traveling north. Now, Mexican authorities say that more than 5,000 Hondurans have returned to the country in January alone. Some decided to return on their own, while Mexico has deported others by bus and plane. As many as four planes of deportees a day have departed Mexico for Honduras. When the caravan began, on January 15, Hondurans told reporters there is “little difference if you die here or there.”

BRAZIL: As of Monday, at least 54 people have been killed and 30,000 displaced by the torrential rainfall of the past few days. Another 18 people were reported missing in the floods and landslides that have submerged entire neighborhoods. Authorities have evacuated between 6,000 and 15,000 people from the states of Minas Gerais, Espírito Santo and Rio de Janeiro. Nearly seven inches of rain fell on Belo Horizonte in the 24-hour period from Thursday to Friday, the most registered in 110 years.

VENEZUELA: Venezuelan President Nicolás Maduro’s top government lawyer hired a Washington D.C. lobbying firm, according to Justice Department documents released yesterday. Inspector General Reinaldo Muñoz hired Robert Stryk’s Sonoran Policy Group as part of a deal with Foley & Lardner to represent Maduro’s interests in the U.S. Stryk will reportedly be paid $2 million as part of the contract to garner support for the Maduro regime. Stryk has represented other controversial figures and governments like Isabel dos Santos and the government of the Democratic Republic of Congo, according to the Associated Press.

COLOMBIA: Autopsy photos leaked to the media of two former FARC members killed by security forces raised doubts yesterday of the Colombian government’s narrative that the men had been planning an assassination attempt. On January 12, General Oscar Atehortua announced the deaths of two former FARC guerrillas in a shootout when police intercepted them. Police alleged that they were on their way to assassinate Rodrigo Londoño, the FARC party political leader. But the photos indicated possible signs of torture. The bodies also appeared to be in different states of decomposition, indicating different times of death. According to the UN, at least 77 demobilized FARC combatants were murdered in 2019.

JAMAICA: Jamaican Prime Minister Andrew Holness said the government may begin paying ministers based on their performance “in order to get the public sector to move much quicker in achieving the objectives of policy.” In the speech made during a meeting of the Ministry of Economic Growth and Job Creation in Kingston last Thursday, Holness said that by copying the private sector, he hopes to enhance efficiency. He said the government is still studying how to make the new system work, but it will be undertaken gradually “so that individuals can see that it is working and buy into the concept.”

NICARAGUA: Police confiscated more than $1 million of drug money during a weekend operation, according to Nicaraguan authorities. The police commissioner told journalists that officers stopped a sedan that was driving in Ocotal, a city about 15 miles from the border of Honduras. They found 51 bundles of tape-wrapped cash hidden inside the car’s doors. Authorities discovered traces of cocaine in the money bills and on the driver and passenger. They were arrested and will face charges of organized crime and money laundering. Drugs are trafficked from South America through Nicaragua to reach U.S. and European markets.

UNITED STATES: The U.S. Supreme Court lifted a preliminary injunction on the Trump Administration’s so-called “public charge” rule yesterday. The rule would make it easier to deny legal status to immigrants who are likely to use social programs such as Medicaid or food assistance. Several federal judges blocked enforcement of the policy last fall, though the ban from a New York district court was the only one to outlast appeals. Yesterday’s ruling overturned that injunction, allowing the government to begin implementing the rule while lawyers continue to debate it in lower courts. The justices split along ideological lines, with a 5-4 majority. Advocates worry that the policy will discourage people from using services, and have urged immigrants to ask legal experts if they are concerned the rule with impact them.

UNITED STATES: Former New York City mayor and current presidential candidate Michael Bloomberg announced his support for Puerto Rican statehood yesterday, promising to promote a bill “subject to approval by the people of Puerto Rico.” Most of the Democrats vying for this year’s nomination have said they would let Puerto Ricans decide whether to become the 51st state. Andrew Yang, John Delaney, and now Bloomberg have said they would promote statehood, while Joe Biden has yet to take a clear position. Bloomberg’s campaign also released a plan to conduct an independent audit of the debt-restructuring plan imposed by a board of presidentially-appointed managers and promised to free up disaster aid as well as social funding to Puerto Rico. The announcements came a day after Bloomberg was campaigning in Florida.

U.S.-MEXICO BORDER: An insurance company released a new plan for drivers from the United States who visit Mexico for health care. The group Patients beyond Borders estimates that 300,000 “medical tourists” travel from the U.S. to Mexico each year. Since January of last year, the Mexican government has required drivers from the U.S. and Canada to obtain auto insurance from a Mexican company. The Arizona couple behind the new coverage designed it to include auto liability as well as medical evacuation insurance.