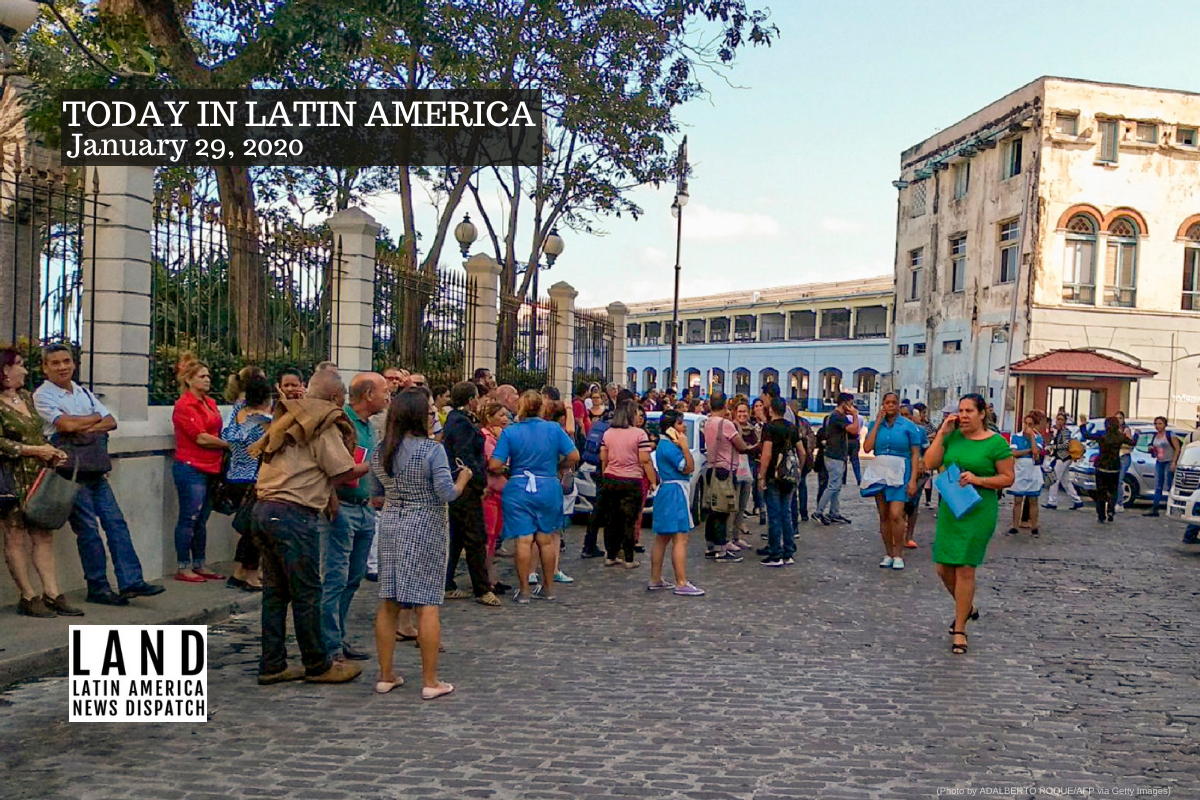 Workers leave the building of the Lonja del Comercio (Commerce Market) building after a quake in Havana on January 28, 2020. (Photo by ADALBERTO ROQUE/AFP via Getty Images)

JAMAICA: A 7.7 magnitude earthquake rocked the Caribbean Sea between Cuba and Jamaica. Aftershocks of the Tuesday earthquake reached as far as Mexico and Florida and caused evacuations across the region. The USGS recorded the quake at 2:10pm, running 6 miles deep and resulting in 6.1 magnitude aftershocks in surrounding regions, including Grand Cayman Island and the Yucatan Peninsula. Cuba, the Bahamas, Haiti and Honduras were also affected. No injuries or heavy damage have been reported. Officials announced no threat of future tsunamis.

The last month has been extremely active for earthquakes in the Caribbean, including the recent 6.4 magnitude earthquake in Puerto Rico. Geophysicists attribute the activity to movement on the “Oriente Fault,” which runs just south of Cuba, but say that Puerto Rico’s earthquakes are unrelated to this most recent earthquake. This is the fourth magnitude 7 or greater quake in the Caribbean since 2000.

ARGENTINA: The FIFA Foundation named former President Mauricio Macri as its new executive chairman on Tuesday, to the concern of many in his home country. The Argentinian Football Association published a press release, stating the appointment was a “surprise,” and “inappropriate.” Gianni Infantino, FIFA President, said Macri “has the ideal profile to lead this project, which wants to put football at the service of society.” Macri served as Argentina’s president from 2016 to 2019. He also is a former President of Buenos Aires’ Boca Juniors club and received FIFA’s “Living Football Award” last June.

CHILE: The Government announced a state of emergency in five states due to torrential rains and flooding, which have killed one person and damaged homes across the country. At least two people are reported missing. President Sebastián Piñera and Interior Minister Gonzalo Blumel arrived in northern Chile on Tuesday to coordinate resources for the victims and begin flood prevention in at-risk areas. Intense rains have already caused the Copiapó, Huasco and Salado rivers to flood surrounding regions, and the rain will continue through the week.

COLOMBIA: The Colombian Ministry of Justice is seeking the extradition of senator Aida Merlano from Venezuela. Colombian officials will only work with opposition leader Juan Guaidó, who they recognize as interim president, and refuse to discuss the matter with current President Nicolás Maduro. In a radio interview, Colombian Foreign Minister Claudia Blum said that despite the complications of the case, Colombia will “fight to restore Venezuela’s democracy.” Merlano escaped prison in October after being charged with overseeing a vote-buying operation and sentenced to 15 years in prison.

GUYANA: ExxonMobil made its 16th oil discovery off the Guyanese coast, uncovering 8 billion barrels of crude oil on the Stabroek Block. The 6.6 million-acre Stabroek Block is the largest crude oil discovery in recent years. Four drillships continue to explore the country for new resources, and a fifth drillship is expected to be deployed later this year.

EL SALVADOR: Prosecutors in El Salvador have accused Rep. Norman Quijano of electoral fraud and conspiracy, and asked Congress to lift his immunity. The prosecutors allege that Quijano was involved in “secret talks with street gangs seeking to influence the 2014 presidential election,” based on videos of Quijano meeting with gang members. Quijano, the former president of the unicameral Legislative Assembly, denies the allegations. If the immunity from prosecution is lifted, Mr. Quijano could face charges of electoral fraud and conspiracy.

CANADA: The CEO of the Bank of Nova Scotia, Canada’s third largest lender, published an op-ed on Tuesday supporting Venezuelan opposition leader Juan Guaidó. Brian Porter said in his National Post essay that “Venezuela’s democracy, economy and society have collapsed in recent years, in that order.” The Bank of Nova Scotia has invested millions of dollars in Venezuela since 1997 and reports losses under the “socialist regimes.” In 2014, the institution suffered a $98 million write-down on its investments. Juan Guaidó was recently garnering diplomatic support in Canada where he met with Prime Minister Justin Trudeau.

MEXICO: A soldier was killed and a general wounded in a gunfight with narco-traffickers on Monday in the Caribbean state of Quintana Roo. The military carried out a pre-dawn operation to intercept a drug plane landing on a road near the lagoon resort of Bacalar. When security forces arrived at the improvised runway, cartel gunman opened fire with assault rifles and .50 caliber armament. The general and two other injured soldiers are now in stable condition.

UNITED STATES: Mexico’s Foreign Minister arrived in Washington DC on Tuesday for the signing ceremony of the U.S.-Mexico-Canada Agreement (USMCA). Marcelo Ebrard will join Trump today to sign a revised North American Free Trade Agreement (NAFTA). The agreement changes trade rules to closely regulate the automotive, steel and dairy industries. The USMCA got overwhelming bipartisan support in Congress. Canada has yet to ratify the USMCA.