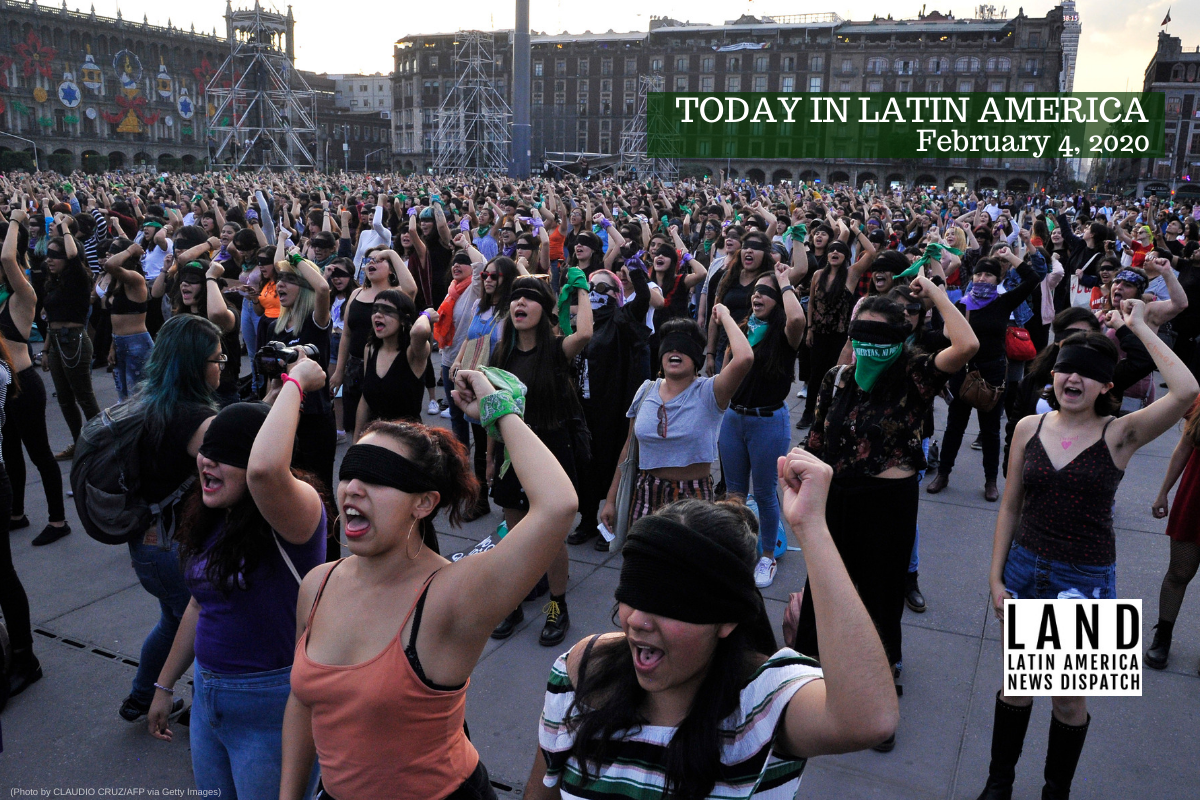 Women recreate a feminist choreographed performance originated in Chile which became viral against gender violence and patriarchy at the Zocalo square in Mexico City, on November 29, 2019. (Photo by CLAUDIO CRUZ/AFP via Getty Images)

MEXICO: The increase in crime rates in 2019 disproportionately affected women, according to new statistics from the Executive Secretariat of the National Public Security System (SESNP). The number of female victims increased by 2.5% from 2018. The SESNP documented more than 70,000 cases of crimes against women, including manslaughter, homicide, kidnapping and extortion. The most common crime was “malicious injuries.” In response, gender specialists have said current public policies are inadequate. Alicia Elena Pérez Duarte, a researcher with the National Autonomous University of Mexico (UNAM), told El Universal that “as long as we do not address the underlying problem, which is respect for women, we will not end this situation.”

BRAZIL: Brazilians in China begged President Jair Bolsonaro to evacuate them from China, where the coronavirus outbreak has claimed the lives of 361 people. Brazilians living in Wuhan, ground zero of the deadly virus, posted a Youtube video on Sunday begging the government to evacuate them. Brazil’s foreign minister, Ernesto Araújo, cited legal obstacles for the delay in evacuating its citizens trapped in the city-wide lockdown. Countries like the United States, Mexico, Colombia, the United Kingdom, Japan and Italy have already taken steps to evacuate citizens.

CHILE: Protests surged in Chile over the weekend after the death of civilians at the hands of security forces. The death of José Mora, who was run over by a police truck on Wednesday, started the resurgence of unrest. Police stations were attacked 20 times and 124 protestors were arrested on Friday and Saturday. At least 46 police officers and 30 government officials have been injured since Saturday. Five people died, including a protester who died in a fire and another who was shot in the head by security forces. Protests against the government of President Sebastian Piñera started in October 2019 after a subway fare hike.

Morales accused the interim government on Twitter of sabotaging his attempt to run for congress because Hermosa carried the former president’s legal documents necessary to run for office. Former President of the Supreme Electoral Tribunal Maria Eugenia Choque’s appeal was also rejected based on allegations that she committed fraud in the October 2019 presidential elections. The charges were based on an controversial election audit by the Organization of American States. Choque denied wrongdoing.

PUERTO RICO: As soon as Jennifer Lopez opened her feather cape with the flag of Puerto Rico during the Super Bowl halftime show Sunday, thousands of people in the stadium started clapping and shouting. The homage also made an impact on the Caribbean island, as its 3.2 million inhabitants struggle to recover from ongoing earthquakes and aftershocks that have exacerbated destruction from Hurricane María. “There were even people with tears falling down their face,” said a spokesman of Guayanilla, one of the towns most affected by the quakes. Meanwhile, a Puerto Rican columnist saw J.Lo’s costume as a reminder that the U.S.’s oldest colony “also has a voice that will keep screaming from the gut.”

DOMINICAN REPUBLIC: Authorities of the Dominican Republic’s National Directorate of Drug Control confiscated more than 1,000 pounds of drugs in an operation on the high seas that left three suspects injured. Agents said that they found the men inside two fishing boats with 21 drug-filled sacks. A shootout allegedly ensued as enforcement officials approached the vessels. The suspects were detained and taken to the hospital, but still have not been identified. The agency’s spokesperson, Josefina Capellán, said the drugs are probably cocaine or heroin, but forensics will still test the substances to make a final determination.

COSTA RICA: Costa Ricans went to the polls Sunday to elect leaders and representatives of the country’s 82 municipalities. But from the 3.4 million eligible to participate in the election, 75 percent did not show up to cast their votes. Few women were elected to local leadership. Nine women were elected as mayors out of the 82 municipalities. “These numbers clearly reflect that, the way current norms are being applied, they can’t guarantee the incorporation of women in municipal public positions in equal conditions,” the Electoral Observation Mission of the Organization of the American States said.

UNITED STATES: The United States Border Patrol reopened San Diego’s Friendship Park on Sunday, after it had been closed to migrant families for almost two months. Border Patrol officials blocked pedestrian access to the area in December of last year, after walking trails in the state park were deemed hazardous to visitors. The federal park, located at the border between San Diego and Tijuana, is one of only a few meeting locations for families awaiting immigration cases.

MEXICO: The human rights organization Human Rights First reported at least 11 cases of violence against migrants returning from the United States to Mexico City in 2019. The organization alleges at least four of these cases involved Mexico City police officers. The report, first published in December, also documents more than 600 reports of violence, sexual assault or kidnapping of returning migrants along the border. In its report, Human Rights First stated its mission was to “demonstrate that the new policy, ironically called Migrant Protection Protocols (MPP) … is not only immoral, but also illegal.”