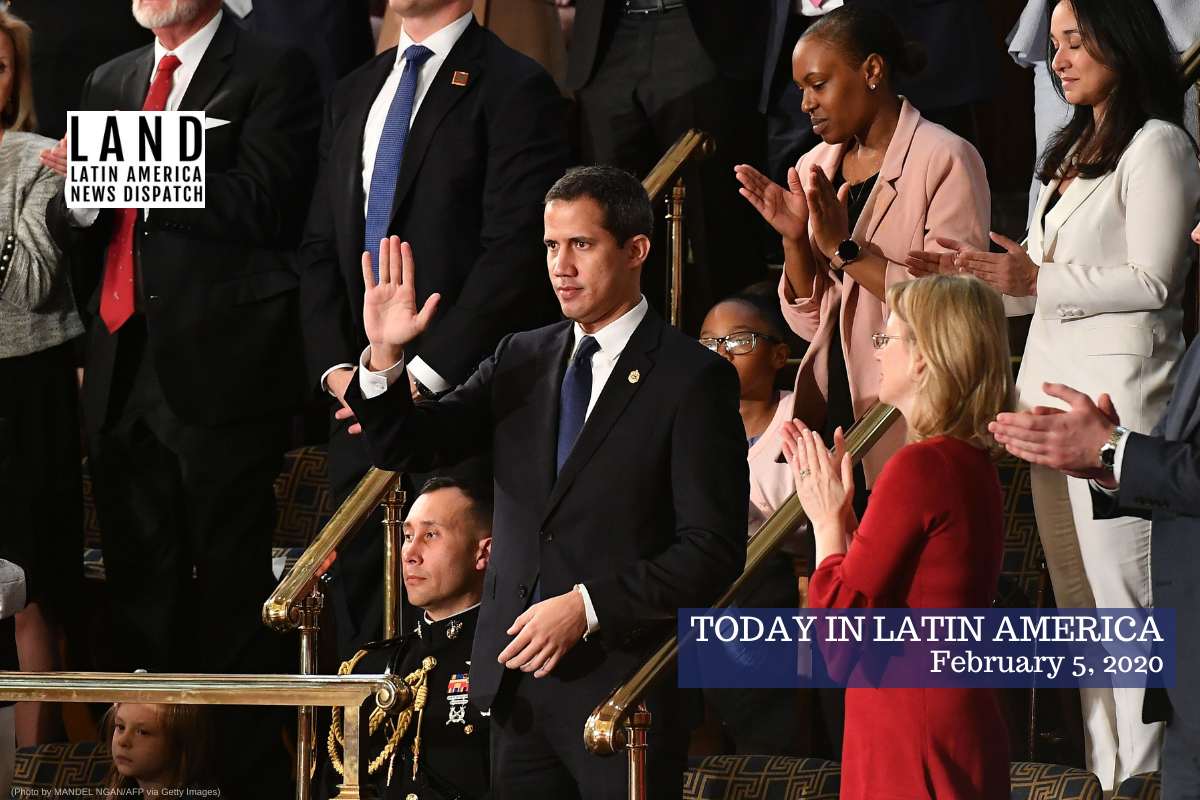 Venezuelan opposition leader Juan Guaido (C) waves as he is acknowledged by U.S. President Donald Trump during his the State of the Union address at the US Capitol in Washington, DC, on February 4, 2020. (Photo by MANDEL NGAN/AFP via Getty Images)

UNITED STATES-VENEZUELA: Juan Guaidó attended the State of the Union speech as a guest of President Donald Trump. The event gave the Venezuelan National Assembly leader renewed visibility as his efforts to assume power in Venezuela have remained stagnant. Guaidó declared himself the rightful leader of Venezuela in 2019 and dozens of countries recognize him as such. However, Nicolás Maduro maintains his hold on power.

Guaidó has visited leaders in Europe and Canada in recent weeks. He has close ties with top Republicans, including Senator Marco Rubio. He sat in Melania Trump’s box during the State of the Union address.

After the speech he tweeted, “I take with me the commitment and support of the United States for our fight for liberty in Venezuela.”

BRAZIL: Brazil’s Ministry of Health declared a national health emergency in response to the Coronavirus. President Jair Bolsonaro also conceded to repatriating another 40 citizens from Wuhan, China, after the group posted an online plea to Brazilian officials. Minister of Health, Luiz Henrique Mandetta, stated that Brazilian citizens coming from China would have to stay in military quarantine for 18 days. Brazil has 14 suspected cases of the virus, but none have been confirmed. Another 13 cases were already dismissed amid concerns of an outbreak.

COLOMBIA:  Uber’s regional manager told the Colombian government that the company is considering taking its dispute to international arbitration. Uber says the company has suffered more than $250 million in damages after being suspended from operating in Colombia and losing 2.3 million users. At Davos, Colombian President Ivan Duque said that technology companies are welcome to operate in the country, but that they would have to operate on a “level playing field.” In response, Uber stated that the government’s decision could be considered a “censorship” against freedom of expression online and internet neutrality.

PUERTO RICO: A magnitude 5.0 aftershock struck Puerto Rico yesterday, following weeks of tremors that began with a 6.4 magnitude earthquake on Jan. 7. Víctor Huérfano, director of the Seismology Network of Puerto Rico, confirmed that the tremor was an aftershock and not another earthquake. The aftershock appeared to trigger a cascade, with 10 smaller tremors occurring in the following hour. The mayor of Guayanilla reported some damage to municipal buildings, but no injuries have been reported in the area.

COSTA RICA: President Carlos Alvarado proposed that the Inter-American Court of Human Rights adopt gender parity in its composition while inaugurating the Inter-American Judicial Year. At the ceremony in San José, Alvarado noted that the court has only had five female judges in its 40-year history. Costa Rican judge Elizabeth Odio currently heads the court.

PANAMA: Gilberto Ventura Ceballos, who is serving a 50-year sentence for kidnapping and murdering five, has escaped prison for the second time, according to the Panamanian National Police. Ventura Ceballos, who is Dominican, was convicted in July 2018 for the 2010 and 2011 killings of five Chinese university students. He previously escaped from prison in Dec. 2016 and was recaptured in 2017. Authorities launched an investigation into Ventura Ceballos’ escape from the Mega Joya prison yesterday, and began searching for him near Panama City.

MEXICO: Nine people were killed in a shooting in the state of Michoacan on Monday. The victims ranged in age from 12 to 18-years-old. The attack occurred in a videogame arcade business in the city of Uruapan. Four gunmen allegedly entered the store looking for specific targets, but started firing indiscriminately when they did not find them. Michoacan is one of the most violent states in Mexico. On Sunday, authorities found 11 bodies in a clandestine grave in Uruapan.

MEXICO: The central bank announced that migrants sent $36 billion in remittances in 2019, a 7% increase in total remittances and a record high. Remittances account for more income than the country’s entire tourism industry and annual petroleum exports. According to the central bank, the average amount of money sent was $326. Recipients used the money primarily to cover costs of living. The International Monetary Fund has warned that Mexico’s dependence on remittances could lead to a decline in the productivity of other sectors of the economy—a relationship also known as “Dutch disease.”