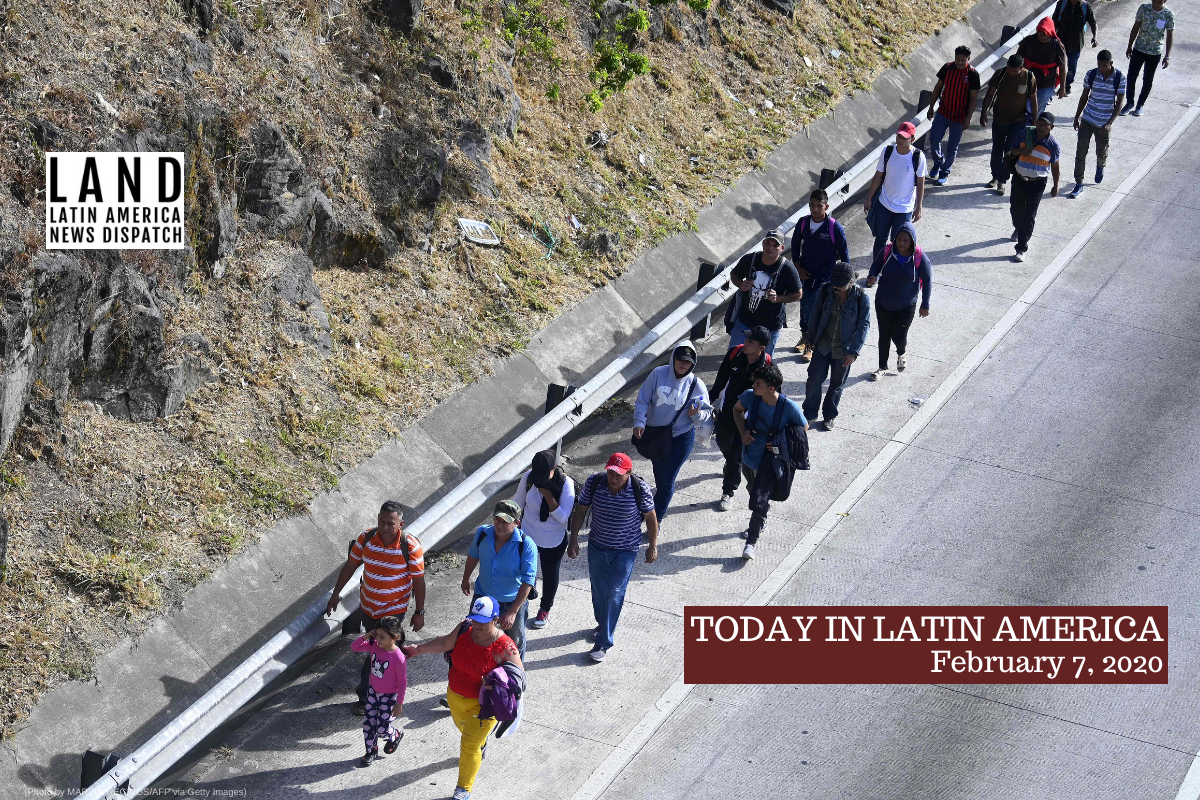 A group of Salvadoran migrants start their journey towards the United States in San Salvador, on January 20, 2020. (Photo by MARVIN RECINOS/AFP via Getty Images)

EL SALVADOR: Foreign Minister Alexandra Hill Tinoco said the country is not ready to accept asylum seekers arriving from the United States. She said El Salvador will wait until it has the conditions and “technical, financial and human capacity” to provide proper treatment and support. Hill Tinoco said that her government is creating a technical team that will meet with U.S. representatives to create an action plan to receive a high number of asylum seekers.

El Salvador is one of three Central American countries that signed the Asylum Cooperative Agreement to receive asylum seekers from the U.S. Guatemala began accepting asylum seekers in November 2019. The agreement is part of the United States’ effort to limit the number of asylum seekers entering the country. Despite U.S. pressure, Mexico has declined to become a so-called “safe third country.”

BRAZIL: A federal judge ruled that British American Tobacco and Philip Morris International must present their defenses in 30 days in a lawsuit in overcompensation for tobacco-related diseases. According to a statement by the solicitor general‘s office, the cigarette companies attempted to delay the lawsuit multiple times and refused to receive subpoenas delivered to their local subsidiaries. The companies, which produce 90% of cigarettes sold in Brazil, were sued in May for “public health costs.” Advocacy groups such as Alliance to Control Smoking see the lawsuit as a success.

COLOMBIA: Jhon Jairo Velásquez, an infamous murderer who worked for Pablo Escobar, died of stomach cancer. The 57-year-old was one of Escobar’s closest associates and boasted of killing at least 300 people for the druglord. Velásquez gave himself up to authorities in 1992, and spent 23 years in prison. During his incarceration he told stories about his life of crime. After his release he started a Youtube channel and profited from tourism. He died at the National Cancer Institute at Bogotá, where he had been receiving treatment since December.

VENEZUELA: Shortly after opposition leader Juan Guaidó met with U.S. President Donald Trump, Venezuelan police seized six top executives of Citgo. The executives, some of whom are U.S. citizens, had been on house arrest after being detained in 2017. They are accused of embezzlement, money laundering and conspiracy. Washington has called for the release of the group. “Citgo believes that the detention of these men as political prisoners violates their fundamental human rights,” the company said in a statement to Reuters.

It is my pleasure to welcome Interim President @jguaido of Venezuela to the U.S. Capitol. https://t.co/G9vsTsun0n

On Thursday in Washington, Guaidó held a press conference with Speaker of the House Nancy Pelosi.

CUBA: Due to green farming practices, Cuban rivers are relatively free of pollution. A team of field scientists from Cuba and the United States tested the impacts of agriculture on water quality in Cuban rivers. It was the first time in over 50 years that scientists from the two countries worked together to study the island’s waterways. The study found that 25 rivers in Cuba had lower concentrations of dissolved nitrogen than the Mississippi River. Scientists believe that a low level of fertilizers and pesticides may be the primary reason. Since the fall of the Soviet Union in the 1990s, farmers turned to conservation agriculture, no longer depending on imported chemicals.

HONDURAS: The number of Hondurans deported to their home country in January was almost 74% higher, compared to the year before. A total of 109,185 Hondurans were deported in 2019, an increase of more than 25,000 from 2018. Most migrants were deported from the United States and Mexico, although some were removed from other Central American countries. Many of the deportees in January were part of a US-bound caravan. Despite the high number of deportations, remittances to Honduras continued to rise, making up almost 20% of the country’s GDP and sustaining many of its citizens.

U.S.-MEXICO: The suspect in the Aug. 3 Walmart shooting, Patrick Crusius, was charged with 90 counts of federal hate crimes. Crusius was indicted on a capital murder charge last September. Prosecutors are expected to discuss with the victims’ families the option of the death penalty or life in prison without parole. The massacre occurred at an El Paso store, often frequented by Mexicans from Ciudad Juarez. Crusius killed 22 people and wounded another two dozen. Most of the victims were Mexican nationals or Mexican-Americans. Just before the attack, the suspect posted a lengthy anti-immigrant manifesto online.

UNITED STATES: The Trump administration will now block New York residents from the Trusted Traveler program, which allows members to bypass security lines and expedite travel. According to DHS Acting Deputy Secretary Ken Cuccinelli, the suspension of the program is due to New York’s “refusal to cooperate” with federal immigration enforcement. Lawmakers approved the Green Light Law last June, which allows state residents to apply for a driver’s license regardless of their immigration status. The law also protects the identity of the applicants by prohibiting the DMV from disclosing applicants’ information to federal authorities without a court order.