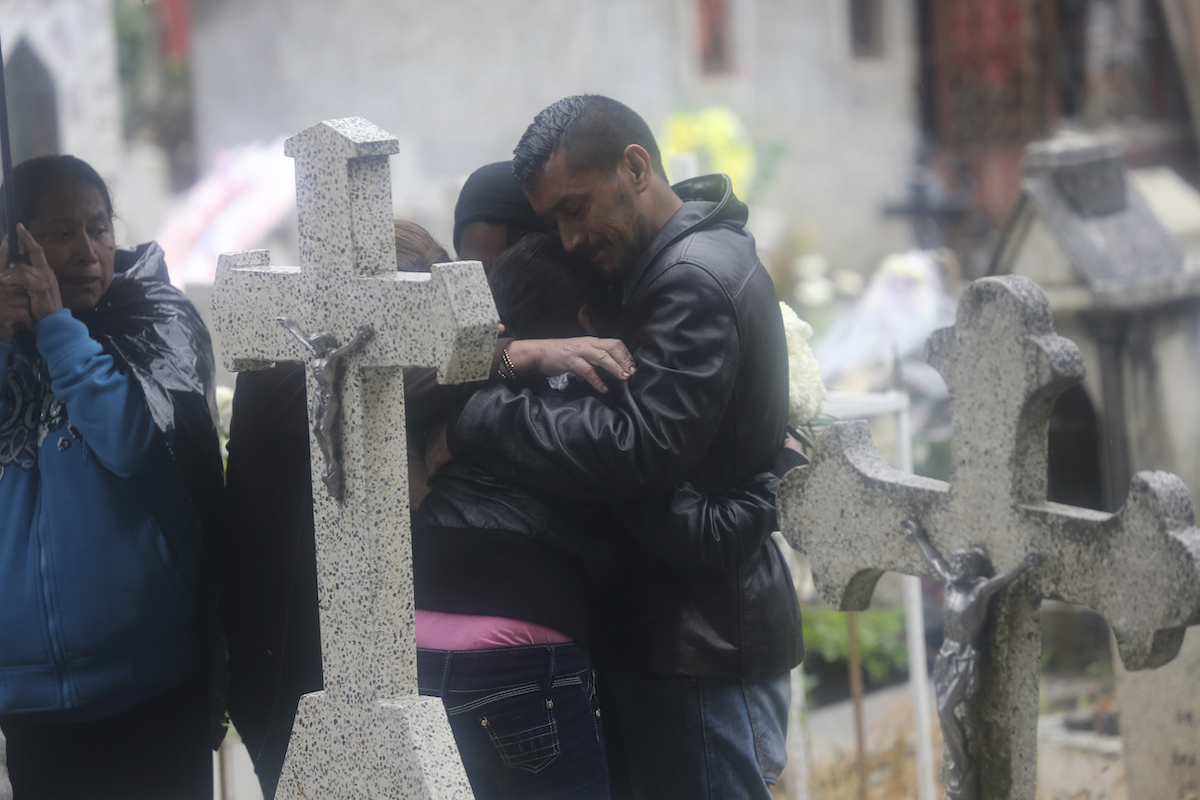 In this February 5, 2020 photo, family and friends gather for the burial service of one of three children shot dead in a video-game arcade, in Uruapan, Mexico. (AP Photo/Marco Ugarte)

By ASTRID GALVÁN, The Associated Press

Cartels are battling for territory and reports of grisly killings are common, such as the gun massacre last week of three young boys, a teenager and five others who were playing video games at an arcade in what had been a relatively quiet neighborhood.

“You constantly hear that there are a lot of dead here in Uruapan,” said Uvilla, a 20-year-old stay-at-home mom, adding that she doesn’t know what to do anymore other than be extra cautious with her 1-year-old son. “And you don’t live at ease, because now when you go out, you do so with fear.”

The names of cartels have changed over the years in Uruapan as groups and alliances wax and wane, but the killings continue. Similar stories are playing out in many towns and cities across the country, leaving millions of Mexicans fearful, frustrated and discouraged amid record homicide levels, de facto cartel control over entire communities and no apparent end in sight to nearly a decade and a half of drug conflict.

Mexico recorded 35,588 homicides last year, the most since comparable records began to be kept in the 1990s, though the rate of increase was far lower than in previous years. Since then-President Felipe Calderón ramped up a militarized anti-drug offensive beginning in 2006, annual killings have more than tripled in the country.

Current President Andrés Manuel López Obrador, who took office in December 2019, has in the past referred to his security strategy as “hugs not bullets” and emphasizes addressing root causes of violence such as poverty, youth unemployment and corruption, in contrast to his predecessors.

“If we keep doing the same thing we can’t expect different results,” university professor Emiliano Maciel Ávila said while walking in Uruapan’s main square. “I don’t think this hugging and kissing thing is working. I think we have to combat them.”

Only a handful of National Guard members were seen in Uruapan on Wednesday, the rainy day when the murdered boys were buried

By the next day, the sun shone brightly, and double the number of guardsmen and -women stood at that entryway, checking cars and trucks. More police, both federal and state, were seen driving through town, circling Uruapan’s central square.

But not many believe that will make much of a difference.

“We don’t expect anything from authorities anymore. People are very disenchanted,” said the Rev. Sergio Arroyo, who presided over the funeral for the arcade victims.

López Obrador reformulated Mexico’s security forces into a new National Guard that deployed last year with some 70,000 troops nationwide. But as before, police and troops often find themselves outgunned by the cartels. Moreover, the Guard has also been tasked with immigration enforcement following intense pressure from Washington, raising questions about whether that would distract from its security responsibilities.

Arroyo said locals would have to take it upon themselves to turn things around in the city of some 340,000 people, whose colonial-style downtown is a few blocks from the verdant Cupatitzio National Park that abounds with springs and small waterfalls. He suggested peace marches, committees of community and faith leaders and pressure on the government to take action.

“Prayer without action won’t do anything,” Arroyo said.

The detonator of Mexico’s drug war, which has left an estimated 150,000 dead so far, is often traced to Uruapan, where in September 2006 masked gunmen burst into a bar and tossed five severed heads onto the dance floor.

Recent events made clear that Uruapan, where murders rose 61% from 2018 to 2019 according to government figures, remains a hot spot of violence. The Jalisco New Generation cartel and Los Viagra gang are waging a turf war, and other groups and factions also may come into play.

The day before the arcade shooting, the bodies of 11 people were found in clandestine graves on a hill where luxury apartments are being built. A day earlier, gunmen attacked a municipal police patrol, killing an officer and wounding two. The attack may have been in retaliation for the earlier arrest of a Los Viagras leader who’s been implicated in 19 killings.

So in a city where stores all around the city display giant Valentine’s Day teddy bears for sale, bloodshed is common.

Uruapan residents say they avoid leaving the house at night and don’t let children play outside. Two of the boys who were killed in the arcade didn’t have permission when they sneaked out to play, relatives said.

The boys, all from the same neighborhood, were gunned down in broad daylight in the small, bright blue arcade, which was adorned with candles and remained closed after the funeral.

The motive behind the attack has not been clarified, and many residents of the neighborhood where it happened were loath to speculate. But some around town said they suspect gangs may have been extorting the arcade’s owner—a major issue in this city, according to residents.

Over time, so many criminal bands have fought with and within each other that it’s impossible to know who’s behind what, many say.

“You don’t know who’s good, who’s bad, who’s doing what to pacify,” said Guadalupe Correa-Cabrera, a global fellow at the Woodrow Wilson International Center for Scholars and George Mason University professor who has written extensively on violence and organized crime in Mexico.

Correa-Cabrera’s family had to flee Michoacán after her father was extorted and threatened by the once-dominant Zetas cartel.

“We don’t have the police to respond to the needs of the country, and the National Guard was very recently created without a very clear plan for how, where, they were going to fight violence,” she said.

Michoacán Gov. Silvano Aureoles Conejo last week promised a new security strategy in Uruapan, though he said he could not give details.

Carlos Manzo, a lifelong Uruapan resident and social activist, believes his city could one day be the prosperous tourist attraction it was when he was growing up. The food, culture, history and natural wonders that once drew European and American travelers remain, he said, but it’s up to the people to improve the quality of life.

“We have to stop being afraid. Fear is going to kill us,” Manzo said. “When you no longer have options for happiness, well then you’re done.”