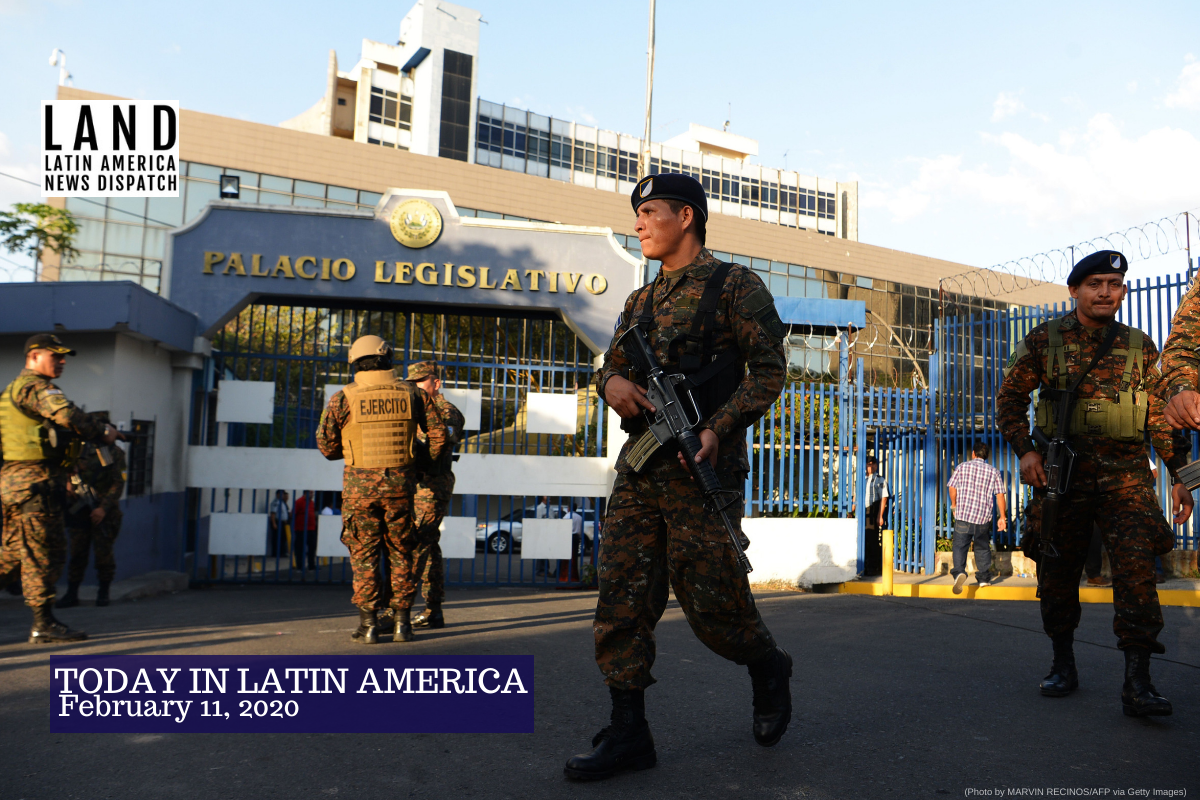 In this picture taken on February 9, 2020, soldiers guard the Legislative Assembly, in San Salvador, as supporters of Salvadoran President Nayib Bukele gather outside it to make pressure on deputies to approve a loan to invest in security. (Photo by Marvin Recinos/AFP via Getty Images)

Heavily-armed troops occupied the Legislative Assembly on Sunday as lawmakers debated whether to approve a $109 million loan to equip security forces in the country. Bukele prayed with the soldiers and asked his supporters for patience. He gave the lawmakers one week to approve the bill, threatening to dissolve congress.

In a long string of Tweets on Monday defending his actions, Bukele said that “when things calm down, it will be clear who is fighting for the people and who isn’t” and invoking the support of God, the National Police and the Armed Forces.

U.S. Senator Patrick Leahy of Vermont said in a press release that the events were, “reminiscent of the days when political disputes were settled with threats and violence. That cannot be condoned today, especially by a government that wants to be a partner of the United States.”

BRAZIL: Heavy early morning rains shut down parts of São Paulo yesterday. The torrential downpour caused floods, landslides and traffic jams. Some areas of the city received over four inches of rain and the Tiete and Pinheiros Rivers rose to their highest levels in 15 years. At least 30 people have died so far this rainy season in Brazil, including in the hardest-hit state of Minas Gerais. Rainfall is expected to continue in the coming days.

BOLIVIA: Former president Evo Morales flew to Cuba yesterday to seek medical treatment. Morales has been living in Argentina, after a military backed coup ousted him in November 2019. Morales went to the island to receive medical treatment for an undisclosed reason, according to Argentine President Alberto Fernández. Morales visited Cuba in 2016 and 2018 to remove a growth from his vocal cords.

ECUADOR: The trial against former President Rafael Correa and 20 other former government officials began. Correa and other PAIS Alliance Party politicians are accused of accepting cash payments in exchange for public works contracts. According to prosecutors, several companies paid roughly $7.7 million to 11 officials. Correa has denounced the judicial action as an attempt to prevent his participation in upcoming elections.

PUERTO RICO: Governor Wanda Vázquez rejected a settlement with bondholders that would diminish the island’s debt by 70%, leaving the U.S. territory in economic limbo. The deal, studied and approved by a federal control board responsible for Puerto Rico’s finances, would contribute to reducing the more than $70 billion in public debt that forced the government to file the largest U.S. municipal bankruptcy in May 2017. Vázquez said the deal would burden the island’s retirees.

TRINIDAD & TOBAGO: The Health Ministry of Trinidad & Tobago denied entry to a cruise ship after at least 300 passengers and 22 crew members contracted a gastrointestinal illness, according to the U.S. Centers for Disease Control and Prevention (CDC). The CDC suspects the cruise-goers contracted the norovirus, a common stomach bug that causes vomiting, diarrhea and stomach cramping. The cruise, operated by the American company Princess Cruise Lines, had to turn around and is now returning to Florida. In a statement sent to the Associated Press, the company said this is a “highly unusual development,” and that they chose to take “an abundance of caution.”

UNITED STATES: President Trump released a $4.8 trillion budget proposal for the next fiscal year. It includes funding to continue the administration’s restrictive immigration policies, including $2 billion tagged to construct 82 miles of border wall, $3.1 billion to increase capacity in immigration detention centers, and more than $700 million to hire ICE and Border Patrol agents. The border wall request is less than last year’s $5 billion, which led to the five-week government shutdown.

UNITED STATES: Eric Garcetti, the mayor of Los Angeles, co-founded a program that aims to double the number of Latino creators working in Hollywood. Eva Longoria and J.J. Abrams are among the champions of the project, called “LA Collab,” which seeks to connect actors and creators with studios, filmmakers, and others in the industry. The USC Annenberg Inclusion Initiative found that in recent years, Latinos have filled only 3 percent of leading roles, on average, in Hollywood.