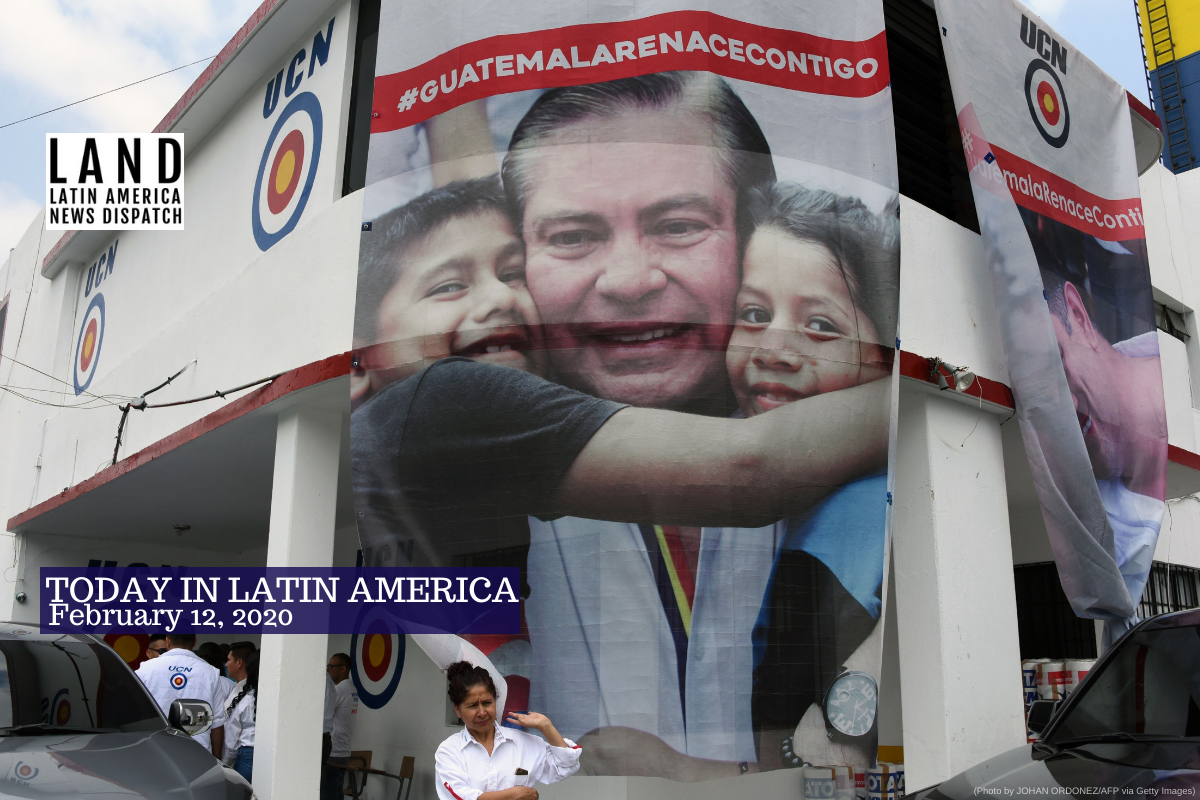 View of a poster of Guatemala's presidential candidate for the Union del Cambio Nacional (UCN) party Mario Estrada at the UCN headquarters in Guatemala City on April 18, 2019. (Photo by JOHAN ORDONEZ/AFP via Getty Images)

GUATEMALA: The U.S. Attorney for the Southern District of New York sentenced former Guatemalan presidential candidate Mario Estrada to 15 years in prison on charges of conspiring to import cocaine into the United States. Estrada was arrested in Miami, Florida in April, and pleaded guilty to the charges filed against him. Another man, Juan Pablo Gonzalez, was also implicated in the crimes, which included conspiracy to assassinate political rivals.

During his 2018-2019 campaign, Estrada met with confidential Drug Enforcement Administration sources posing as members of the Sinaloa Cartel. Estrada sought millions of dollars worth of financial support from the cartel, and promised to support the cartel from within the Guatemalan government if elected. His offer included allowing the cartel to transport tons of cocaine into the United States through Guatemalan ports and selecting cartel members to fill positions in his government. Newly-elected President Alejandro Giammattei, who ran against Estrada, said he had no comment on the case.

CHILE: Volkswagen and Daimler are pushing for more sustainable lithium mining in Chile, as the demand for electric vehicles increases. According to lobbying records obtained by Reuters, the German Development Agency (GIZ) and the public-private Fundación Chile are working on a feasibility study. Residents and environmental groups have expressed concerns over sustainability in the region, since miners extract the metal from pools of brine in the ecologically fragile Atacama region.

VENEZUELA: Venezuelan opposition leader Juan Guaidó has returned to Caracas after his “Agenda Internacional” tour across Europe and the United States. Reactions to his return were mixed— protesters threw soda and traffic cones as he left the airport, while supporters chanted in celebration. On Twitter, Guaidó said he returned to Venezuela with “the commitment of the free world, willing to help us recover Democracy and Freedom.”

During a meeting in the Oval Office, President Donald Trump recognized Guaidó as the “legitimate president of Venezuela.” He has the support of more than 50 countries, including the United States.

PUERTO RICO: Doctors discovered 151 packets of heroin under the clothes of a 4-year-old boy hospitalized after a shooting in Ponce yesterday. Police Capt. Joel González told the Associated Press that gunmen chased a suspect named John Hernández into an apartment he shared with the boy’s mother before opening fire, killing Hernández and injuring the 4-year-old. Police are investigating who placed the foil-wrapped heroin packages in the boy’s clothes.

HONDURAS: Government officials arrested National Police Chief Leonel Luciano Sauceda and his wife, Patricia Sbeltlana Estrada, in connection with money laundering charges. Authorities identified 13 bank accounts with the equivalent of $560,000 in Sauceda’s name, and 10 bank accounts with the equivalent of $110,000 in Estrada’s name, which could not be traced. Sauceda was promoted to chief of police two weeks ago and has worked for the national police since 1992.

MEXICO: A district administrative judge from Mexico City ordered that five children undergoing cancer treatment be given their medication within 24 hours. The Health Secretariat must immediately provide the five families with medication that has been denied to them due to lack of supplies at local clinics. The decision comes after the Democratic Revolutionary Party (PRD) sued the Health Institute of Well-Being (INSABI). There are more than 100 similar lawsuits by families whose children also need medical care.

UNITED STATES-CUBA: The Archbishop of New York, Cardinal Timothy Dolan, celebrated mass in Havana, Cuba on Monday. Cuban President Miguel Díaz-Canel invited Dolan in a move to improve bilateral relations. The visit comes at a time of increased pressure by the United States government on Cuba. President Donald Trump reversed many of former president Barack Obama’s policies that permitted travel to Cuba and increased remittance allowances. The Cardinal will stay in Cuba until Wednesday.

UNITED STATES: The New York Attorney’s Office announced that it is seeking the extradition of a nephew of Rafael Caro Quintero, a convicted Sinaloa Cartel kingpin. Ismael Quintero Arellanes was arrested in Mexico in late January. He is accused of working with Caro Quintero to distribute illegal drugs and firearms to the United States. If extradited, Arellanes would face at least 20 years in a federal prison. Caro Quintero was accused of the 1985 murder of DEA Agent Enrique Camarena and smuggling large amounts of narcotics into the United States. He was released from prison in 2013.