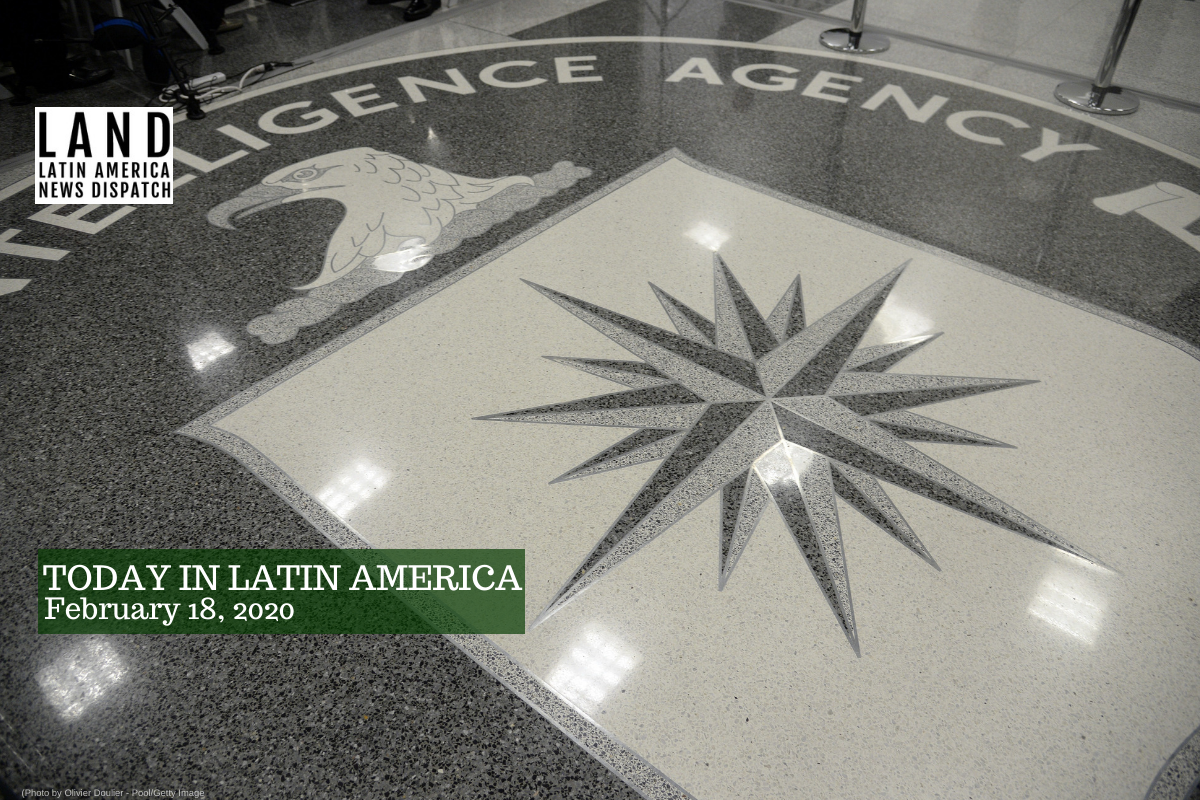 The U.S. government supplied the equipment as part of Operation Condor, a campaign that backed Latin American dictatorships to eliminate perceived threats to their rule. The files show that CIA officials were concerned by human rights violations in Latin America but did not act to stop or disclose the atrocities. Current and former employees say the program stoked ongoing debates about moral responsibility in espionage activities.

The equipment came from a Swiss company called Crypto Ag, which the CIA secretly owned. The company was part of a joint operation with West Germany, called “Operation Rubicon.” More than 120 countries used the encrypted communication devices.

BOLIVIA: The presidential candidate for Movement to Socialism (MAS) party, Luis Arce Catacora, is leading in the first election poll. He polled at 31.6 percent, followed by Carlos Mesa of the Comunidad Ciudadana party with 17.2 percent. Interim president Jeanine Áñez polled at 16.5 percent. Mesa and Áñez could pose a threat to Arce’s chances in a second round vote. Evo Morales’s party chose Arce to continue the legacy of the exiled former president. Morales was ousted in a coup following accusations of fraud in the October elections. The new presidential election will be held on May 3.

COLOMBIA: The foreign ministry confirmed the first case of a Colombian national with coronavirus. The patient is aboard the Diamond Princess cruise ship where he worked as part of the crew. The ship has been in quarantine since Feb. 5 in Yokohama, Japan. The U.S. has evacuated 14 passengers with the deadly illness and 328 other asymptomatic Americans from the ship over the weekend.

VENEZUELA: The Venezuelan government, under President Nicolás Maduro, acted against opposition leader Juan Guaidó and his allies yesterday. Guaidó returned last week from a three-week tour to North America and Europe to garner support for his interim presidency, defying a travel ban. TAP Air, the Portuguese airliner that transported Guaidó, was suspended from operating in the country for 90 days. The Maduro regime also sent a letter of protest to France accusing ambassador Romain Nadal of interfering in internal affairs by meeting Guaidó at the Caracas airport on his arrival. France and the European Union recognize Guaidó as the legitimate president of Venezuela.

DOMINICAN REPUBLIC: A sudden power outage affected millions of people yesterday in the East and Central areas of Dominican Republic, including the Santo Domingo metropolitan area. At around 3:40 pm, several electric plants stopped working and 800 megawatts went offline. The blackout halted the operation of Santo Domingo’s Metro and Cable cars, leaving passengers stranded. Authorities said they are investigating the cause of the outage.

HAITI: After 15 children were killed in a fire that consumed an orphanage last week in the outskirts of Port Au Prince, relatives still have no confirmation of the victims’ identities. Over the weekend, officials told several people who approached the gates of the burned building to inquire about their children that there were no updates. The Church of Bible Understanding, based in Pennsylvania, runs the children’s home. Workers at the orphanage said the victims range from babies to 10-year-olds.

President Jovenel Moïse tweeted he was “deeply moved” by the deaths and asked for “urgent measures to establish the cause of this tragedy.”

NICARAGUA: Daniel Ortega’s regime is accused of incarcerating 61 people because of their political beliefs, according to a preliminary count published by the Civic Alliance for Justice and Democracy. Advocates say 35 of these prisoners are waiting for trial, 21 were already found guilty and five are in jail with no specific accusation. Prisoners’ relatives and members of an organization opposing Ortega’s government say they are ready to begin a hunger strike in protest.

U.S.-MEXICO: U.S. authorities warned during a hearing that Mexico could face sanctions for a potential deal to purchase helicopters from Russia. U.S. Deputy Assistant Secretary of State for Western Hemisphere Affairs, Hugo Rodríguez, told a House Foreign Affairs sub-committee that the State Department made its concerns known to officials at the U.S. Embassy in Mexico. The controversy stemmed from comments made by Sergei Lavrov, Russia’s foreign minister.