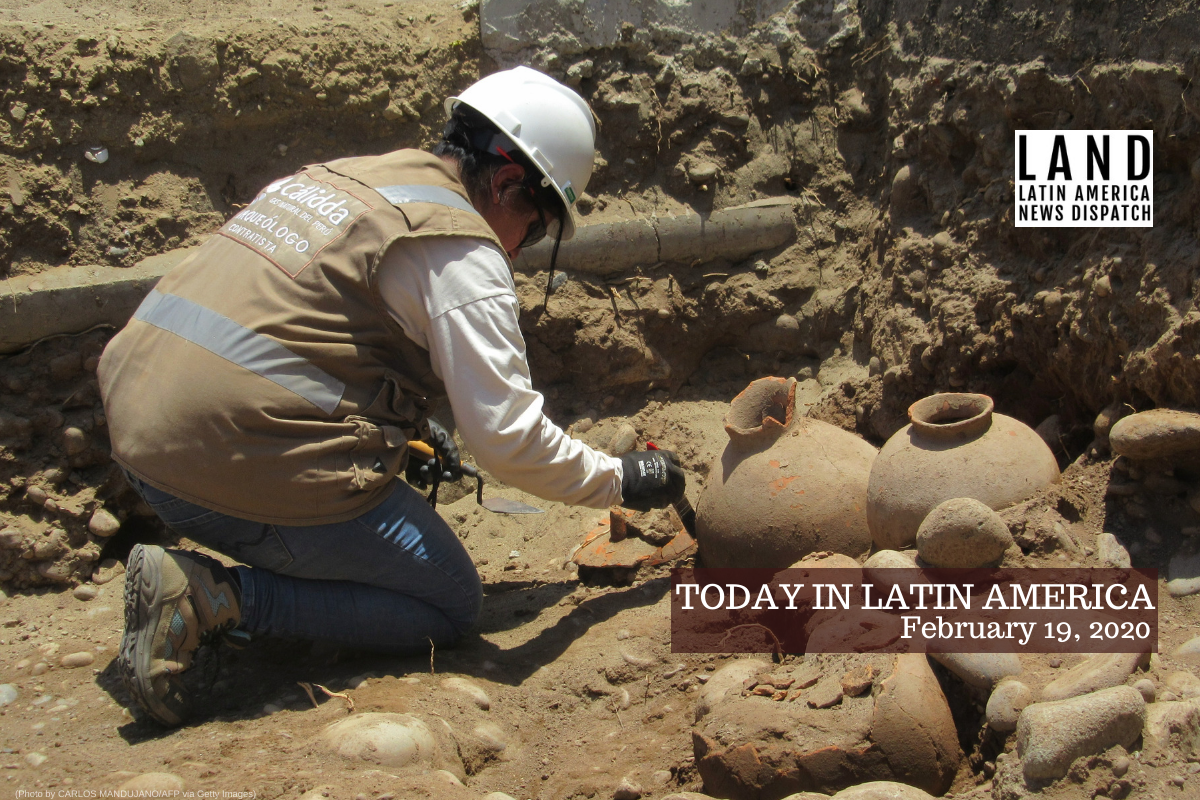 An archaeologist excavates the site where a 1,800-year-old cemetery was found in Lima, on February 6, 2020. (Photo by CARLOS MANDUJANO/AFP via Getty Images)

PERU: A team of archaeologists working for a gas company in Peru has spent two decades uncovering centuries-old Incan treasures. Over the past 16 years, Calidda, the Colombian-based company, has reported some 300 archaeological finds across thousands of miles of natural gas lines.

Just this week, workers from Calidda found four burial plots and ceramic vessels in Lima’s Puente Piedra neighborhood. In the last two years, Calidda’s 40 archaeologists have found hundreds of artifacts from pre-Incan civilizations, as well as the bodies of Chinese farmers dating to the 19th century.

Preservationists in Lima have hailed the company’s efforts. According to Peruvian law, companies must report archeological discoveries and turn them over to the Culture Ministry for conservation. However, some developers have disregarded the law. Calidda’s collaboration with city archaeologists has been called a step forward in preserving some of the country’s oldest archaeological sites.

BRAZIL: The Justice Ministry announced that authorities in Brazil and four other countries will arrest 112 people on international child pornography charges. The move is part of Operation Light in Childhood, launched in 2017. Police in 12 Brazilian states, Colombia, Panama, Uruguay and the United States are investigating people allegedly involved in the sexual exploitation of children. In Brazil, officials have already arrested 38 people and taken 187,000 files for further investigation. Operation Light in Childhood has led to 600 arrests.

VENEZUELA: The Trump administration announced new sanctions against a Russian state-controlled brokerage for trading with Venezuela. Rosneft Trading S.A. has helped the Maduro administration evade the American oil embargo. American officials added the brokerage and its president, Didier Casimiro, to the financial blacklist. The company is based in Switzerland, and arranges sales between Venezuela and governments across Asia. Rosneft spokesperson Mikhail Leontyev denied the allegations and told a Russian radio station that the company operates, “in strict accordance with the international law.”

REGION: The 31st Inter-Sessional Meeting of the Caribbean Community (CARICOM) began yesterday in Barbados. Regional leaders are expected to discuss approaches to containing the Coronavirus and the status of the CARICOM Single Market and Economy. However, in the days leading up to the meeting, many leaders announced that they would not be attending the talks, including Jamaican Prime Minister Andrew Holness, Canadian Prime Minister Justin Trudeau and Haitian President Jovenel Moïse.

GUATEMALA: President Alejandro Giammattei said that three Indigenous leaders from Ecuador were expelled from Guatemala over the weekend. He alleged that Jaime Vargas, Apawki Castro and Luisa Lozan were during “political work” without a visa. The Ecuadorian government has charged Vargas, president of the Confederation of Indigenous Nationalities of Ecuador (CONAIE), with sabotage, rebellion, terrorism, subversion and kidnapping during the October 2019 protests. In a communiqué, CONAIE said that the group was in Guatemala to participate in the “Waqib´Kej” Mayan National Convergence. CONAIE denies that the group had been expelled from the country.

MEXICO: Mexico City schools announced tougher rules for students and parents on Tuesday, after a young girl was found murdered over the weekend. Security cameras recorded seven-year-old Fátima leaving her school with an unknown woman, after the child told staff she recognized the woman. City officials are now asking parents to pick up their children 20 minutes after classes end. Children who are not picked up will be sent to a city prosecutor’s office with a police escort. Fátima’s murder and the high number of feminicides prompted protests outside the National Palace on Tuesday.

UNITED STATES: The Department of Homeland Security (DHS) waived contracting laws on Tuesday to facilitate the rapid construction of the U.S.-Mexico border wall. Chad Wolf, acting DHS secretary, invoked a 2005 law that allows officials to waive requirements such as open competition and contractors’ right to appeal decisions. The move is expected to allow President Trump to complete at least 94 miles of the border wall by the end of the year.