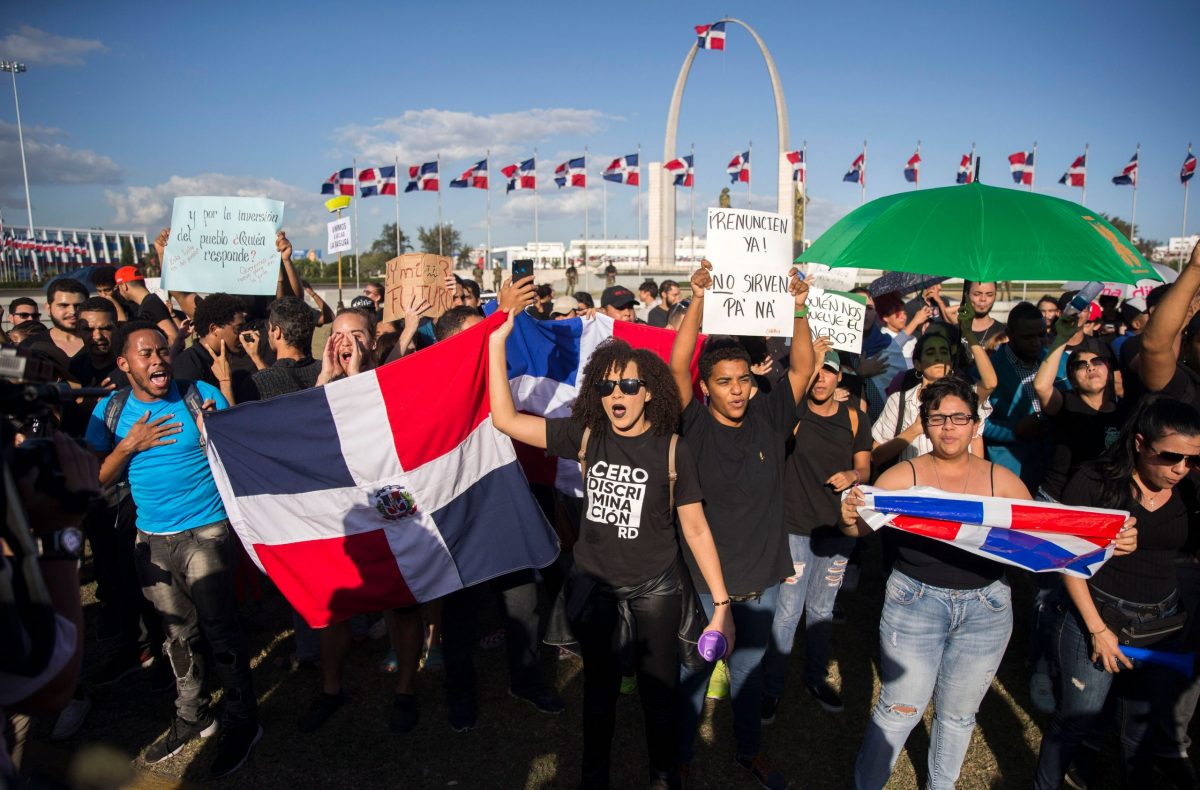 People demonstrate outside the Central Electoral Board (JCE) in Santo Domingo on February 17, 2020 a day after electronic voting systems failed forcing authorities to suspend municipal elections across the country. (Photo by ERIKA SANTELICES/AFP via Getty Images)

On the evening of February 18, young Dominicans dressed in black protested while standing behind a black coffin across the street from Santo Domingo’s Central Electoral Board (Junta Central Electoral or JCE in Spanish). What was inside the coffin?

The protest, which brought out hundreds of youth in Santo Domingo and the city of Santiago de los Caballeros, was in response to the cancellation of municipal elections which were set to take place on Sunday, February 16. The elections were canceled about three hours after they began. And while the JCE cited issues with the automated voting machines as the cause, Dominicans quickly responded by taking to the streets, worried that there are more than technical issues behind the cancellation.

“The truth is I’m afraid and feel really worried. It’s impossible not to feel worried about the future and what could happen,” Michelle Ricardo, a local artist and educator told Latino USA. “Dictatorship is right around the corner. Actually, it’s already there. All that’s missing is for the state to say it, but it’s there.”

Protesters were clad with signs that said “Con mi democracia no te metas” (“Don’t mess with my democracy”) and “El pueblo ‘ta revoltiao” (which roughly translates to “The public is revolting”). To rally protesters, some of the messages on social media included, “El pueblo está con la pampara prendía” (which roughly translates to “The public is lit”) and hashtags like #SeVan (“They’re leaving”) and #PaFueraLaJunta (“Out with the JCE”), demanding that the leaders of the JCE resign.

Around 8 p.m. local time, a tear gas bomb was thrown at the Santo Domingo protesters. While neither the national police nor the government has released any statement in connection to the tear gas bomb, video shared by the group Somos Pueblo RD seems to show that it came from directly inside the JCE headquarters.

When the JCE canceled the elections, they initially said there were complaints in relation to the automated machines placed in populous areas and that not all the candidates were appearing on the ballots. As the Party for the Dominican Liberation (PLD) has been in power locally and nationally for over 18 years, this concerned other parties who accused the JCE and the PLD of attempting to commit fraud.

“The country’s authorities have led us to a deep institutional crisis. It’s indignant and unjustifiable for democracy to have failed so greatly,” Luis Abinader, presidential candidate of Modern Revolutionary Party (PRM), said in a statement to the press. “Evidently, the JCE has failed and this crisis has people who are responsible for it. We demand that those who have created this great damage to Dominican democracy be identified.”

He added that when the leaders of the PRM were informed about the issues and consulted about the possibility of canceling the elections, the party said that the proposal was not acceptable. “It’s not acceptable and discriminatory to only count the votes of the minority. The grave problems happened with the ballots for the PRM and the opposing parties.”

Presidential elections are set to be held in on May 17.

Batolomé Pujals, who is running for mayor of Distrito Nacional (which includes Santo Domingo) said that he started receiving calls at around 8 a.m. on the morning of the elections that candidates in his party, Country Alliance (Alianza País or ALPAIS), were not appearing in the ballot, leading to a lot of frustrations as some left the voting stations while others picked from the candidates that did appear in the ballots.

“Really, the conversation regarding the JCE has been ongoing for months, because the JCE hasn’t acted independently, or transparently, or objectively. And since before October, there have been demands that the JCE respect its own protocols,” Pujals told Latino USA, “The problem with the automated vote is that the JCE imposed it, above the opinions of the citizens or the opposing political parties.”

Pujals posted a message on Twitter demanding the resignation of the JCE.

Pujals has also joined some of the protesters demanding accountability. “My reason for protesting, above all, is that what’s at stake is one of the most essential conditions of an electoral democracy, and that is the possibility of voting, and the possibility of being elected,” he said.

The president of the JCE, Magistrate Julio César Castaños Guzmán said that it will be investigating to see what happened.

“The ballot marked an error in more or less half of the colleges, that is, it uploaded them incomplete,” Castaños Guzmán said.

In a leaked video where members of the JCE board spoke of the decision, Castaños Guzmán was seen saying that he consulted President Danilo Medina about the decision.

Two days after the elections were canceled, President Medina addressed the public in a televised statement. “It’s time to rectify some errors and continue,” he said.

Former President Leonel Fernández, who changed the constitution so that he could hold the presidency for over 10 years and was the known leader of the PLD, is now running under a separate party.

“We need to have a political dialogue between the main leaders of different civic organizations, in order to find a solution,” he said.

There are reports spreading across social media that have sparked outrage among the public and caused people to point their fingers to the PLD. One includes video footage showing representatives of the JCE arriving the night before, without other delegates from other parties present. During the video, a PRM representative can be heard asking, “What were you doing with the machines?”

A technician working with the company Claro, Manuel Regalado, is now being identified as a whistleblower after he texted Coronel Ramón Antonio Guzmán Peralta with allegations of machines being sabotaged. Regalado said another coronel was trying to enter the election premises, and that this was suspicious.

Since then, Regalado was arrested and his family said earlier on Wednesday that he had been tortured and taken to the Centro Médico Dominicano. The national police is linking him to the sabotage, while people on social media are calling him a hero.

U.S. Congressman Adriano Espaillat, who was born in Dominican Republic and immigrated to the U.S., released a statement on Twitter also denouncing the JCE and asking for its leaders to resign.

The public is also concerned about the amount of tax pesos spent on the elections, a quantity they know believe has been wasted. During the protests in Santo Domingo, one woman held a sign that said, “15 mil millones de pesos a la basura” (“15 billion pesos in the trash”).

Williber Cruz, a 20-year-old who described himself as a concerned citizen, helped organize the protest in the city of Santiago.

“In Santiago on Monday, we didn’t see any kind of call to mobilize, and a group of people and me decided to ask people to come to the monument,” Cruz told Latino USA. “We didn’t expect that many people, but starting at 4 p.m., people began to show up.”

He said that while there wasn’t a strong police presence, they were warned that at 8 p.m. they would start removing people.

“We started asking people to leave so everything turned out fine, but as we left we saw military trucks arrive,” Cruz added.

Some celebrities have also called for people to protest. Rapper Melymel posted on her page, asking people to take the streets, and she herself joined the Tuesday evening protest. Comedian Carlos Montesquieu and musical artists like Juan Luis Guerra, Vicente García and Rita Indiana have also posted messages of solidarity on their pages.

This isn’t the first scandal that has plagued the country. Previously, members of the PLD were also involved in the Odebrecht scandal that involved several Latin American countries, where officials accepted bribes. Yet unlike other countries, Dominican leaders haven’t been brought to justice, with the Supreme Court recently rejecting the case.

“I’m not surprised that it’s the youth who’s taking the streets,” Ricardo said, “it is these generations who are going to provoke change. There’s so much anger in Dominican society that I think this will keep growing.”

February is the country’s carnival season. Throughout the month, festivities are held leading up to February 27, when the country celebrates its independence day. As protests continue to mount just a week before the annual celebrations, Dominicans are wondering if theirs is a true democracy.

“I think that having 27 de Febrero right there, so close, it moves people into an instinct to preserve nation or freedom,” local artist Ricardo told Latino USA, citing that while she doesn’t believe in a kind of strict nationalism, the date of these protests is important. “The only thing that I can think of is that citizens feel a lot of anger, and I feel a lot of anger, and I know I’m not the only one.”

Protests are expected to continue Wednesday afternoon and into the weekend across the Dominican Republic and in the predominantly Dominican neighborhood of Washington Heights, in New York City.

A new date for municipal elections has been set for March 15.