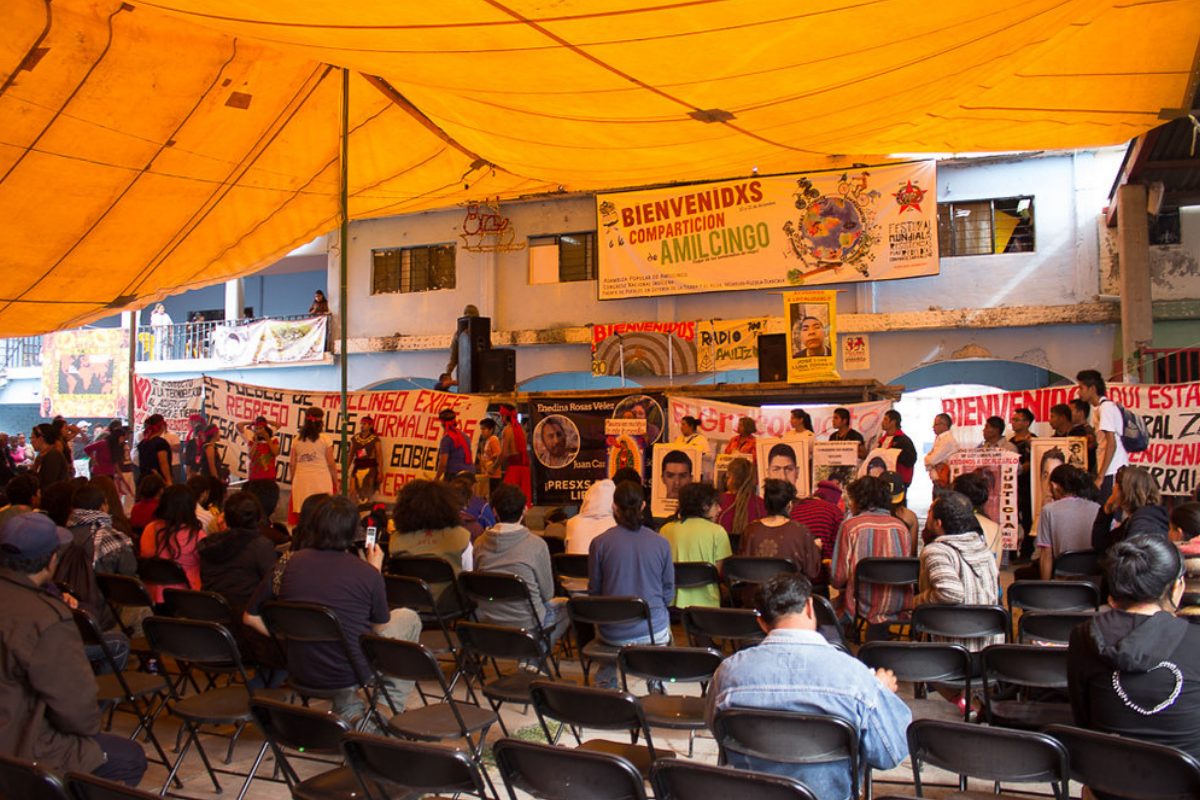 Samir Flores Soberanes was gunned down outside his home on February 20, 2019. The Indigenous Náhuatl farmer, radio producer, and environmental activist was from Amilcingo, Morelos. The day before he was killed, Samir publicly spoke out against the Morelos Integral Project (MIP)—a government-backed plan to develop energy infrastructure in the area, including two thermoelectric plants and an inter-state gas line.

The night of the murder, Morelos state attorney general Uriel Carmona Gándara said in a television interview that organized crime was behind the murder. Oddly confidents just hours after the crime, he said, “We don’t have a single element that connects it to the thermoelectric plant.”

In the year since, irregularities and omissions have defined the investigation. There are still no convictions in Samir Flores’ murder. This month, movements around the country, including the National Indigenous Congress, are mobilizing, demanding the federal government to take over the case and shelve the development project.

“Samir’s murder is a political murder, because it occurred in a political context and due to his defense of human rights, and his work as an Indigenous leader,” read a communiqué from the People’s Front in Defense of the Land and Water.

Samir’s death follows a disturbing trend of unsolved murders of environmental and human rights defenders, a majority of them Indigenous. A Global Witness report documents that in 2018, 14 land and environmental defenders were killed in Mexico. President Andrés Manuel López Obrador and his administration have vowed to address the problem. But one year after Samir’s murder, patience is running out.

Juan Carlos Flores believes that state-sanctioned projects and private investors benefit from a climate of impunity for attacks against environmental activists. Flores is a lawyer for the People’s Front in Defense of the Land and Water, of which Samir was also a member. With few safeguards in place to protect local advocates and a weak rule of law, companies can bypass grievance processes. There is little accountability for impacted communities.

“I think that the government has felt the pressure of our demands, but has decided not to give it attention,” Flores told LAND.

The pattern plays out across the country. Only a few weeks before Samir’s death, another community radio journalist, Rafael Murúa, was abducted and murdered in the state of Baja California Sur after criticizing the local municipal government on air.

“The government doesn’t want to provide protection, nor bring justice, so that this degree of impunity can deter other people [from protesting],” Flores adds.

In its rhetoric, the López Obrador administration champions Indigenous rights. While the administration has made symbolic strides, the 2020 federal budget included drastic cuts to programs that stimulate economic development among Indigenous groups.

“Deep down, the logic of the state, even under the 4T, continues to prioritize private projects,” said Jorge Aguilar, head of communications at Centro de Derechos Humanos Fray Francisco de Vitoria, a Mexico City-based human rights organization. The administration refers to itself as the Fourth Transformation of Mexico, or 4T.

“The 4T is mirroring the interests of the megaprojects from previous administrations, only now with an apparent best interest in mind for Indigenous communities,” Aguilar added.

As a resident of the Nahua community of Amilcingo, Samir advocated for Indigenous rights and the protection of the environment. While broadcasting for Radio Amiltzinko —a community-radio station that he co-founded in 2013— Samir gave local news reports and spoke out against the proposed development project. Its blueprints included a pipeline crossing through Samir’s hometown and across dozens of other Indigenous communities in the states of Morelos, Puebla and Tlaxcala.

The federal government under President Enrique Peña Nieto backed the MIP in April 2013. The project includes two thermoelectric plants and a 160-kilometer (100 miles) gas-line, with a total investment nearing $600 million. Mexico’s Federal Electricity Commission owns the infrastructure of the MIP, and awarded construction contracts to two Spanish-owned corporations, Elecnor and Enagas. Another Spanish company, Abengoa, would manage operations of the thermoelectric plant.

Early environmental assessments indicate scenarios of significant air, water, and land pollution. A study by the National Center for Disaster Prevention found the pipeline put affected territories near the Popocatépetl volcano at risk for landslides and chemical explosions.

Initially, AMLO declared that the MIP and other megaprojects would not be imposed on Indigenous communities. He later back-tracked, saying that scraping the project and reneging on financial commitments to external investors would result in massive losses for the federal government.

Samir knew that the MIP posed credible social and environmental risks to Amilcingo and surrounding areas. He believed that the project prioritized profit over the well-being of his community. At one of his last public appearances before his murder, Samir said that the multinational companies involved in the project first cared about “their capital and their money.”

Information sessions before the scheduled consultation vote described only the positive impacts of the project, while downplaying the environmental risks and socio-economic trade-offs—a factor that Samir vocally brought attention to in the community.

According to Juan Carlos Flores, the plebiscite ballots included positive coverage of the proposals, affecting the neutrality of the vote.

After Samir’s murder, the Morelos state prosecutor said he was pursuing six lines of investigation, including connections to organized crime, a labor conflict Samir had been involved in, and Samir’s role in the community radio station. The prosecutor hinted at potential suspects and readied apprehension orders. Intermittently, Samir’s family received brief updates from state authorities reassuring them of their commitment solve the case. But three months into the investigation, progress stalled.

In the meantime, Hugo Erik Flores (no relation), a former Morelos state delegate, continued to allege that Samir’s murder was unrelated to his journalism or negative remarks about the MIP, and was instead a casualty of organized crime.

Activists pushed for Mexico’s Attorney General to prosecute the case instead of the state prosecutor. They cited the national relevance of the case and the lack of resources at the state level. Advocates allege that Samir’s connection to the MIP is a line of investigation that has been unexplored, due to political interests tied to the project.

The López Obrador administration’s consultation practices have sparked controversy elsewhere. The government promotes projects like the Trans-Isthmus corridor and the Mayan Train as vehicles for sustainable economic development and cultural preservation. But advocates question the impacts on local communities.

The Mayan Train would cross the Yucatan Peninsula. It would threaten the region’s fragile ecosystems and the autonomy of communities along its route. Last year, a communiqué from the United Nations High Commissioner for Human Right stated that low rates of participation by Indigenous women, lack of transparency during information sessions, and irregularities during voting procedures characterized the consultation procedures in Yucatan.

The model of consultation entrusts the government to impartially inform communities from the top-down about the costs and benefits of development projects. Members of the National Indigenous Congress and the Indigenous General Council consider the Indigenous consultation process to be racist and paternalistic, due to its “lack of respect for the customs, traditions, and decision-making processes of Indigenous communities and popular organizations.”

Human rights defenders and journalists who speak out against the government’s development model are often targets of violence. Yet the government has failed in its duty to protect them. In 2012, Mexico established the Mechanism to Protect Human Rights Defenders and Journalists. It grants police protection, satellite phones, and panic buttons to journalists and human rights defenders who have been targeted for their work. But the Mechanism’s budget has been cut under López Obrador. People enrolled in the Mechanism say there is a lack of resources and ineffective implementation.

With mounting evidence that in many cases the government is directly or indirectly involved in attacks against human rights defenders and journalists, these measures are sorely lacking.

In Amilcingo, community members have not let their mourning and pain mask their outrage. Resistance to the MIP continues. In June 2019, after seven years in court, a federal court ruled in favor of the opposition and granted an injunction to temporarily halt construction on the MIP.

One year after Samir’s death, community members are urging for the creation of a special commission to bring new light to Samir’s case. In other cities and towns around Mexico, signs and pictures that render homage to Samir are ubiquitous.

Juan Carlos Flores says, “In his absence, the pain remains, but what also remains is that collective work and organizing.”