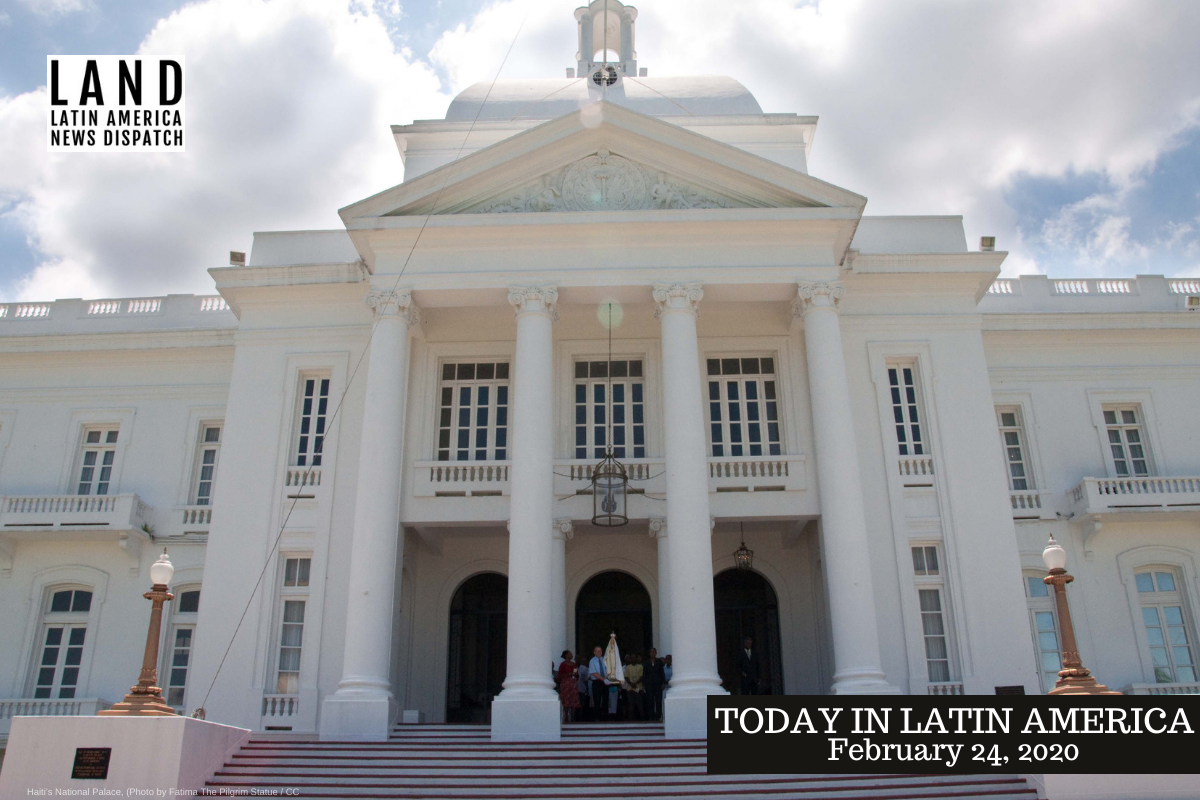 HAITI: Police officers protesting pay and working conditions disrupted the first day of Haiti’s Carnival. Police and military officers shot at each other outside the national palace. It remains unclear how many people were hurt in the gunfire. Police told the Associated Press that at least three among their ranks were injured and taken to the hospital, while a local radio station reported that at least one person was killed and 13 wounded.

Police officers are protesting after the government did not cede to their demands to increase salaries and rehire five officers who were fired after attempting to form a union. President Jovenel Moïse promised subsidized housing, pension money, and to double the amount of money loaded onto debit cards for police officers. Moïse reestablished the once-disbanded military in 2017, pledging to use the force to police the country’s border with the Dominican Republic and respond to disasters.

Hours after the shooting began, the government canceled the national Carnival.

ARGENTINA: Argentina and the International Monetary Fund (IMF) released statements Saturday stating that they will formalize Article IV consultations regarding the country’s debt. Argentine Economy Minister Martín Guzmán and IMF Managing Director Kristalina Georgieva met in Riyadh, Saudi Arabia during the G-20 talks this week. The consultations will give the IMF the opportunity to inspect Argentina’s accounts before reassessing the country’s bonds. Argentine President Alberto Fernández hopes to renegotiate a portion of the country’s $311 billion of foreign debt.

COLOMBIA: The Irish advocacy group Front Line Defenders reports that Colombia is the most dangerous place in the world to be an environmental or land activist. The group recorded the murders of more than 300 human rights leaders last year, and said that half of those activists had been involved in environmental movements. The Colombian non-profit Indepaz has recorded more than 40 murders of human rights leaders since January.

VENEZUELA: Inspector General Reinaldo Muñoz hired the U.S. law firm of Amsterdam & Partners to lobby on the issues of sanctions and human rights. Bob Amsterdam told The Associated Press that he could not comment on his work for Muñoz, but said that U.S. sanctions limit his ability to represent President Nicolás Maduro’s government. The firm Foley & Lardner dropped the same case last month after facing pressure from Florida Senator Rick Scott. Meanwhile, opposition leader Juan Guaidó told The Associated Press on Friday that he had a successful meeting with U.S. President Donald Trump and expects more U.S. sanctions to come soon.

JAMAICA: Six members of parliament could face charges for breaking Jamaican anti-corruption laws. The Integrity Commission Act requires lawmakers to formally declare their income, assets, and liabilities each year. Other reports suggest that the Integrity Commission’s head of investigations recommended the arrest of a “very senior government official” over gaps in a declaration from 2017.

PUERTO RICO: Former Education Secretary Julia Keleher will stand trial in Puerto Rico, not the U.S. mainland, following a federal court decision. Keleher faces bribery and fraud charges after she allegedly gave away school property in exchange for an apartment, among other accusations. Her attorney says she is innocent and argued that because she has become an unpopular figure in Puerto Rico, she would not receive a fair trial on the island. The trial is now scheduled for February 2021.

BELIZE: Thousands of teachers and union members marched in Belize City in support of a National Trade Union Congress (NTUCB) campaign to fight government corruption. Some lawmakers, including members of the opposition People’s United Party, were present. But NTUCB president Marvin Mora emphasized that the protest was meant to hold all politicians accountable, regardless of their party affiliations. The “Only the people can save the people” campaign includes six points for addressing corruption.

MEXICO: Hundreds of union members, environmentalists, students, and Indigenous representatives gathered in Mexico City to protest the Maya Train, a massive project meant to transport tourists around beaches, towns, and cultural sites in the Yucatan Peninsula. Construction is scheduled to begin this spring, but the project remains controversial. While supporters view it as a sound investment in the region’s economy, opponents worry it could cause irrevocable social and ecological damage. At this most recent march, protestors carried signs honoring Samir Flores Soberanes, an environmental activist who was killed a year ago Thursday.

UNITED STATES: Authorities arrested José Irizarry, a former Drug Enforcement Agency (DEA) narcotics agent, at his home in Puerto Rico. His wife was also arrested. Irizarry faces a 19-count federal indictment for conspiring to launder money for a Colombian drug cartel. Before the accusations against him became public last year, Irizarry was a star agent. The arrest comes only a week after another former DEA agent was sentenced to four years in prison for helping smuggle thousands of kilograms of cocaine into the U.S.

UNITED STATES: The San Diego County Sheriff’s Department is the first local agency to comply with subpoenas that U.S. Immigration and Customs Enforcement (ICE) sent to departments in five states. ICE demanded information from local law enforcement in Colorado, Connecticut, New York, Oregon and California. The administrative subpoenas are part of the Trump administration’s pressure on sanctuary jurisdictions that restrict cooperation with ICE. A lawyer from the San Diego-area ACLU said that complying with the request violates California law, and that immigration authorities should be required to show a court-ordered subpoena, not one signed by their own agency.