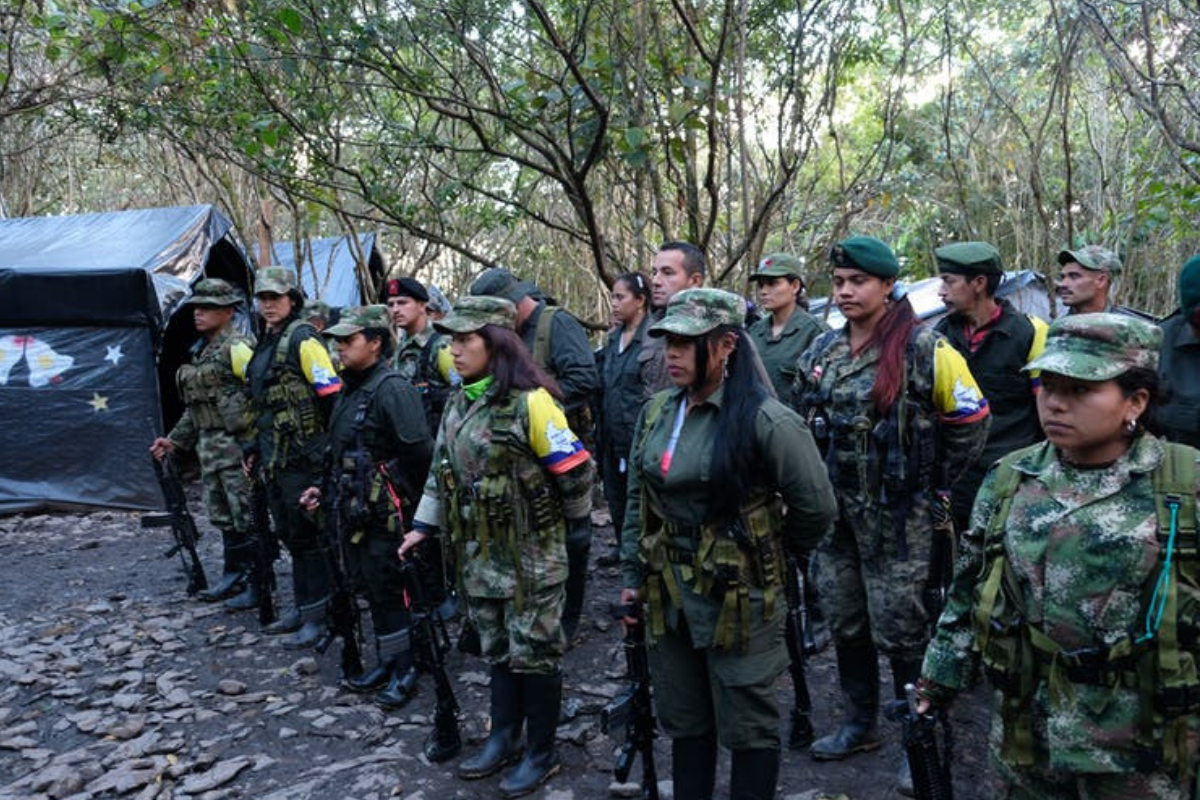 More than 2,000 women were processed through demobilization camps in Colombia as the government transitions disarmed FARC guerrillas back into civilian life, Jan. 18, 2017. (Photo by Kaveh Kazemi/Getty Images)

Women made up nearly a quarter of the 13,000 guerrilla fighters disarmed by Colombia’s 2016 peace accord with the Revolutionary Armed Forces of Colombia, or FARC. Though implementation has been halting, the landmark peace deal officially ended Colombia’s 52-year armed conflict with this Marxist rebel group.

But even before the peace deal more than 19,000 fighters —including thousands of women— had abandoned different Colombian guerrilla and paramilitary groups, voluntarily or after being captured by the army.

Now, the government is expanding its entrepreneurship program to cover all 2,990 female FARC fighters disbanded under the 2016 peace deal.

So I wanted to check in on past beneficiaries to see how they were faring. For seven months in 2018 and 2019, as part of my dissertation research on Colombia, I conducted in-depth interviews with 12 retired female guerrilla fighters to document their transition back into civilian life.

They’re not doing so well.

In Colombia, as in other conflict zones, rejoining society after war is generally more challenging for women.

Whether they served as soldiers, cooks, spies or sexual partners to male fighters, women militants are frequently seen as abnormal, or unfeminine. Fighting violates traditional expectations of women as the peaceful and nurturing gender.

In Colombia, many of the women I interviewed said they were shunned when they returned to civilian life.

“Even my family thought the worst of me—that I had become bloodthirsty or bad,” said a 33-year-old woman who was forced by her father to join the FARC when she was 17.

Other women reported feeling similar social exclusion. The perception of stigma prevented them from fully engaging with their local communities. All hid their pasts. Some avoided interacting with neighbors, afraid they would discover their secret.

This is the opposite of the government’s intention with the small business program, which aims to promote social interactions. Funded by the Colombian government, USAID and the United Nations and designed following U.N. guidelines, entrepreneurship is supposed to help former insurgents gain community acceptance, take control over their circumstances, rejoin the labor market and reduce poverty.

Promoting entrepreneurship is a popular development strategy for women, not just in conflict zones but also in poor countries with entrenched gender inequality. Since 2001 the World Bank has launched micro-lending and small grant programs in South Sudan, Liberia, Afghanistan, Haiti and Kosovo, among others.

However, their effectiveness is unproven, and some studies find entrepreneurship does not meaningfully improve women’s lives.

Running a home business seemed to isolate the former insurgents in my study. More than half told me they were unable to form the kind of social support system that research shows is necessary for reintegration.

She was particularly worried that if neighbors learned about her history as an rebel fighter, they would tell the gang members who control her neighborhood, endangering her life.

This social isolation effectively trapped some women in violent relationships. One felt that working from home kept her from meeting new people who might have become a protective network.

“He punched me. I still have the bruise,” she said.

I could see the mark on her cheek. The attack was recent. The woman told me she hadn’t left the house in 15 days.

Succeeding in business is difficult for anyone, in any country, under any circumstance. Research shows the chances for success are even lower for poor female entrepreneurs.

My interviews in Colombia suggest that the Colombian government’s reliance on entrepreneurship may make female ex-insurgents financial situation even more precarious than it would otherwise be because they lack the safety net of formal employment.

“I was not used to having a business, so I gave credit to many people,” said one ex-combatant whose government seed-funded grocery store in Medellin, Colombia went broke.

When former insurgents who receive government benefits fail, they do not get another loan. They must find a job on their own.

Another problem I identified with Colombia’s governmental entrepreneurship program was that it restricts grant recipients to low-skill jobs that may not align with an individual’s experience, skills and interests.

“My dream was to study dentistry, but I did not have a high school diploma,” a woman who was a dentist in the FARC told me. “I had to do tailoring.”

Sewing and selling underwear and jackets helped the former fighter support herself and her son through a divorce. But the work was not meaningful to her, and it did not further her long-term educational and career goals.

Running a small business at home also reinforced unequal distribution of family responsibilities for many of the women I interviewed. Because they were in the house, they were expected to do all domestic chores and childcare—all while cooking, sewing or selling food.

In some ways, however, Colombia is actually ahead of the game. Gender-specific policies are in short supply in war zones globally.

“Peace agreements are still adopted without provisions considering the needs and priorities of women and girls,” said U.N. Secretary-General Antonio Guterres in October 2019.

He said a “pitifully small” amount of aid to fragile and post-conflict nations – just 0.2% – goes to “women’s organizations.”

Colombia’s accord tried to do better. At the FARC’s insistence, women were on the negotiating team. The accord specifically commits the state to promoting equal rights for women and men.

But my research suggests that making peace work for female insurgents will take more than a well-crafted accord.

Stephanie Simmons Zuilkowski, a professor of international and multicultural education at Florida State University, contributed research to this article.