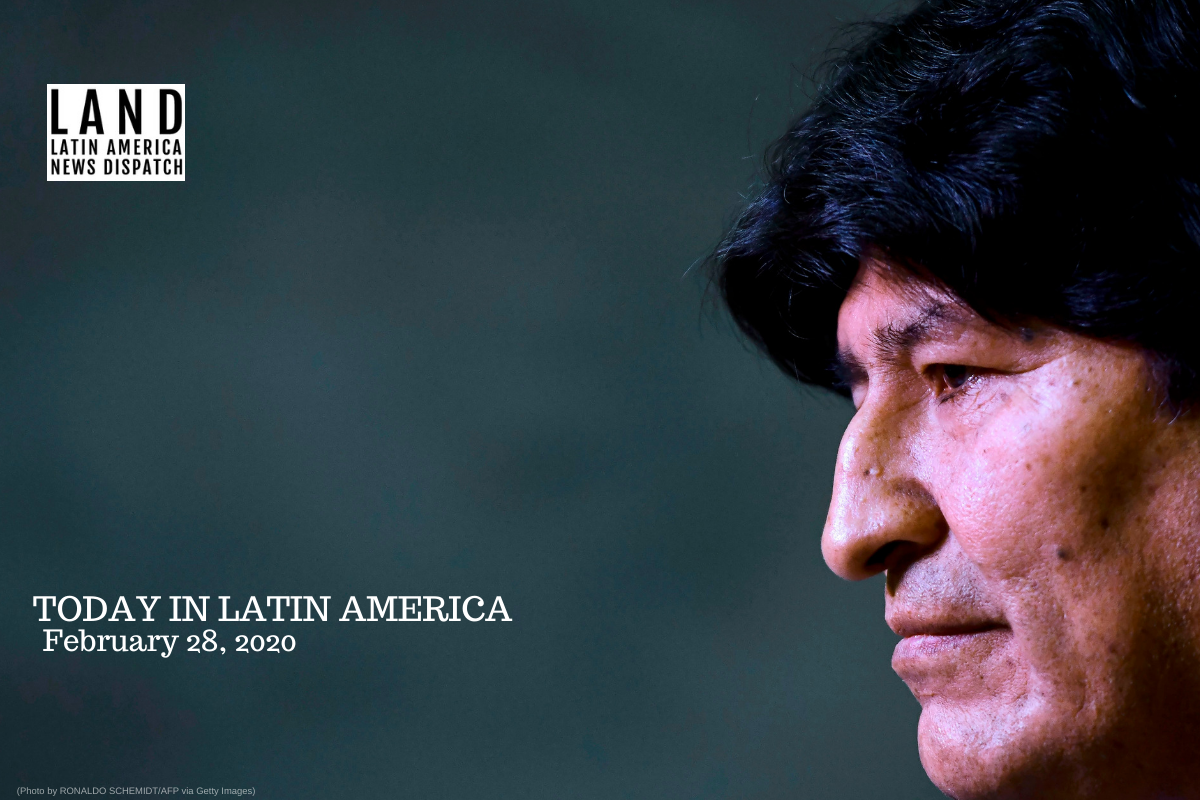 BOLIVIA: New research suggests that the Organization of American States (OAS) analysis of supposed electoral fraud in Bolivia is “deeply flawed.” In The Washington Post, researchers John Curiel and Jack R. Williams argue that statistical evidence does not back up the claims of fraud.

Bolivia is preparing for a May presidential election after president Evo Morales was ousted in a military coup last November. Following the country’s October elections, Bolivians protested alleged electoral fraud by Morales and the Movimiento al Socialismo Party (MAS). An OAS audit largely supported the claim of fraud. The military forced Morales to resign, and he left Bolivia to seek asylum in Mexico. Interim president Jeanine Áñez’s administration has charged Morales with terrorism and sedition and has barred him from participating in the May election.

The OAS reported that fraud occurred when the preliminary count halted at 84% of the votes. Before the cutoff, Morales had a 7.87% lead. When the count resumed, his margin had surpassed 10%. According to the Bolivian constitution, if a candidate does not have the outright majority, they need more than 40% of the votes and a 10% margin to win.

“There is not any statistical evidence of fraud that we can find — the trends in the preliminary count, the lack of any big jump in support for Morales after the halt, and the size of Morales’s margin all appear legitimate,” Curiel and Williams write.

ARGENTINA: More than 1,000 people protested on Thursday to demand that Argentinian authorities provide the details about the events that led to the death of Carlos Orellano, a 23-year-old whose body was found in the Paraná River. Orellano was last seen at a nightclub. There are allegations that the nightclub’s security guards used violence when Orellano was entering a “prohibited” area and police officers supposedly delayed the investigation.

COLOMBIA: Violence is “endemic” in Colombia and it is essential that the country addresses the structural causes, according to a new United Nations Human Rights Office (OHCHR) report. The OHCHR documented evidence of collaboration between Colombian security forces and illegal armed groups. The report also documents the stagnation of the peace process under President Iván Duque, and deployment of military for police matters, particularly in rural areas with high levels of violence. Investigators registered 36 massacres with a total death toll of 133 people in 2019, the highest number in the country since 2014. Additionally, the report showed that hate crimes against female human right defenders rose 50% in 2019 compared to the year before. Duque criticized the report as biased because it does not mention additional security measures that his government has implemented.

CUBA: Senator Bernie Sanders was on the front page of the Cuban newspaper Granma following his comments about the Cuban education system. During an interview on 60 Minutes, Sanders said that the while he views Fidel Castro as an authoritarian, the Cuban leader made advances in health and literacy in the country. The newspaper clarified that Sanders’s brand of socialism is not akin to that of Cuba or Venezuela, but more similar to Nordic countries like Denmark and Sweden. The column also warns of backlash from “the most extremist sector of Cuban-Americans in South Florida.” Both Democrats and Republicans criticized Sanders for his comments about Castro, who defended his belief that “teaching people to read and write is a good thing,” during the CNN town hall on Monday.

EL SALVADOR: President Nayib Bukele is expected to veto a law that El Salvador’s Congress passed on Wednesday, allowing prosecution of crimes from the Civil War. Supporters say that the law will ensure perpetrators do not receive amnesty for their crimes while opponents argue that the opposite will occur. Some human rights organizations oppose the law. Bukele has called it an “amnesty that protects war criminals.” The law, which narrowly passed, would also include reparations to victims, and access to military and police archives.

MEXICO: The National Institute of Statistics and Geography announced that Mexico’s GDP contracted 0.1% in the fourth quarter of 2019. After the announcement, the Bank of Mexico (Banxico) cut its growth forecast for 2020. The central bank now predicts GDP growth of between 0.5% and 1.5% this year, a reduction of 0.3% at both ends of the range in comparison to a prior forecast in November. According to the central bank, other factors affecting growth negatively are global trade tensions and the outbreak of the coronavirus.

MEXICO: The Espinosa Yglesias Studies Center  published a study on Thursday that compares social mobility in Baja California, a state that borders the U.S., and the state of Chiapas, bordering Guatemala. The study found that while 82% of the poorest residents of Baja California are able to get out of poverty, 77% of Chiapas residents born into poverty get stuck at the bottom of the socioeconomic pyramid. The study attributed the gap to very different growth rates between the north and south of the country. In contrast, Chiapas has had negative growth rates in GDP per capita from 1990 to 2016.

UNITED STATES-MEXICO: The Mexican government is worried about a U.S. Supreme Court ruling that will not allow the parents of Sergio Hernández, a 15-year-old Mexican boy who was killed in 2010, to sue Jesús Mesa, the U.S. border patrol agent who shot him. The government expressed “deep concerns about the effects this decision will have on other similar cases, in which Mexican citizens have died from gunshots fired by U.S. agents towards the Mexican side.” Since Sergio Hernández was on Mexican soil when he was shot, and Mesa was on the U.S. side of the border, the court ruled that the parents could not use US courts to sue Mesa. A lawyer for the family of Sergio Hernández warned the ruling would “promote a Wild West attitude on our border.”