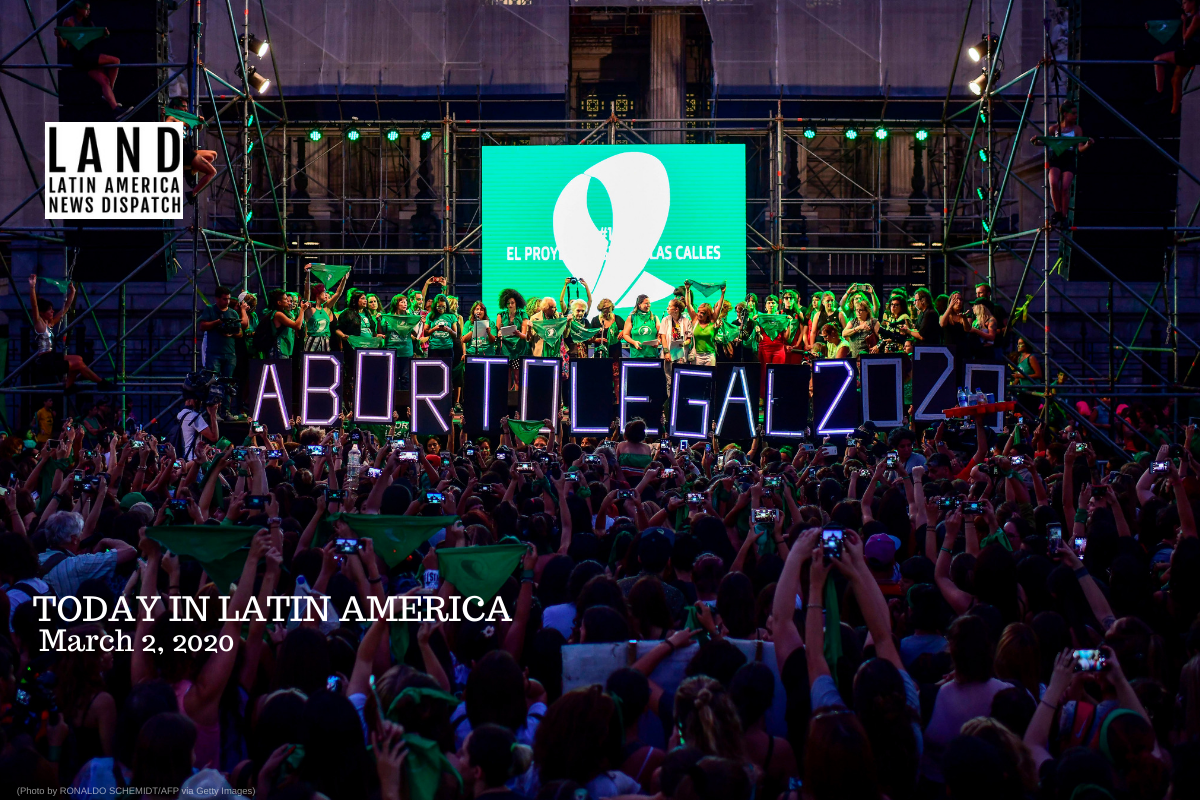 Thousands of women hold green scarves demanding the the decriminalization of abortion as they protest at Argentina's National Congress in Buenos Aires on February 19, 2020. (Photo by RONALDO SCHEMIDT/AFP via Getty Images)

ARGENTINA-COLOMBIA: Argentine President Alberto Fernández told the country’s congress that he will introduce a bill to legalize abortion within the next 10 days. Meanwhile, Colombia’s Constitutional Court is set to rule on a case as early as today that would expand abortion access in the first months of pregnancy.

Argentina came close to legalizing abortion in 2018 when the feminist National Campaign for Legal, Safe, and Free Abortion introduced a bill to Congress that passed the House of Representatives, but failed in the Senate. The near-victory sparked a “green tide” of pro-abortion activism across the region. At his first annual address to congress, Fernández told representatives, “Society in the 21st century needs to respect the individual choice of its members to freely decide about their bodies.”

Colombia may rule to legalize abortion through its courts rather than its legislature. The country’s Constitutional Court is hearing a case brought by abortion opponent Natalia Bernal, who hoped the court would eliminate the exceptions allowing abortion in certain cases. Instead, it appears the court may legalize abortion.

In Latin America and the Caribbean, abortion is currently only legal in Cuba, Guyana, Uruguay, and parts of Mexico–including Mexico City and Oaxaca.

URUGUAY: Luis Lacalle Pou was sworn in as president on Sunday, ending 15 years of left-leaning rule by the Broad Front coalition. Lacalle Pou, a center-right politician, won the country’s November run-off election against Daniel Martínez. Analysts attributed Lacalle Pou’s win to an economic downturn and increased homicide rates. At his inauguration, Lacalle Pou promised, “to promote what was done well (and) correct what was done badly.”

VENEZUELA: Approximately 200 pro-government vigilantes ambushed a march led by opposition leader Juan Guaidó in Barquisimeto on Saturday. A photograph Guaidó’s team provided to The Associated Press shows a gunman aiming his pistol at the demonstrators, including the opposition leader. Later in the day, a 16-year-old protester was injured.

DOMINICAN REPUBLIC: The first case of coronavirus in the Caribbean was confirmed in the Dominican Republic after an Italian national was admitted to the hospital. Caribbean leaders met yesterday to discuss how to confront the virus. If the virus spreads in the Dominican Republic, which has a population of 11 million and shares a border with Haiti, it could be a disaster for both countries. The country’s health minister said that the 62-year-old Italian hospitalized Saturday most likely exposed others to the virus. Authorities barred all incoming flights from Milan for the next 30 days.

NICARAGUA: Nicaraguan poet and priest Ernesto Cardenal died yesterday at the age of 95 due to heart failure. The four-time Nobel Prize nominee’s death was announced by poet Gioconda Belli and his burial will be in Solentiname this upcoming Saturday. Cardenal supported the leftist Sandinista rebels and later served as cultural minister during the first administration of Daniel Ortega. Former Pope John Paul II, who believed clerics should not hold political roles, suspended Cardenal from the priesthood in 1985 for supporting the Nicaraguan revolution. In 2019, Pope Francis lifted the suspension.

MEXICO: At the National Autonomous University of Mexico (UNAM), students have taken over 13 schools and departments, calling a strike in protest of increasing violence against women. Protests in Mexico spiked after the murders of Ingrid Escamilla and Fátima Aldrighett. A 24-hour women’s strike is planned for March 9. Authorities have yet to remove any of the protestors at UNAM.

UNITED STATES: The Supreme Court argues a case today that could lead to the deportation of asylum seekers who just entered the country, as well as those who have been living in the US for up to two years. Just this weekend, a panel of judges from the 9th Circuit Court of Appeals halted the Trump administration’s Remain in Mexico policy for a few hours. The court reversed its decision after the Justice Department argued that the suspension could cause chaos at the border.

U.S.-MEXICO: Suspected Russian spy, Héctor Alejandro Cabrera Fuentes, a Mexican scientist from the National University of Singapore, is set to face an espionage trial in the United States. Court documents show that Fuentes was working as a lead researcher studying cardiovascular diseases when he was recruited by Russian official last year. U.S. Customs and Border Protection apprehended Fuentes while he was traveling to Mexico and he admitted to being directed by the Russian government.