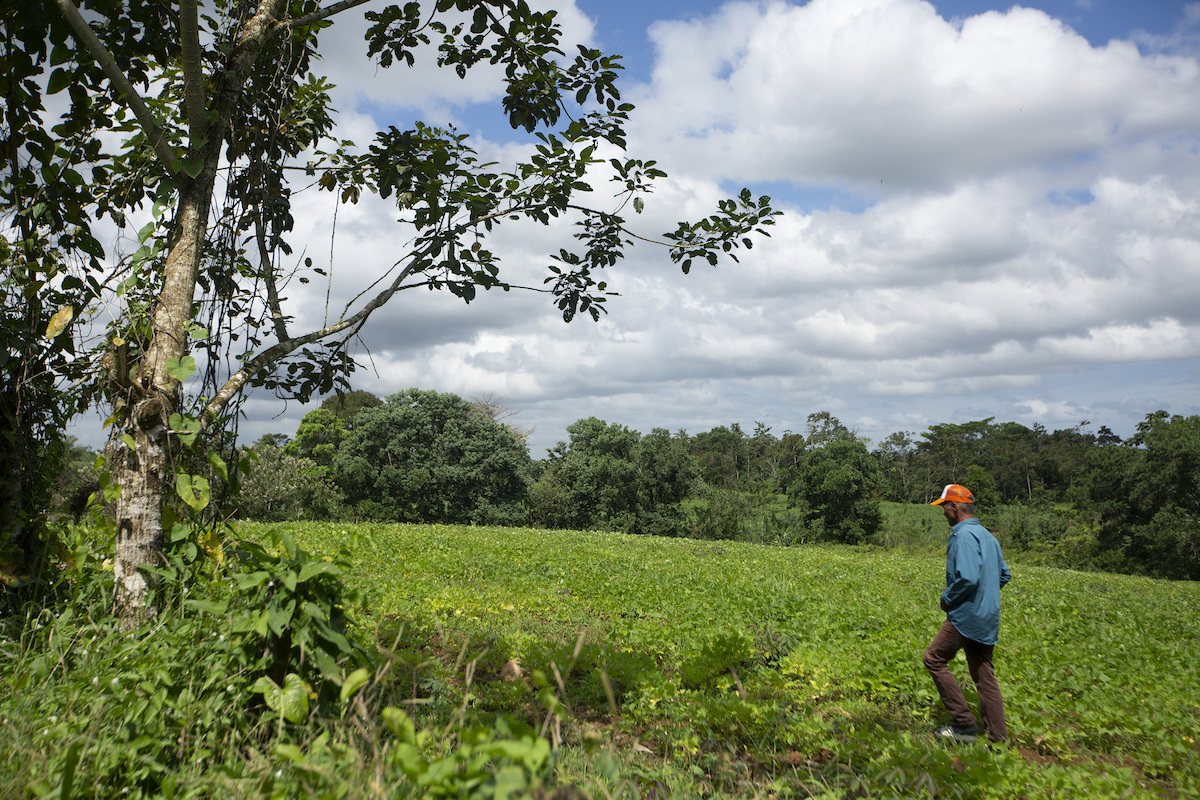 In this February 10, 2020 photo, Nicaraguan refugee Luis Uriarte walks through his bean field near Upala, northern Costa Rica, where several hundred Nicaraguan refugees, including Uriarte, are carving out an existence with machetes and a firm belief that they could be jailed or killed if they return too soon to their country. (AP Photo/Moisés Castillo)

UPALA, Costa Rica (AP) — In Costa Rica’s rural north, several hundred Nicaraguan refugees are carving out an existence with machetes and a firm belief that they could be jailed or killed if they return too soon to their country.

Last October, a small vanguard of displaced Nicaraguan farmers moved onto about 289 acres (117 hectares) of rented land that hadn’t been farmed in 40 years. Their goal was to feed themselves the only way they knew how and establish a safe place to wait out the repression of Nicaraguan President Daniel Ortega.

They slept on the ground under tarps, awoke beside snakes and worked from dawn to dusk clearing sections of the rolling land and planting banana, beans, yucca and corn.

They are a fraction of the approximately 75,000 Nicaraguans who have sought asylum in neighboring Costa Rica since Nicaragua plunged into a political crisis in April 2018 —officials believe that number could reach 125,000, or more than 2% of the population, by the end of the year— but their initiative, hard work and goal of self-sufficiency have drawn the attention of the United Nations and the respect of their Costa Rican hosts.

Leading this community of refugees is Francisca Ramírez, a 43-year-old grandmother better known as “Doña Chica,” a nickname that dates to her childhood and foretold a woman who gets things done. The farmer and activist from Nueva Guinea, Nicaragua has contacts in Washington and Brussels that she leverages at every opportunity to try to improve the refugees’ situation. When U.S. Secretary of State Mike Pompeo visited Costa Rica last month, Ramírez was one of the select few Nicaraguans who met with him.

Ramírez established this settlement on jungle-covered farmland and has set up several smaller ones around northern Costa Rica. They are raising their own food, providing the two things she says are critical for any refugee: a reliable food supply and the dignity of work.

“I have seen people cry tears because to get an enchilada, a plate of food, they had to have their picture taken,” Ramírez said, referring to some aid organizations. “That is hard. It’s important to look for mechanisms, that there is a mechanism to allow people to do what they know how to do.”

What Ramírez and some 57 other families here know is farming. The shimmering knee-high bean plants stretching to the horizon prove it. Every day she receives calls from Nicaraguans hoping to move to one of her sites from either within Nicaragua or from other parts of Costa Rica. Recently, she has had to refuse them, explaining that until she and the others have established their food supply they can’t accept more people.

There are also security concerns. Ramírez has been a thorn in Ortega’s side for years and has a demonstrated ability to mobilize masses. She’s often mentioned in the same breath with murdered Honduran environmental activist Berta Caceres. Newcomers are vetted through her network of contacts inside and outside Nicaragua.

Most of the refugees now residing with Ramírez came from southern Nicaragua and have connections to her Farmer Movement. When they rose up in April 2018 to support university students whose protests were being violently repressed, the farmers were already veterans of years of government persecution themselves for their opposition to Ortega’s ambitious, but never built, canal. It would have connected the Pacific Ocean and Caribbean Sea, but also appropriated many of the farmers’ lands.

The Inter-American Commission on Human Rights found that 325 people were killed in those 2018 protests, which Ortega characterized as a failed coup attempt. The government has labeled those who participated in roadblocks around the country as terrorists. Unsolved killings that human rights groups attribute to paramilitary groups acting on behalf of the government have continued.

Ramírez left her farm, livestock and a fleet of trucks that carried farmers’ produce to market on Sept. 15, 2018 and walked for five days to enter Costa Rica at a blind spot on their shared border. She knew her life was in danger or at the very least she would arrested with hundreds of others. She requested asylum, spent time in the capital and worked at a market in another city.

Like most refugees she struggled to get on her feet in a new country. Costa Rica has been supportive and some of its citizens have played a critical role in what she’s accomplished, Ramírez said.

One acquaintance suggested she rent land to farm and loaned her money to buy a truck. Another provided her name and signature to help Ramírez rent the farmland. Still another gave them a pigpen to set up on their land. The government has streamlined the process to get refugee children enrolled in schools and most of the refugees in her community have registered for asylum.

Still, piecing together an existence while they wait for their harvests to come in has been difficult. In Costa Rica, food, rent and transportation are double or triple what they cost in Nicaragua. Meals have been skipped. Shelter for most remains primitive. Some have had difficulty accessing health care.

“There are thousands of Nicaraguans in different parts of Costa Rica who don’t even have a place to camp,” Ramírez said. “We’ve made this effort to find mechanisms so that the people at least have a place to sleep and a place to work.”

She has thought of establishing more settlements for refugees: one for Nicaraguan artisans; another a dairy to produce Nicaraguan-style cheese.

This month, Kelly Clements, United Nations Deputy High Commissioner for Refugees, visited Ramírez’s community of refugee farmers. The UNHCR provided the seed and tools for the refugees to plant about 50 acres of beans.

“This isn’t about humanitarian aid or handouts,” Clements said. “This is really about providing the tools, the facility, the ability for people to be able to farm, to take care of their families, to rebuild their lives.”

Achieving self sufficiency would also lessen the burden on communities in Costa Rica receiving the refugees, she said. That’s important in a country with an unemployment rate that has risen above 12% and a political opposition that is pressuring the government to close the doors.

UNHCR has also launched a pilot program with Costa Rica’s social security system that would allow 6,000 asylum-seekers to enroll in the country’s health care network and access public medical centers like any Costa Rican.

On a recent afternoon, Francisco Urbina Hernández was putting up a shelter at the encampment for himself and his 15-year old son. Urbina had recently been released from prison in Nicaragua after serving 15 months of a five-year sentence for participating in anti-government demonstrations.

Within days of his release he heard there was a plan to kill him so he left for Costa Rica.

Julio Cesar González, 55, brought two of his sons to seek asylum in Costa Rica. His opposition to Ortega dates to his participation in the Contras in the 1980s — he still speaks reverently of U.S. President Ronald Reagan.

González protested beside Ramírez over the canal and then again in support of the students in 2018. Even though it’s not his land he left behind in Nicaragua, González said being able to farm in Costa Rica has helped. His older son is already studying organic agronomy in a Costa Rican university.

“We didn’t come to be government charges,” he said.

González and others all say they would return to Nicaragua tomorrow if the situation allowed it. The food they are growing is not only for their day-to-day needs. They plan to stockpile enough to tide them over until their first crops planted back in Nicaraguan soil can be harvested.

In the meantime, González tries to take advantage of any training offered to the refugees that could help him work back in Nicaragua.

“The important thing is the knowledge we’re acquiring,” González said. “It means that we’re going to arrive different in Nicaragua.”