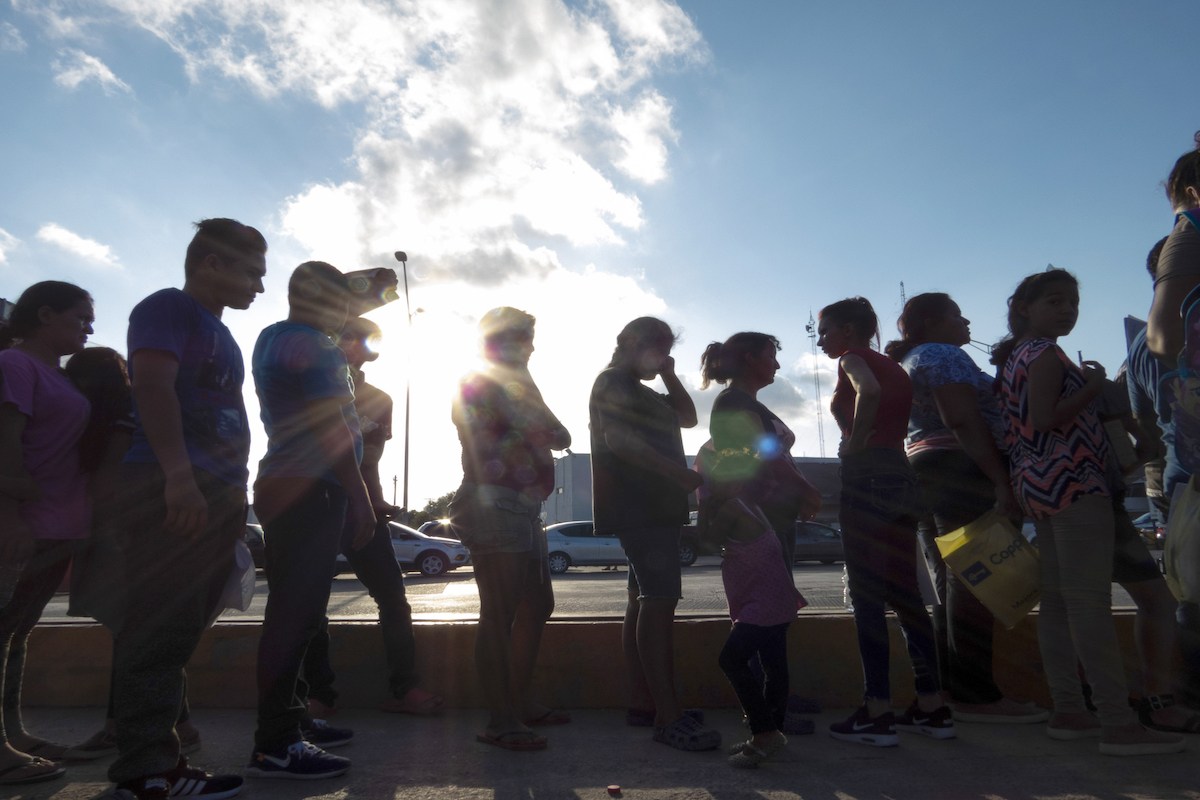 FILE – In this October 5, 2019 file photo, migrants seeking asylum wait in line with their case paperwork during a weekly trip by volunteers, lawyers, paralegals and interpreters to the migrant campsite outside El Puente Nuevo in Matamoros, Mexico. (Denise Cathey/The Brownsville Herald via AP, File)

MATAMOROS, Mexico (AP) — Legal documents spilled from the arms of attorney Charlene D’Cruz as she led a Honduran mother cradling a limp toddler across the Rio Grande bridge.

The asylum-seeking mother needed to get her child, who had life-threatening sepsis, to a Brownsville hospital. D’Cruz successfully argued with border officials, cajoling them into allowing a humanitarian entry for the girl.

It was another must-do task for D’Cruz, a linchpin in an unusual movement in the U.S. justice system: Attorneys who have been operating along the border for years, often in small practices, are getting help from high-dollar corporate firms that are relatively new to the scene.

The largely pro bono efforts come as the most restrictive changes in asylum and refugee policies in decades are leaving immigration attorneys across the U.S. buried in cases.

D’Cruz works from a no-frills office with a paper sign that reads: Proyecto Corazón, or Project Heart. The Mumbai-born Indian native speaks Spanish, Portuguese, French and English as she weeds through the cases of adults who come to her for help from the nearby squalid camp of up to 2,500 asylum seekers. D’Cruz assists in farming out work to everyone from paralegals and translators to law school students and seasoned corporate attorneys.

“I am the front line,” D’Cruz said. “People pour into my offices.”

D’Cruz gave up her own comfortable Wisconsin digs, where she had steady phone and Internet service, predictable hours and no frayed nerves from nearby cartel violence, to do this work.

Many attorneys have been answering the call to take up cases at the border. Some were drawn by surging numbers of migrant children coming across the border without parents during a 2014 crisis. Others were parents who couldn’t stand the spectacle of parents being separated from their children under a more recent Trump administration policy. Now, still more say they are sickened by the sight of desperate asylum seekers.

What happens to the immigrants is up in the air. Last month, a federal court in San Francisco issued a halt to the program that sent thousands back to Mexico. That ruling will affect cases all along the border, and three-fourths of the asylum-seekers waiting in Mexico have cases pending in Texas. The federal government has not yet said whether it will ask the full panel of the U.S. Ninth Circuit Court of Appeals to re-examine the issue or whether it might appeal directly to the Supreme Court.

Some attorneys helping with the cases come from some of the biggest names in corporate law: Jones Day, Gibson, Dunn & Crutcher, Akin Gump and Haynes and Boone.

Accustomed to working in glitzy downtown offices or in dignified courthouses of pink granite, corporate attorneys fly to Brownsville and other border cities, where they argue cases in sprawling tent courts that were set up by the federal government across the river from Mexico. There, they have been taking positions alongside clients in front of modest plastic and metal folding tables, according to The Dallas Morning News.

The tent courts and the need for attorneys are directly connected to the Trump administration’s Remain in Mexico policy, also known as the Migrant Protection Protocols, which requires that asylum seekers wait across the border for their immigration cases to be heard. The fate of the 61,000 people with cases who have been stuck across the border remains unknown.

The asylum seekers have been living in camps near the international bridge in this city of 500,000 in a Mexican state the U.S. government deemed so dangerous that it is a no-travel zone for U.S. residents. When their cases were heard, they were escorted across the border.

The judges are hundreds of miles away in Fort Worth courtrooms, and the hearings have been taking place by video conferencing. Government attorneys are usually beamed in from immigration courtrooms in other cities to argue their cases. But for the migrants to get the representation they need, the attorneys need to go to them.

“The country has gone through cycles of tolerance and intolerance in who we would take,” said Rick Halperin, director of the human rights program at Southern Methodist University. “Now, we are in an intolerance cycle. The need for lawyers to help is greater. Rule of law and due process, it is like religion to them.”

Adding to the difficulties for immigration attorneys are constantly shifting policies on how asylum rules are applied.

“Due process has been eviscerated here,” D’Cruz said. To fight back, D’Cruz has some attorneys working remotely from their home cities to assist immigrants with asylum petitions.

Of the more than 61,100 asylum seekers who have been forced to wait across the border for their cases to be heard, about 5% had legal representation as of January.

About one-third of asylum seekers awaiting the outcome of their cases in the U.S. have attorneys, according to the nonprofit Transactional Records Access Clearinghouse at Syracuse University.

A spokesman for U.S. Customs and Border Protection said in a written statement that the agency is “unaware of any issues preventing aliens under MPP from receiving legal assistance.” Attorneys, as long as they have legal travel documents, have nothing preventing them from meeting clients in Mexico, the spokesman said.

D’Cruz moved to Brownsville in September, leaving behind her small Wisconsin immigration practice for work through the legal foundation Lawyers for Good Government, where Proyecto Corazón is housed. In Matamoros, her first task was to help with crowded legal workshops. There, asylum seekers could learn how to file asylum applications and represent themselves in court. A lucky number would eventually receive full legal representation — help that accelerates the odds of victory.

Among those listening was a Guatemalan man who would later be connected to Dallas lawyers at Haynes and Boone. In an interview with The Dallas Morning News, he said he was beaten by national police in 2019, and when he tried to file a complaint against them, he was told he deserved the beating simply “por ser gay” — for being gay.

Dressed casually in sport clothes with a baseball cap pulled low to his brows, the Guatemalan said he was immensely grateful for the lawyers, who have met with him in Matamoros and at the tent courts in Brownsville. “The first attorneys I spoke to said I had to go over there (to Texas). They said it was too risky for them to come over to me.”

Haynes and Boone represents 25 asylum seekers who are in Matamoros and has taken other cases, including those involving separation of children from parents.

“We are protecting the integrity of the legal system, due process and the rule of law,” said Luis Campos, one of the firm’s top providers of pro bono hours from the Dallas office. “We have obligations to those individuals that are rooted in the Constitution and our own international agreements.”

Campos and colleagues like Brent Beckert travel regularly to the Rio Grande Valley. Beckert said he’s motivated by the constitutional challenges to due process with asylum cases and previous cases he worked involving family separations. “It is one of the most acute situations we’ve seen,” he said.

Beckert said the attorneys volunteering their time come from all across the political spectrum.

“The people who work on these asylum cases are those who voted for (Donald) Trump and some who didn’t,” he said. “Some are for the (border) wall and some are not. Even today, these are people who have rights under the law.”

Many attorneys say they’re inspired by their personal backgrounds. Beckert’s family is Jewish. He’s well aware of the persecution of Jews by Nazis before and during World War II. Campos is the son of a Mexican immigrant mother and grew up in El Paso.

At Jones Day, corporate attorneys more accustomed to patent litigation and bankruptcy law have been making a large effort in the border city of Laredo, where a special unit has been operating since 2017. Vinson & Elkins, Gibson, Dunn & Crutcher and Arnold & Porter take part in immigration work, too, in other locations.

Efren Olivares, the nonprofit’s director of the racial and economic justice program, sprang into action when the Trump administration began separating children from their immigrant parents in 2018—a policy that attracted global criticism.

That year, Olivares would regularly hold sidewalk news conferences outside the courthouse in McAllen.

“From the very first time it made the news, we were hearing from lawyers, ‘What can we do?’ We were underwater with cases. Then, we were overwhelmed by lawyers.”

“We lawyers are so privileged with our skill set, and in this moment of need, we need to use those skills,” he said.