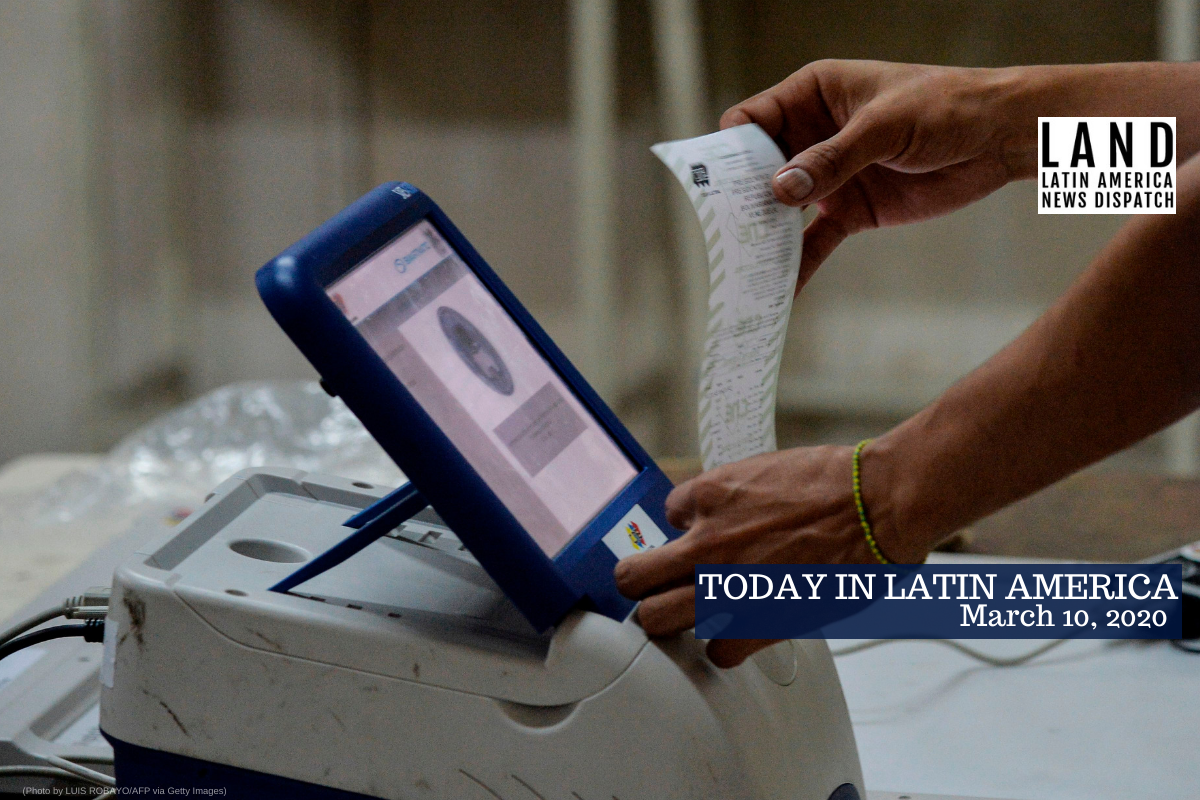 An election official prints the result of the voting of an electoral machine during the vote counting at a polling station on election day in Venezuela, on May 20, 2018. (Photo by LUIS ROBAYO/AFP via Getty Images)

VENEZUELA: Venezuela’s National Election Authority (CNE) announced yesterday that its main warehouse burned down over the weekend. According to CNE President Tibisay Lucena, 582 civil registry computers, 49,408 voting machines and 400 electronic ballots were destroyed. The government maintained that the fire will not affect legislative elections later this year. Authorities have been asked to investigate the cause of the fire.

President Nicolás Maduro won a 6-year term in a highly contested 2018 election. At least 50 countries have backed opposition leader Juan Guaidó as the legitimate president of the country. Elections for the National Assembly are expected sometime this year, but an official date has not yet been set. The National Assembly is currently controlled by the opposition.

CHILE: Over $15 million was stolen from an armored truck at Santiago’s airport yesterday. Seven to ten gunmen assaulted the armored vehicle as guards were loading it. They fled in a truck marked as a courier, according to police. Reports indicate that the gunmen bypassed airport security measures and knew the schedule of the armored vehicle. Authorities are currently searching for two vehicles.

COLOMBIA: Colombian authorities say that eight people were killed in Venezuela before their bodies were abandoned on Sunday on the Colombian side of the border. Cúcuta Police Chief, José Luis Palomino, said yesterday that the “first hypothesis” is that the Colombian ELN guerrillas confronted members of “Los Rastrojos,” a Venezuelan paramilitary group. “Los Rastrojos” then brought the corpses of their killed combatants back across the border and dumped them outside a school in the outskirts of Cúcuta. The Colombia-Venezuela border is heavily contested by Colombian armed groups vying for control of illegal markets.

COLOMBIA: Ecuadorian hacker, Daniel Bajaña, died of respiratory sickness yesterday in the city of Cali. Bajaña was one of the few convicted for the espionage scandal on government peace talks with FARC rebels. Bajaña was employed by Andrés Fernando Sepúlveda Ardila who was sentenced to 10 years in prison for hacking the emails of top politicians. Sepúlveda and Bajaña hacked the emails of politicians and government officials to gather material to slander the peace negotiations.

Bajaña’s lawyer said on Twitter that his defendant “took to the grave with him big secrets on the country’s most scandalous episode.”

HAITI: The US government has elevated Haiti’s travel advisory to level 4 “due to crime, civil unrest, and kidnapping.” Now, the Caribbean country is facing the US State Department’s most restrictive warning: “Do not travel.” The new report says “violent crime, such as armed robbery and carjacking, is common. Kidnapping is widespread. Victims have included U.S. citizens.” Last week, Haiti’s new Prime Minister, Joseph Jouthe, said the country’s current socio-economic situation is “precarious” and could lead to a “humanitarian disaster.”

COSTA RICA: Concerts, parades and any other mass gatherings are now suspended in Costa Rica, President Carlos Alvarado announced yesterday. He said his government is seeking to avoid the Novel Coronavirus from spreading to crowds. Some big concerts have already been cancelled. Soccer games will be held with empty seats, as fans will not be allowed into the stadiums. People can still attend religious services, and go to theaters and cinemas. Authorities recommend restricting access to visitors who display flu-like symptoms. Alvarado is also instructing public workers to work from home as a way to encourage the private sector to do the same.

GUATEMALA: Authorities at the Guatemala-Honduras border will start to take the temperatures of arriving migrants and block their entry if they have flu-like symptoms. President Alejandro Giammattei’s decision came as a new caravan of immigrants traveled through Honduras. He said everyone in the caravan will be screened and that the country is allowed to deny ill travellers. Guatemala has no registered cases of the Novel Coronavirus yet.

MEXICO: Thousands of women “disappeared” from public life yesterday as planned, drawing attention to the thousands of women who are murdered each year in Mexico. Businesses stayed closed, subway cars ran empty, and one business organization estimated the losses would total $1.37 billion. The strike followed a potentially record-breaking march on Sunday, in which 80,000 people walked through the streets of Mexico City. Reuters reported confrontations with anti-abortion activists who made Nazi salutes and incidents around the city that injured 67 people.

MEXICO: President Andrés Manuel López Obrador announced yesterday that BlackRock, a U.S. investment firm with $7.4 trillion in assets, may invest in the so-called “Mayan Train.” BlackRock recently received attention for its promise to sell $500 million in coal investments and divest one of its funds from Canadian oil sand development. Critics say the finance manager is not doing enough, however, because it continues to hold stakes in companies that have contributed to deforestation in the Amazon. The Mayan Train would move tourists across the Yucatan Peninsula, but faces criticism because of its potential to irrevocably change the region.

UNITED STATES: A Chilean woman accuses U.S. Customs and Border Protection agents of strip searching her and raping her.  Geraldine Rodriguez, a celebrity dancer also known as “Geri Hoops,” flew from the Dominican Republic to Puerto Rico in mid-February. After the alleged assault, she was denied entry. Rodriguez texted with her family and the Chilean consul in Santo Domingo, asking for help, and then posted an Instagram video in which she told the story. The Miami Herald reported that the video prompted an investigation and that the agency had “concluded that the actions are unsubstantiated,” according to a CBP spokesperson.