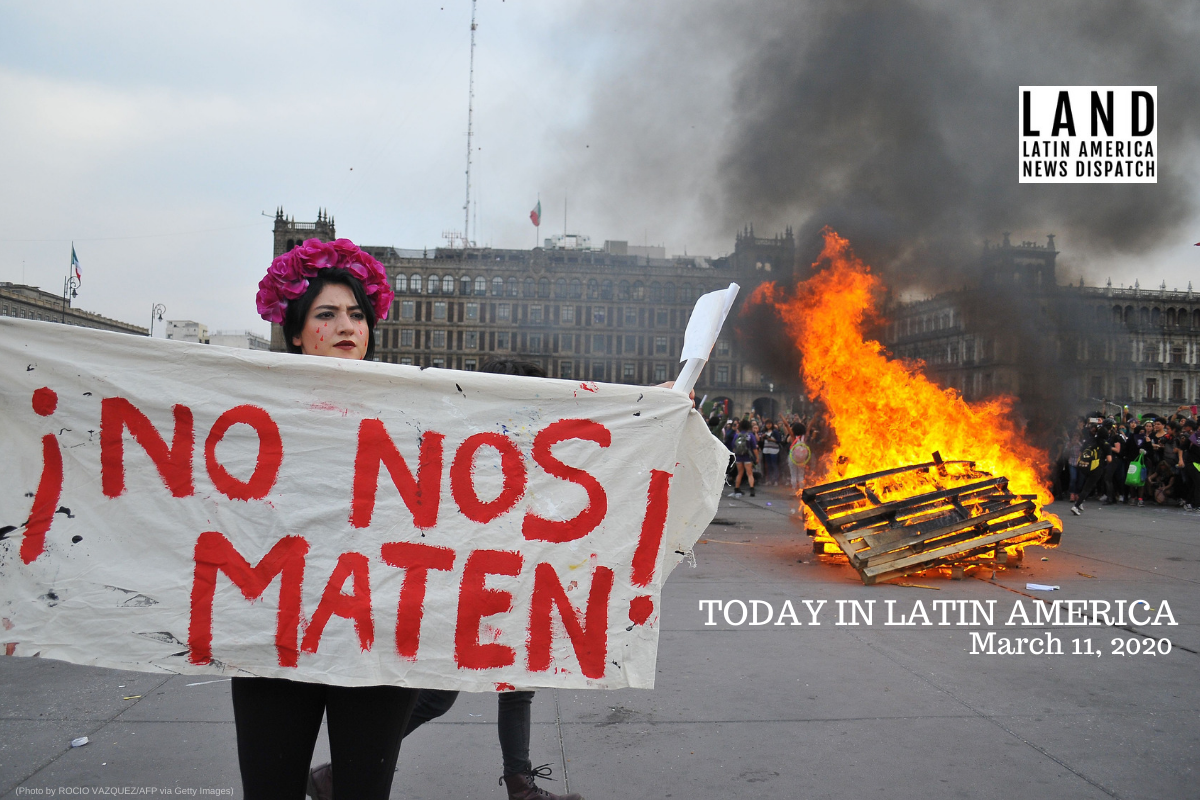 A woman holding a sign that reads "Don't kill us" takes part in a protest during the International Women's Day, in Mexico City, on March 8, 2020. (Photo by ROCIO VAZQUEZ/AFP via Getty Images)

MEXICO: According to President Andrés Manuel López Obrador (AMLO), two days of mass protests against femicides will not change his government’s policy on gender-based violence. In a press conference on Tuesday, López Obrador said he will continue to “reinforce the same strategy of addressing the causes that create the violence.” He said that he doesn’t agree with the demands of many of the feminist organizers.

“I believe we have to moralize the country, purify public life and strengthen cultural, moral and spiritual values,” López Obrador said. AMLO also said he was worried this week’s protests were being taken advantage of by his opposition to “hurt his government.”

Tens of thousands of women marched through Mexico City on Sunday in recognition of  International Women’s Day. On Monday, women held a “Day without Women” with an untold number of women not attending work and school. The brutal murder of a 7-year-old girl in February and continued femicides provoked the recent protests. According to official statistics, almost 4,000 women were murdered last year.

BRAZIL: During a press conference in Miami, President Jair Bolsonaro called the Coronavirus (COVID-19) “a fantasy” and said that the global media is “exaggerating” the situation through its coverage. Bolsonaro met with U.S. President Donald Trump yesterday, after closing a historic military cooperation agreement. Brazil had the first case of the virus in Latin America and declared a national health emergency in early February. As of Monday, Brazil has confirmed 25 cases. According to a study by Johns Hopkins, COVID-19 has already caused more than 4,000 casualties.

The list was discovered by a group of journalists at the Public Issue Portal, who were notified of being added to the group after publishing tweets about the “Ñeñe Política” scandal. The list was quickly deleted, but also included members of Colombia2020, a journalistic initiative of El Espectador. The official army account stated that the use of the term “opposition” was a mistake.

VENEZUELA: Security forces fired tear gas at opposition members as they marched to downtown Caracas to regain the control of the national legislature. Led by National Assembly President Juan Guaidó, the group banged on pots and threw rocks at security forces. Guaidó said he hoped the march would convince Venezuelans to join the movement against Maduro and revive the protests of 2019. Three opposition lawmakers were later arrested.

REGION: Panama and Jamaica confirmed their first cases of the coronavirus yesterday. In Panama, the patient had recently traveled to Spain, where the virus is spreading more rapidly. Meanwhile, in Jamaica, the patient had recently traveled to the United Kingdom. Both patients are currently in quarantine. Costa Rica also raised its confirmed case count to 13, and its suspected case count to 179. Although Latin America and the Caribbean have notably lower numbers of coronavirus cases than the rest of the world, case counts have been increasing.

PUERTO RICO: NBC News obtained a letter sent by Puerto Rican organizers on the mainland to Gov. Wanda Vázquez asking why her government has been slow to use disaster aid funds allocated to Puerto Rico after Hurricane María. Power 4 Puerto Rico, a coalition of more than a dozen advocacy groups, wrote to Vázquez two weeks ago, after discovering the government had only used $15.2 million of a $1.5 billion allocation from the Department of Housing and Urban Development under its Community Development Block Grant-Disaster Recovery Program. The Vázquez administration has not responded.

GUATEMALA: Maria Ochoa, a Guatemalan migrant from San Marcos, died while in U.S. custody yesterday. Ochoa, who was detained by U.S. Immigration and Customs Enforcement while entering the United States in September, had recently passed a “credible fear test” for her asylum application. The Guatemalan government released a statement saying that she had surgery on her gallbladder in Oklahoma on February 7 and died yesterday in a Houston, Texas hospital. ICE reported that her cause of death was “autoimmune hepatitis, complicated by septic shock and acute liver failure.” Ochoa’s death is the eighth to occur in ICE custody in the 2020 fiscal year.

MEXICO: Finance Minister Arturo Herrera stated on Tuesday that Mexico is seeking to mediate the oil price war currently being waged by Russia and Saudi Arabia. Herrara also said the government’s budget will not be impacted, as it is protected by the world’s largest oil hedging program. The program covers Mexico’s 2020 income from oil, at an average of $49 a barrel. Oil prices plunged by 25% to $31 a barrel on Monday, after Russia walked away from an OPEC deal to cut production.

UNITED STATES: The Supreme Court is currently debating another emergency relief request from the Trump administration to send asylum seekers to Mexico while they are processed. The Supreme Court is set to release a verdict on March 12. The Trump administration has already sent 160 troops to critical points anticipating a migration surge in case of a negative decision. If the judges deny Trump’s emergency relief request, the “Remain in Mexico” policy would be halted in the entire 9th Circuit. Lower courts have already decided that the policy does not uphold U.S. and international obligations to asylum seekers.