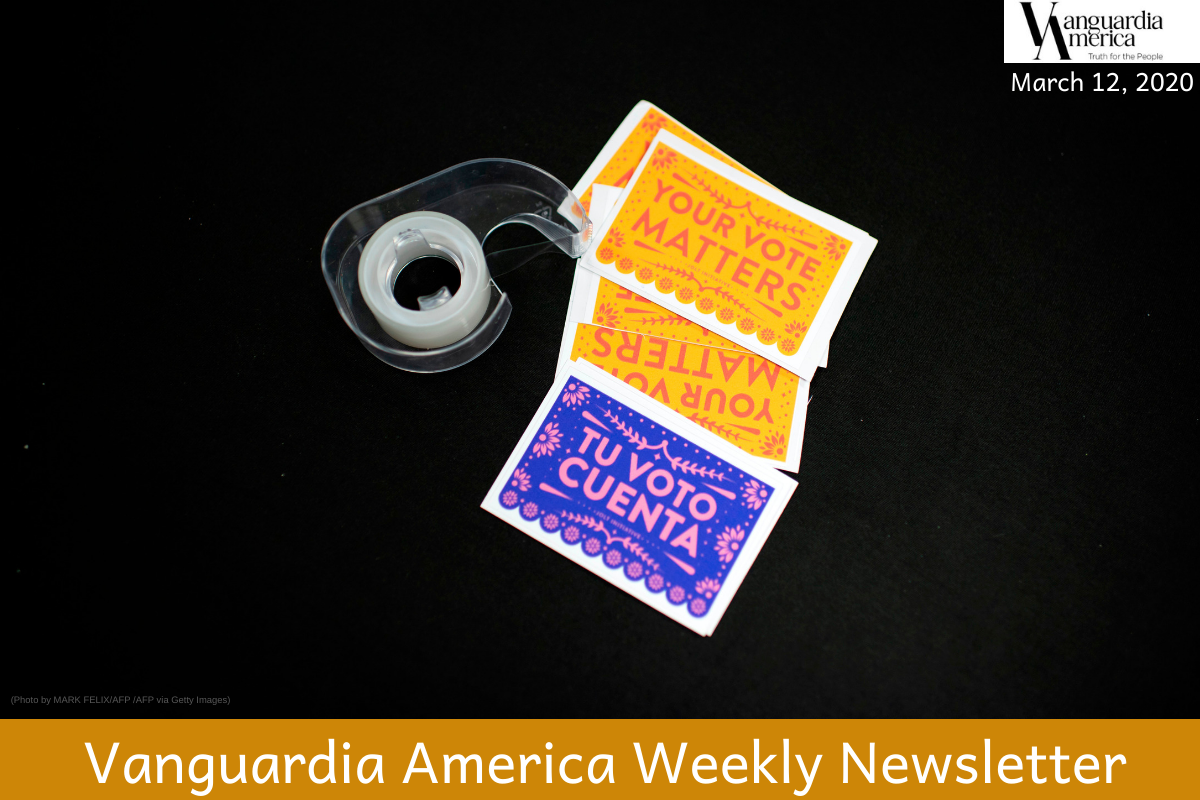 Stickers in Spanish and English and a roll of tape sit on a table at the headquarters of Jolt, a non-profit organization that works to increase the civic participation of Latinos in Texas, in Houston, Texas on February 20, 2020. (Photo by MARK FELIX/AFP /AFP via Getty Images)

Vanguardia America is a community partner of Latino USA and Latino Rebels.

Sanders may have hurt his already weak chance to win Florida, home to a large Cuban American population, after he praised Cuba’s dictatorship for boosting Cuba’s education system. The Telemundo poll found that 70% of Florida Latinos would not support a “socialist” candidate. Sanders is a self-described democratic socialist. In Arizona, major inroads progressive grassroots groups have laid the ground for Sanders’ strong support among Latino voters.

The rate of Latino homeownership grew for the fifth year in a row in 2019, according to the National Association of Hispanic Real Estate Professionals (NAHREP). In its annual study, scheduled for release later this month, NAHREP found the rate of Latino homeownership increased from 47.1% to 47.5% in 2019. According to the Census Bureau, the homeownership rate for all U.S. residents is 64.3 %. In its report on 2018 housing trends among Latinos, NAHREP predicted that the number of Latino households would grow by 4.6 million between 2015 and 2025.

The Trump Administration ordered U.S. immigration judges to remove signs detailing how to prevent the spread of coronavirus, but quickly reversed its order when the judges publicized the order. Salon reported, “Hours after the National Association of Immigration Judges revealed [the no signs] directive, the government reversed course…” without explanation. According to the online magazine, the short-lived coronavirus poster controversy was just the latest example of the Department of Justice’s hostility toward immigration judges and the president’s dismissive attitude regarding the spread of the global pandemic.

In other immigration news, a federal appeals court has blocked the Trump administration policy ordering asylum seekers to wait in Mexico for a U.S. court hearings. The 9th U.S. Circuit Court of Appeals only blocks the government’s  “Remain in Mexico” policy in Arizona and California. The Trump administration is asking the conservative-leaning U.S. Supreme Court to quickly rule on the matter. An estimated 60,000 asylum-seekers have been ordered to wait in Mexico for their court hearings since the program began in January 2019. Human Rights First and other advocacy groups have documented hundreds of incidents involving kidnappings, assaults, rape and even murders of asylum-seekers forced to wait in Mexico.

Thousands of women boycotted work and school in Mexico on Monday as part of an anti-violence protest called “A Day Without Women.” María de la Luz Estrada, coordinator of the National Citizen’s Observatory of Femicide, told the Associated Press, “In Mexico it’s like we’re in a state of war; we’re in a humanitarian crisis because of the quantity of women that have disappeared or been killed.” According to government data, more than 3,800 women, or about ten women a day, met “violent deaths” in 2019, a 7% increase over 2018. Thousands more across the country have been reported missing. Most of these crimes are never prosecuted, say women activists. On Sunday, hundreds of thousands of women marched in Mexico and other cities across the globe to mark International Women’s Day. In Pakistan, women marchers were pelted with stones and shoes. In Turkey, police tear-gassed women protesters.

About $20 billion in federal funds has been allocated by Congress for hurricane disaster recovery since Hurricane Maria struck the island in 2017, but only $15.2 million of the $1.5 billion specifically aimed at rebuilding damaged roofs has been spent by the Puerto Rican government, according to a letter obtained by NBC News. The letter was sent to Puerto Rico Gov. Wanda Vázquez by Power 4 Puerto Rico, a stateside advocacy coalition. Hurricane María ravaged the island in September 2017, but there are “30,000 families living under plastic blue tarps instead of permanent roofs,” Power 4 Puerto Rico said, and earthquakes in January have left thousands more homeless and living in tents.

As tropical storm #Dorian makes its way towards our vicinity, it's important to keep in mind that there are still tens of thousands of homes in #PuertoRico covered with blue tarps. This map we prepared shows the percent of houses that suffered roof damage, as verified by @FEMA. pic.twitter.com/u2xmKPH2Xv

The Federal Emergency Management Agency (FEMA) has also made $487 million available to build and repair roads, bridges, electrical grids and public buildings in Puerto Rico, but only $38.6 million of that money has been spent to date, according to the Government Accountability Office. Vázquez, who has not yet responded to the Power 4 Puerto Rico’s letter, was appointed governor in last summer after weeks of street protests forced the resignation of Gov. Ricardo Rosselló.