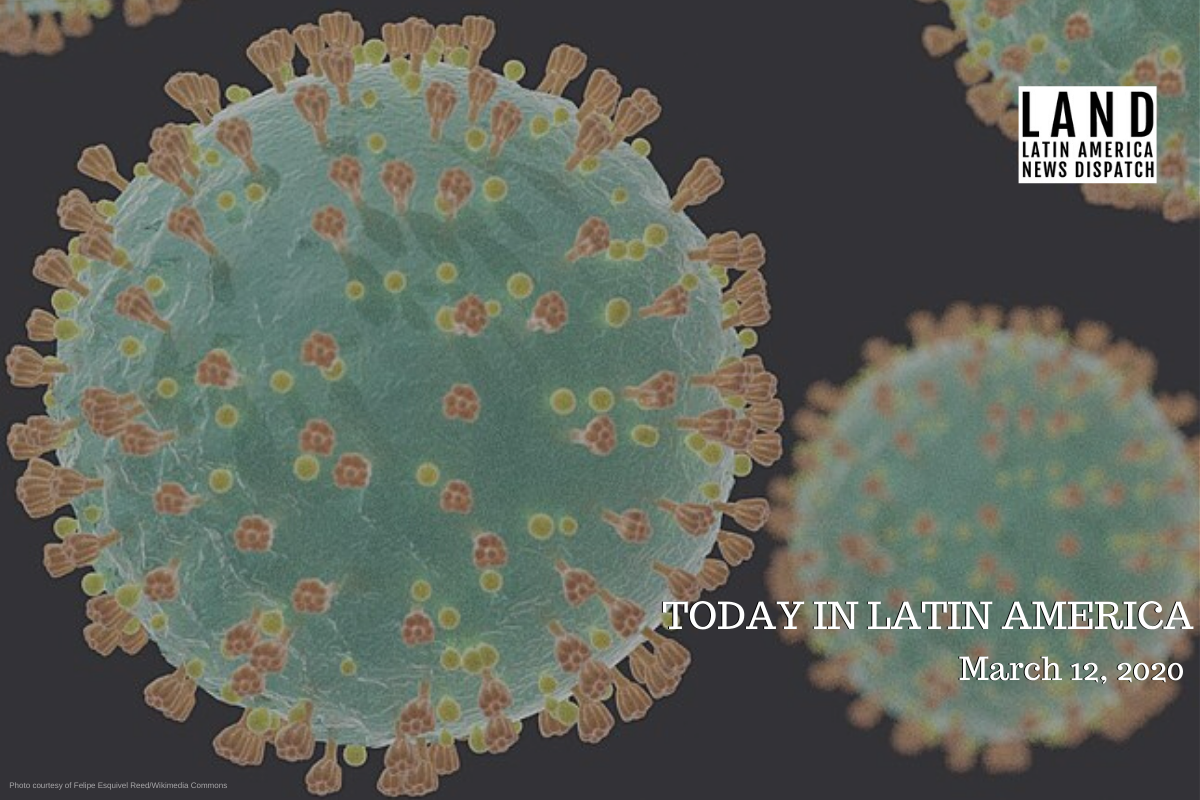 REGION: The World Health Organization officially labeled the spread of the coronavirus (COVID-19) a pandemic on Wednesday as countries across the region ramped up health measures and reported more confirmed cases of the virus.

In the Andes, Bolivian officials have declared a state of emergency after two women tested positive. Minister of the Presidency Yerko Núñez said the government was reallocating funds to support health efforts. In Colombia, officials confirmed six new cases, including one American who entered the country over the weekend. Peruvian officials postponed classes for all domestic schools after its confirmation number rose to 14, and President Martín Vizcarra allocated $47 million to public schools for hygiene measures. Countries in the Southern Cone focused on maintaining quarantine regulations, as the number of cases rose. Argentinian President Alberto Fernández said that a lack of compliance with quarantine protocols constitutes a crime, and urged citizens to self-quarantine. After confirming 52 cases, health officials in Brazil released a new plan for combating the virus, which includes extra resources for the elderly. On Thursday, Jair Bolsonaro’s communications director tested positive for the virus.

In the Caribbean, Cuba reported that three Italian tourists who had traveled to the island on Monday are the country’s first confirmed cases of the virus. Meanwhile, Panama reported the first death in Central America as the country’s number of confirmed cases rose to 11 people in a span of 48 hours. Honduras confirmed the country’s first two cases of the virus. Costa Rica documented an increase of nine cases in one day, bringing the total to 22, and the Health Minister stated that the number of suspected cases exceeds the country’s testing capacity. Guatemala, for its part, banned the entry of all citizens of European countries, Iran, China, South Korea and North Korea, though the country has not confirmed any cases thus far. El Salvador also took preventive measures despite having no confirmed cases and decreed a nationwide quarantine lasting for 21 days, suspending classes nationwide and prohibiting large gatherings of people.

URUGUAY: The country is withdrawing from the Union of South American Nations (UNASUR) and will return to the Inter-American Treaty of Reciprocal Assistance (TIAR), according to Foreign Minister Ernesto Talvi. In a statement to the press issued Tuesday, Talvi said the country was leaving because the international body “has stopped working.” Uruguay left the TIAR in September, after it dissented with a majority vote to support the removal of Venezuelan President Nicolás Maduro. As of this week, only Guyana, Suriname and Venezuela remain in UNASUR.

COLOMBIA: National Police Director Oscar Atehortua was charged with corruption on Wednesday, after the Office of the Inspector General accused him of misusing funds allocated for police force housing. The office alleges that he also provided information about internal corruption investigations to officials who were possibly involved in stealing government allocations. Atehortua was also named in a Human Rights Watch report released Tuesday, which claims he oversaw the use of excessive force and abuse by police forces against protesters last year. The case will be investigated by the Prosecutor General’s Office.

PUERTO RICO: A former Federal Emergency Management Agency (FEMA) employee who worked in Puerto Rico after Hurricane Maria pleaded guilty to corruption charges relating to her mismanagement of relief efforts in the island. Jovanda Patterson was charged in September on counts of fraud and conflict of interest for her involvement in facilitating government contracts for the firm Cobra Acquisitions LLC to restore the island’s power grid after the storm. She illicitly advanced these contracts for the firm while she was simultaneously in the process of being hired by Cobra Acquisitions LLC. Patterson’s sentencing hearing is scheduled for June 11. She faces a possible sentence of up to five years.

NICARAGUA: Over 100,000 people have fled the country since government crackdowns began in 2018, according to the United Nations High Commissioner for Refugees. The UN refugee agency expects these numbers to rise as Nicaraguans continue to seek asylum abroad at a rate of 4,000 people per month. Since 2018, neighboring Costa Rica has taken in the highest number of Nicaraguan refugees and asylum-seekers, totaling at around 77,000 people out of 103,600 seeking refuge globally. In April of 2018, protests against President Daniel Ortega broke out across the country, and the subsequent government crackdown left over 300 people dead, more than 2,000 injured, and at least 777 people arrested.

UNITED STATES: In a nation-wide address, President Donald Trump declared a ban on travel from the United States to all countries in Europe except the United Kingdom for the next 30 days amidst fears of the spread of the coronavirus. Travel restrictions will also be placed on Americans returning from European countries. Foreign nationals who have been within the banned European countries for the past 14 days will have suspended entry into the U.S. Trump also called for legislative action to provide payroll tax relief and other measures for those affected by the virus.

BORDER: The Supreme Court ruled that the Trump administration’s “Remain in Mexico” policy will remain intact, despite an appeals court ruling that it was illegal. The move to uphold the program is the latest of several Trump policies to be approved by the Supreme court after being overturned by lower courts. The policy forces asylum seekers at the border to await their U.S. court hearings in Mexico. Approximately 60,000 migrants are currently awaiting to have their cases heard at the border. Since the implementation of the policy, U.S. immigration courts have experienced a significant backlog as well.

MEXICO: A subway crash in Mexico City caused 41 injuries and one death, disrupting public transportation on Wednesday. Around 16 victims are currently being treated at hospitals, and the cause of the crash is still being investigated. Mayor Claudia Sheinbaum tweeted about the incident, stating that none of the injuries were life threatening. The train is expected to be back in service by Thursday morning.