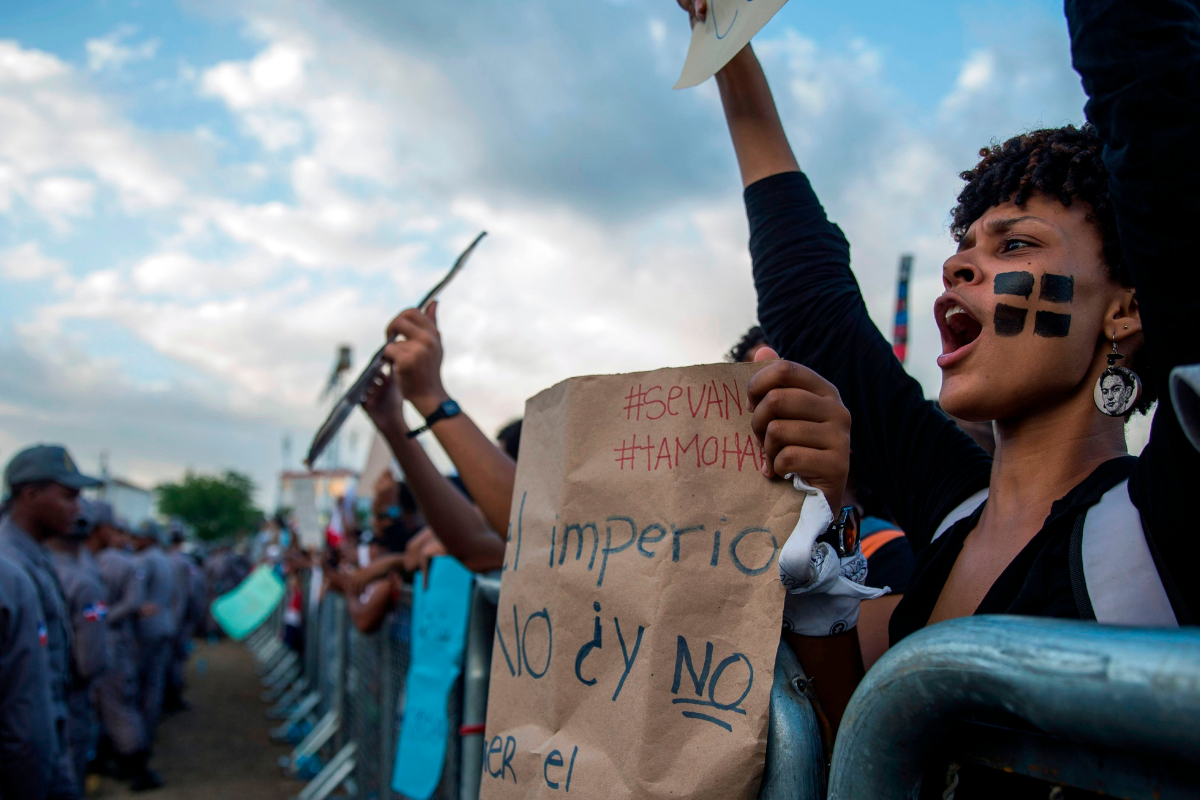 A woman shouts slogans during a protest in front of the Central Electoral Board (JCE) in Santo Domingo on February 19, 2020, three days after electronic voting systems failed. (Photo by ERIKA SANTELICES/AFP via Getty Images)

On Sunday, the Dominican Republic held municipal elections following a month of protests that started on February 16, when the elections were initially postponed. Many voters dressed in black as a symbol of the ongoing protests, and while voter turnout was low and reports of irregularities flooded social media, the country’s opposition party is projected to win across different regions.

With votes still being counted, the Modern Revolutionary Party (or PRM) is ahead in key major cities, including Santo Domingo’s mayoral race, where a woman was selected for the first time. Local media is speculating the ruling party, the Dominican Liberation Party or PLD, will likely fail to win 25% of municipalities.

Economist Carolina Mejía won Santo Domingo’s mayoral race with 57.95%, followed by the PLD, which obtained 31.34% of the votes, with 54% of the electoral colleges reporting. The PLD is projected to remain in power in Santiago de los Caballeros, the nation’s second-largest city, where the mayor won a second term.

“Change has started today, and this is only the beginning,”  the PRM’s presidential candidate Luis Abinader said. Presidential elections are scheduled for May.

Meanwhile, citizens on social media reported irregularities from both the ruling party and the opposition, including accusations of vote-buying or voter intimidation tactics like vote monitoring, and the presence of campaigners close to the voting sites.

A Month Of Protests And Dialogues

Last month, the Central Electoral Board (Junta Central Electora or JCE in Spanish) abruptly canceled elections less than four hours after they began following reports of glitches on newly installed voting machines. This caused widespread indignation across the country, as thousands of people flooded the streets in the capital and other cities demanding answers and accountability.

“The truth is I’m afraid and feel really worried. It’s impossible not to feel worried about the future and what could happen,” Michelle Ricardo, a local artist and educator told Latino USA at the time. “Dictatorship is right around the corner. Actually, it’s already there. All that’s missing is for the state to say it, but it’s there.”

Many saw this as a fraud attempt by the PLD, which has been in power for close to 20 years. For protesters, this was the last straw in a serious of corruption allegations and other grievances they have with the local government.

The largest protest happened on February 27, when instead of Independence Day celebrations, a massive rally was held in Plaza de la Bandera, across the street from the Central Electoral Board headquarters. Following the widespread demonstrations, the Social and Economic Council began organizing dialogues with members of the different parties in order to handle the ongoing crisis, but with little success. Activists disrupted one of the meetings by banging pots, demanding to be included.

By March 7, organizations instead set up a separate dialogue with over 20 civilian groups and representatives of all political parties (including the PLD). One moment, when Ingrid Luciano of La Plaza Alzá spoke, went viral. Luciano demanded that the dialogue process not stop the protesters from continuing to make their demands. She also said she didn’t agree with the Organization of American States being asked to monitor the elections.

“The Dominican state passed on [responsibility] to the Organization of American States, supposedly to grant transparency,” Luciano said.

“The same OAS which allowed the U.S. invasion of 1965 against which this country fought,” she added to resounding applause.

During Sunday’s election, claims of vote-buying and voter intimation tactics continued against the ruling and opposition party. The Citizen’s Participation (Participación Ciudadana) group said that vote-buying was seen across the country. One moment in particular, where two men were arrested for allegedly attempting to buy votes, went viral after it was recorded.

Another test to Sunday’s election was the growing concern over the spread of the coronavirus. There have been 21 confirmed cases of coronavirus in the country, with the first death being reported Monday morning.

Officials still held elections, citing that special measures had been taken such as the cancellation of flights from Europe, China, South Korea and Iran. Activists and civilian groups also prompted people to vote.

“If you could stand in line without protecting yourself and without fear of becoming contagious, why not make a line to vote and pick your future?” the Somos Pueblo RD group posted on social media, under a photo of customers standing in line at the supermarket during a coronavirus shopping frenzy.

Throughout the day, Dominicans posted a photo of their tinted finger with the hashtag #DeitoChallenge (little finger challenge) to show that they did in fact vote.

“I protested, I voted,” one voter named Danyfer Mota, wrote in her caption.