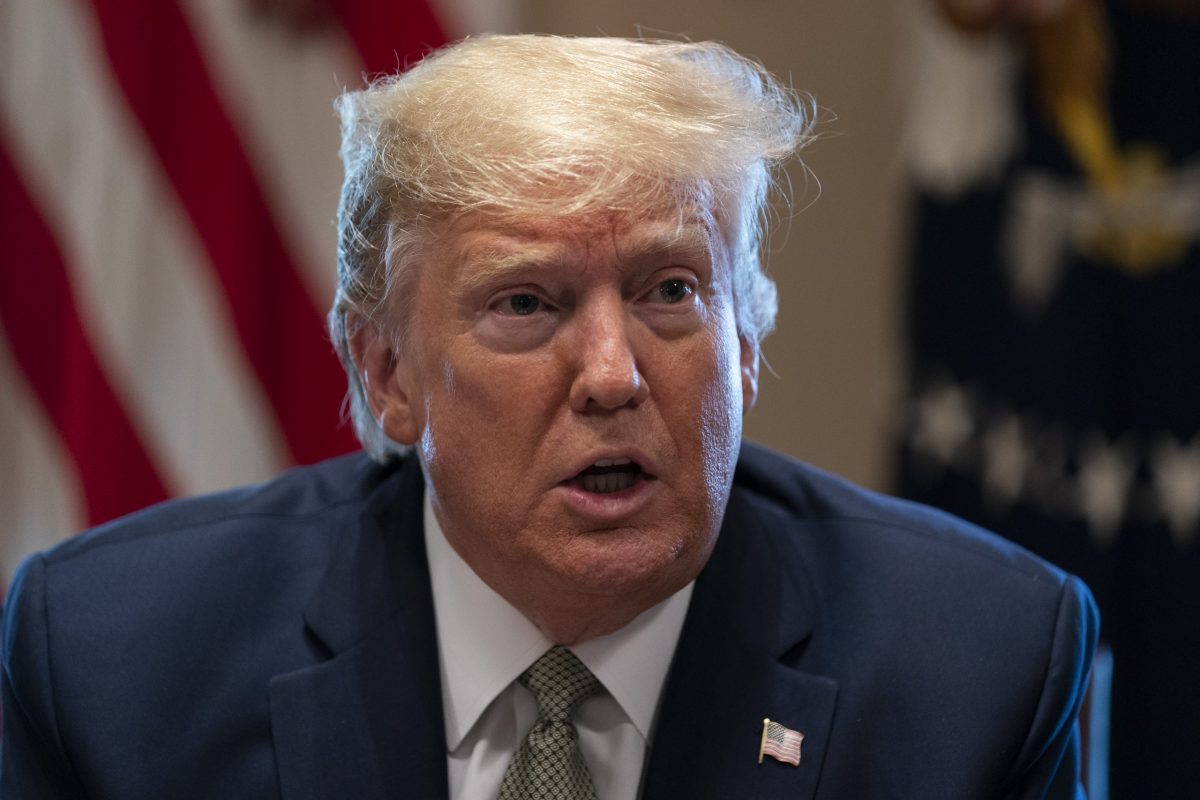 President Donald Trump speaks during a meeting with tourism industry executives about the coronavirus, in the Cabinet Room of the White House, Tuesday, March 17, 2020, in Washington. (AP Photo/Evan Vucci)

SAN DIEGO (AP) — The Trump administration is considering a plan to turn back all people who cross the border illegally from Mexico, two administration officials said Tuesday, using powers they say the president has during pandemics like the coronavirus outbreak to mount what would be one of the most aggressive attempts to curtail illegal immigration.

The plan is under consideration and no final decisions have been made, according to the officials, who spoke to The Associated Press on the condition of anonymity because the plan hasn’t been announced.

The officials said the president has authority to take such action in a pandemic and that Mexico’s efforts to stop the spread of the coronavirus, along with Venezuela’s, have been the weakest in North and South America. The officials said its authority relies on a law that gives the president authority to deny entry to people or to reject cargo if the Surgeon General determines there is “serious danger” of bringing a communicable disease to the United States.

The administration had declared in November 2018 that anyone who crossed the border illegally from Mexico would be denied asylum, a measure has been blocked in court. Last month, a 9th U.S. Circuit Court of Appeals panel in San Francisco upheld a lower court decision to keep that asylum ban on hold while a lawsuit proceeds.

The ban now being considered, which was first reported by The New York Times, would turn back to Mexico all people who cross the border illegally, not just those seeking asylum.

Homeland Security Department spokeswoman Heather Swift said the president was focused on protecting Americans from the coronavirus and that “all options are on the table.”

“Decisions relating to the pandemic should be guided by public health officials, not by the Trump administration’s long-standing agenda to close the border to refugees seeking asylum,” said Eleanor Acer, Human Rights First’s director of refugee protection. “The administration is using the pandemic as a pretext to advance its long-term goal of curtailing asylum rights for people fleeing persecution.”

A third official familiar with the administration’s decision making and unauthorized to speak publicly said there was some alarm within the government and health care community about the health of people at the Southern border, and there could be consequences without further restrictions. The official noted that some migrants are coming over the border from countries with confirmed cases of the virus.

But the proposal is also in line with Trump’s overall policies on migrants, especially poor people arriving at the border, and his desire to clamp down on immigration. It would be the effort to deter asylum and illegal immigration on the Mexican border. About 60,000 asylum-seekers have been returned to Mexico to wait for hearings in U.S. immigration court since January 2019 under its “Remain in Mexico” policy, which the Supreme Court ruled last week could stay in effect during a legal challenge. The officials didn’t detail the mechanics of how this new effort would work.

Many migrants who are forced to wait in Mexico live in squalor in makeshift camps as they wait out their court cases to stay in the U.S., often facing violence and poverty. On Tuesday, some 30 asylum-seekers, many with children, wore masks to court in El Paso, Texas.

One U.S. official told the AP that people who cross the border illegally would still be processed by the Border Patrol, which has limited ability to so without taking people to a station. Mexico can refuse to take back non-Mexicans, but the Trump administration hopes the measure will increase pressure on Mexican authorities to address the public health threat.

Since November, the administration has denied asylum to hundreds of people from El Salvador and Honduras and flown them to Guatemala with a chance to seek protection there.

There were more than 851,000 arrests for crossing the border during the 2019 fiscal year, which ended Sept. 30. The new policy would not apply to asylum-seekers who present themselves at land ports of entry, the official said.

For most people, the new coronavirus causes only mild or moderate symptoms, such as fever and cough. For some, especially older adults and people with existing health problems, it can cause more severe illness, including pneumonia. The worldwide outbreak has sickened more than 180,000 people and left more than 7,000 people dead. In the United States, there have been more than 4,000 confirmed cases and scores of deaths.

The Associated Press receives support for health and science coverage from the Howard Hughes Medical Institute’s Department of Science Education. The AP is solely responsible for all content.